WHO WILL BE THE PALMETTO STATE’S NEXT LIEUTENANT GOVERNOR?

The South Carolina Supreme Court has exercised its right to hear a petition that could decide who becomes the Palmetto State’s next lieutenant governor.

Wait … isn’t that something that ought to be pretty well-established?  Like … in the State’s Constitution or something?

Yes.  It is.  But like a lot of other things “set in stone” (ahem) in this glorified banana republic, “it’s complicated.”

Allow us to explain: Up until this point in Palmetto political history, candidates for governor and lieutenant governor have always sought election independently.  Meaning they could be elected from different parties (albeit usually both subscribed to the same, failed big government ideology).

In 2012, though, South Carolina voters passed a referendum to amend this process – allowing governors and lieutenant governors to run together on a ticket (like presidents and vice-presidents at the federal level).

Simple, right?  Not in this state, apparently …

A debate over the effective date of this amendment has created something of a constitutional crisis – one exclusively exposed by this website back in November.

Now the court will step in and decide the matter – a rare flash of independence in the face of powerful legislative leaders who sought to shut the case down last month.

The immediate question?  How the state’s office of lieutenant governor should be filled in the event its current occupant – Henry McMaster – ascends to the governor’s office following the likely confirmation of current S.C. governor Nikki Haley as the next American ambassador to the United Nations. 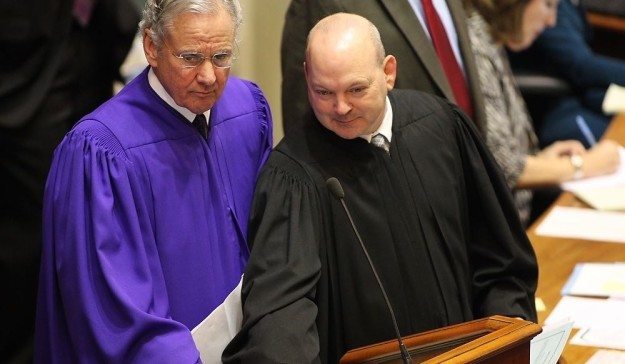 As it stands now, the office vacated by McMaster (above) would be filled automatically by the president of the State Senate (whoever that happens to be the time) – but some are arguing that the thick-drawled future governor has the right to appoint his successor.

That’s because the 2012 amendment approved by voters – which had an effective date of November 2018 – was somehow entered into the record book as being effective in May of 2014. If the 2014 date is valid, it would mean McMaster gets to fill the post.  It would also mean a previous executive succession that took place back in June 2014 was unconstitutional.

Crazy, huh?  Yes … until you have the opportunity to listen to the average state lawmaker try and craft a coherent sentence.  Or until you take a gander at this state’s math scores.  Then it becomes a lot clearer.

Why does all this matter?

Well, as we learned two-and-a-half years ago, people aren’t exactly breaking down the door to become lieutenant governor of South Carolina.  In fact, those in line for the job don’t want it.  And have previously refused to take it.  The office is part-time, largely ceremonial and affords its occupant very little in the way of real power.  That’s why the man currently in line to assume its “authority” – powerful S.C. Senate president Hugh Leatherman – has made it clear he will not be accepting the job.

The Supreme Court’s decision to hear the case represents a major victory for S.C. Senator Tom Davis – a third-term lawmaker from Beaufort, S.C. who filed the petition.  As noted, Davis was opposed by Leatherman and leaders in the S.C. House of Representatives, but S.C. attorney general Alan Wilson agreed with him that the court should take the case.  So did former S.C. Senator Larry Martin, who shepherded the amendment in question through the S.C. Senate back in 2012.

A decision is likely to come quickly.  The court has instructed attorneys to submit their arguments on an expedited timeline – with briefings due no later than January 17 (the day before Haley is scheduled to appear in Washington, D.C. before the U.S. Senate).

Talk about cutting it close …

FITSNews has been breaking most of the developments related to this case, but news of the court’s decision to hear Davis’ petition was first reported by Cassie Cope of The (Columbia, S.C.) State newspaper.