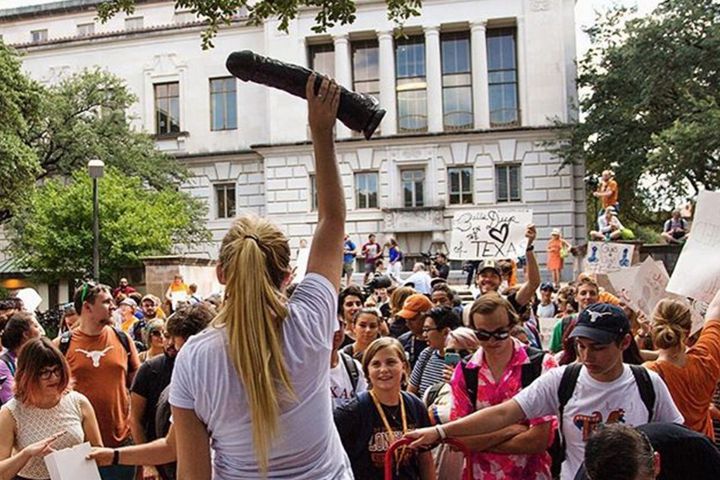 NOW THIS IS HOW YOU PROTEST …

This website’s views on the Second Amendment are abundantly clear.  Not only do we support it, we have consistently urged civil disobedience of any statute which infringes upon it.

Accordingly, we welcome laws, ordinances or statutes which affirm the right to bear arms … although we would argue in a truly free country such measures are superfluous.

One such pro-gun measure was recently approved at the University of Texas at Austin – a hotbed of political correctness.  The measure – which actually applies to all government-run universities in the Lone Star State – permits students with concealed handgun licenses to bring guns on campus.

“Campus carry,” in other words.

In response to the new Texas law, a group of students led by 20-year-old Rosie Zander have formed a movement called “Cocks Not Glocks.”

You read that right … Cocks Not Glocks.

One of the veiny phalluses carried by Zander weighed in at a whopping ten pounds.

Now that’s commitment to the cause …

While we support campus carry, we’ve got to give Zander and her crew credit for coming up with an absolutely ingenious protest idea.  “Cocks Not Glocks” is brilliant.  It rhymes.  It is prurient.  It creates a masterful false equivalence.

And perhaps best of all … it could lead to a myriad of “unintended consequences” among this horde of liberal twenty-something females, many of whom are at the peak of their willingness to experiment sexually.

Wait … that was last graph supposed to have been “thunk” not typed.  Oops.

Anyway, as this website has repeatedly pointed out the math on this debate is simple: more guns = less crime.  And that’s not just anecdotal, that’s based on government data.

Yet while this website will never embrace a movement that seeks to suppress the Second Amendment, we’re finding it “hard” not to derive some enjoyment from this particular protest.