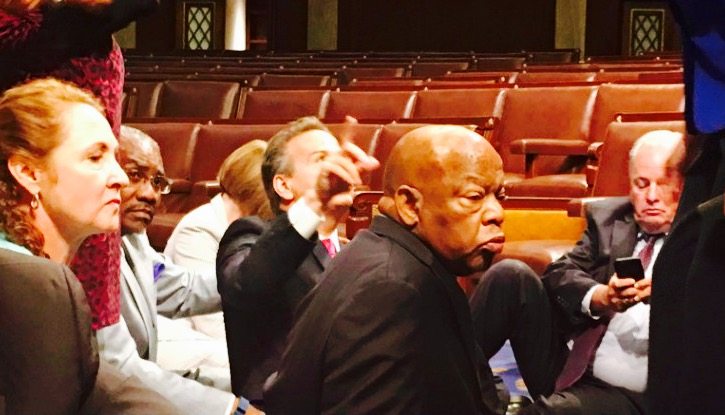 GUN GRABBERS AT IT AGAIN …

Approximately forty liberal members of the U.S. House of Representatives staged a “sit-in” on the floor of the “Republican-controlled” chamber this week to show their support for sweeping new anti-Second Amendment laws.

The sit-in – led by liberal lawmaker John Lewis of Georgia – was accompanied by chanting and other disruptive behavior, which is apparently fine so long as liberals are doing it in an effort to deprive us of one of our most fundamental constitutional liberties.

“We cannot let another moment of silence happen on the House floor without acting,” liberal Democratic leader Nancy Pelosi said.

The drama is the latest reactionary anti-gun rhetoric to follow from this month’s mass murder at a gay nightclub in Orlando, Florida.

This website has been – and will continue to be – a relentless advocate for gun rights.  If we’ve said it once, we’ve said it a million times: More guns = less crime.  Hell, the government’s own stats prove it.  But even if they didn’t, there’s still the matter of the U.S. Constitution – which expressly forbids government infringement on the right to bear arms.

Not only do we “cling” to that inalienable right, we actively encourage the civil disobedience of any gun law (federal, state or local) that infringes upon it.