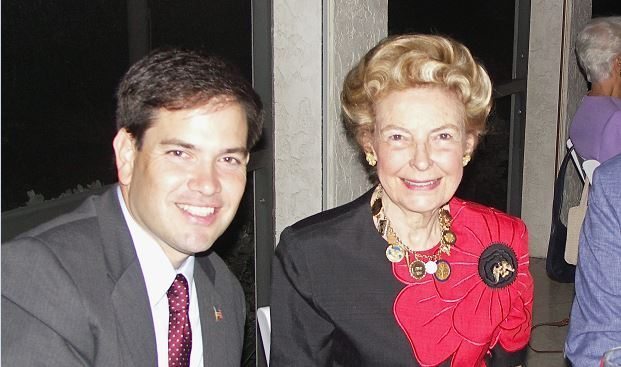 PHYLLIS SCHLAFLY: RUBIO “A LACKEY,” AND AN “ESTABLISHMENT AGENT”

We don’t know much about Phyllis Schlafly … but our friends in Washington, D.C. tell us she’s a “gold standard conservative” as well as one of the founders and principal architects of the modern conservative movement in America.

Sort of like the “Dowager Countess of Conservatism,” if you’re a fan of Downton Abbey.

Anyway, Schlafly was also one of the early supporters of Marco Rubio‘s successful bid for the United States Senate six years ago.

“When Marco Rubio ran for the Senate in Florida, I think I was the first one to endorse him,” Schlafly told WND (who referred to her as a “legendary conservative activist”).

“I made a trip down to Florida in 2009 just for the purpose of helping him,” she added.

Schlafly added Rubio was “a lackey for the establishment now.”

“There’s no question they’re picking (him) as Plan B – or maybe Plan C in this election cycle, or whatever we’re on now – but he certainly is an establishment agent,” she said.

This website has consistently opposed Rubio – not because of all the rumors circling about him – but because he’s a crony capitalist who views liberty with contempt.  We also oppose him because he supports energy tax hikes and mindless imperialism – and because he cast the deciding vote in support of U.S. president Barack Obama‘s trade bill.

Oh, and as Schlafly said – he’s two-faced on immigration, too.

Inside The January Jobs "Whiff"

Rick Manning: Iowa Is “Up To The Task”

I don’t like Rubio but at least he has a heart for people who want to come to work in our glorious country. Dare to DREAM!

Yes. I don’t know Terry. At least I don’t think so. Let me check the closet.

Oh my!!! Rocky changed his original post in the last few hours about (Terry Ward aka Grand Tango?) Wonder why? Ha Ha….

ORIGINAL post:
Rocky Verdad shifty henry • a day ago
Yes. I don’t know Terry. At least I don’t think so. I know his employers.

You have been in it for awhile. I have a subpoena with your name on it. It will be served next week. Now whose laughing, joke man!

Please have it served after Valentine’s Day because I do have plans …..

He thinks some of the commenters here are hired by Will. At least that would mean those commenters are employed, which is a far cry better than the resident unemployed homeless troll pretending to be the DA and the FBI.

Hey Fannin I had a slip and fall at the local grocery store, help me sue! LMAO!!! I’m going to use the money to buy scratch off lotto tickets!

Go choke on a massive dick! Take a picture for Tango though! LMAO!!!

In other news – Lexington County Corner Names Woman Killed Friday – just hit the local media – you can find it at………….

I knew the people who run the Chronic – so what? I also know other people. Big deal. I actually changed it so as not to upset you. Guess it didn’t work. Are you stalking me Flip? Oh, and I haven’t talked to those owners in over 25 years. But proceed——-

My God this is getting so tiresome.

trump is going to implode sooner or later it would be better for the republicans if he did it sooner, he is a modern day mossolini, not in the politics he espouses but they are both full of shit making promises the can’t make while their supporters feed their egos

“Miscellaneous” was the one who made the Italian trains to run on time. We almost have no trains to be late…

“Once he got elected, he betrayed us all,” she said.

These posts are becoming rife with

Rubio is one of those politicians I was talking about recently. We work our buts off to elect “conservatives” to office only to find , after they get to Washington/ Columbia or whatever office. they immediately flounder to the middle as fast as possible. Trump and Cruz are the only ones that even try to be conservatives any more. Nobody in Washington will touch Cruz which tells me he is on the right track. All the establishment types are out to stop Trump one way or another. Again , this tells me I should be supporting him. The fact that he is self funded, not bought and paid for clinches the deal. Let’s Make America Great Again.

Marco is a guud maan. Mi hermano Raul and me, we lika him bery, bery mucho.

That’s good. I welcome your support. Only an idiot would offend or regect 25 million eligible legal voters.

Fidel, my friend! You remember me, Flip, your biggest fan, don’t you? LMAO!!!

reagan republicans don’t see it that way, reagan believed in compromise, and he signed an amnesty bill and don’t forget reagan came out in support of nafta.

Nice post and so try.The establishment and liberal MSM is trying to prop up any candidate that can defeat conservatism.

Will, keep up the good work. There’s an extra $40K in it for ya if he comes in fourth. This is gonna be huge, huge!!! Oh, and next time in the area, send Taylor over for an interview.

How many Rubio threads?

Someone must be worried.

“Once he got elected, he betrayed us all,”
Of course he did, the political atmosphere in Washington will dull your political senses.
Good on Phyllis Schlafly for calling it like a baseball umpire. “Call ’em like you see’em.”

And, how old is Phyllis these days, a hundred and ten?
Maybe, she was senile when she ignored his FL financial scandals when he jumped on the TEA Party train?
Rubio is a penny ante little crook just like Nikki Haley. If voters stopped electing people whom the cold, hard evidence shows are crooks before they get elected, they wouldn’t be disappointed after they’re elected.

Not to sound stereotypical, but I learned a long time ago not to trust gay men.

Rubio has a permanent case of flop sweat.