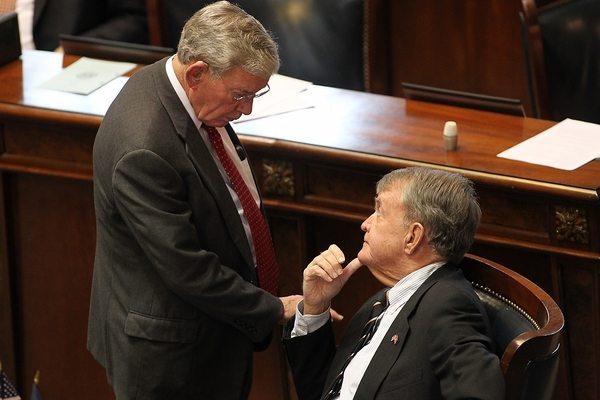 HE HAS SOME JUDGES HE WANTS APPOINTED …

It wasn’t just political retribution that led to a qualified attorney being dumped for a political hack on an influential judicial selection committee in South Carolina.  Apparently the influential leader who orchestrated the coup – S.C. Senate leader Hugh Leatherman – had an eye on getting some judges appointed, too.

The state’s “Godfather of Pork” – who has wielded almost unchecked influence in South Carolina politics for the last year-and-a-half – is pushing a pair of S.C. Supreme Court nominees with connections to his hometown of Florence, S.C.

One is Ralph King “Tripp” Anderson, chief judge of the state’s administrative law court. The other is Craig Brown, a circuit court judge.

Both hail from Leatherman’s backyard … and both happen to be among the five judges currently being considered for a spot on the S.C. Supreme Court.  Wanna guess whether one (or both) of them are among the three finalists chosen next week?

As we wrote in our prior column, “with all the talk of judicial reform in South Carolina, this is the perfect example of how real reform is never going to happen as long as lawmakers control the judges.”

“Competence should drive judicial selection, not politics,” we added.

Anyway, hearings of this committee – now effectively a rubber stamp for Leatherman and his cronies – will be held beginning on Monday, November 16.