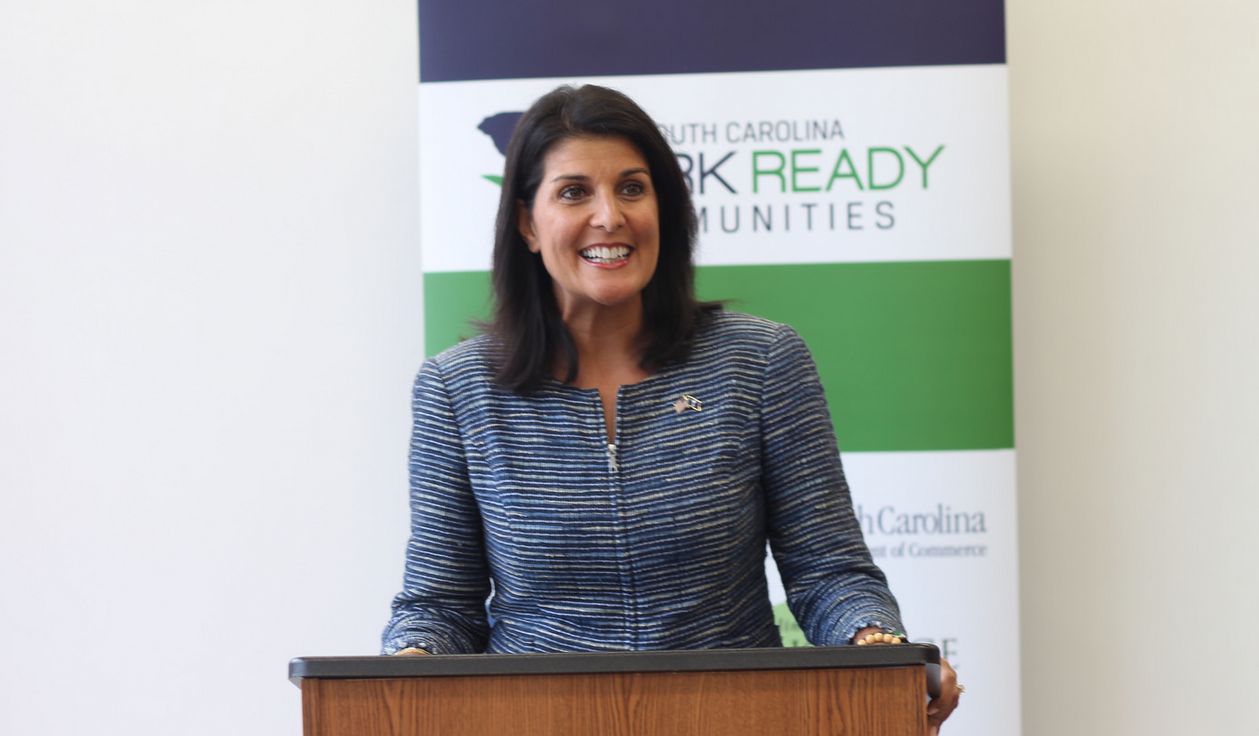 GOVERNOR HONORED BY ORGANIZATION SHE ONCE (RIGHTFULLY) CONDEMNED

When she was elected governor in 2010, then-S.C. Rep. Nikki Haley was a Tea Partier who decried crony capitalism.  In fact when the uber-liberal S.C. Chamber of Commerce endorsed her Democratic opponent, S.C. Senator Vincent Sheheen, her campaign went on the offensive.

“The state Chamber is a big fan of bailouts and corporate welfare, so it’s no surprise that they would prefer a liberal like Vincent Sheheen over a conservative like Nikki Haley,” her campaign said at the time.

We concurred with Haley’s assessment, accusing the organization of “command economic scheming for years, aggressively supporting new spending and bureaucratic expansion as a way of ‘stimulating’ government growth at the expense of the small businesses they’re supposed to be supporting.”

Seriously … the S.C. Chamber of Commerce has never met a tax or spending increase it didn’t support, and while it claims to be the “unified voice of business” in the Palmetto State the truth is it represents only those businesses getting government handouts.

Haley – who was elected governor opposing this sort of nonsense – is now the undisputed queen of the very bailouts and corporate welfare she once derided.

In fact she’s been so thoroughly subservient to these liberal special interests that the S.C. Chamber has decided to make her its 2015 “Public Servant of the Year.”

“We are blessed to live in a place where our Governor has put her heart and soul into making our state and the business community better,” said chamber president Ted Pitts, a former Haley staffer, in conferring the honor.

Well, we’re glad the “business community” is doing alright, but what about those income levels?  What about that lagging labor participation?

Haley had the right idea when she was running for governor: Put the people’s economic interests ahead of the government’s and the special interests.  Unfortunately, upon being elected she sold out to the status quo. Hard.

This “award” is further evidence of her ongoing betrayal …

Ya didn’t see that the first term ? Don’t answer, my bad.

I voted for her specifically because she presented herself as not being in the pocket of the chamber. I believed then, as I do now, that she had lied about not having an affair with Will Folks, and having hooked up with others as well, while married. I didn’t give a damn about that, though. Who, in her position, would not have lied about that?

But I did, indeed, figure out pretty early on in her first term that she was full of shit, and just as bad as Sheheen as a crony capitalist and suck-up to the big corporations.

CUE Hayley suck-up trolls saying there is no “proof.” Hey, if that were true, she could have produced her cell phone log, etc.

Also, on what planet does a happily married, non-cheating candidate for governor of a state win an election and then get named as the “other woman” in a lawsuit? Not this one, for sure.

She ought to sue your SORRY ass! Public official or not!

I hope the hell she does.

The same state that accuses a presidential candidate of fathering a black child out of wedlock.

Or rumors that he was a traitor while he was a prisoner of war during the Vietnam war.

The same state that accuses a senate candidate of being hooked up to booster cables.

The same state that sent a fake Christmas card to Republican activists in South Carolina claiming to be from the Romney family and including inflammatory quotes supposedly from the Book of Mormon.

You hit the bullseye!

I agree, however, I would like to know more about her relationship with her college roommate. I guess a lot of people go both ways.

Ted Pitts use to be a good guy. Now, just another political Whore, who sells to the highest bidder.

Can you say “Whore”?

Republicans = Democrats who hangout with racists.

Nikki’s entire cabinet is crony capitalists. All lawyers and business people who are tied to special interests.

The SC Chamber is nothing more than an Amway style scam. Any business owner that gives them money deserves to take it up the ass.

It’s such a terrible thing when someone is given an award for public service. A real career killer. HaHa!

Any governor we have will be in the pocket of the chamber, but at least this one took that racist flag away from the redneck racists. For that she has my thanks.

I have forgiven Haley for the flag.She had to appease American hating socialists and leftists like YOU before you burn’t the state down.

“…the truth is it represents only those businesses getting government handouts.”

Oh, you mean most of the significant and substantial businesses in SC? The ones that have the most impact? Welcome to The Reality Channel. Now available in your area.

Trikki Nikki is a first class politician and whore which is really unkind to whores in general. She supported the Confederate flag, decried federal support for other states after natural disasters, slammed lawyers, and the list goes on. Now the low class whore has reversed herself or in other words has become a first class fudge packer with her hand squarely around the bags of money.

I just hope she opens MOAR walmarts to save main street from Amazon.

Ted’s mother would be so ashamed and rolling in her grave as we speak. As far as Nikki, just shameful. Please seek higher office…we don’t want y’all back in Lexington.

At least Otie had some sense.

Public servant of the year…what a joke. Ted, was the award your idea or Nikki’s? I am guessing her idea.

Right, Tonto and just so ya know—when that Tea Train hits ‘em
in 2016—they will NOT be the only ones in the car

That’s right—there’s SC’s gutless U.S. House delegation
(except for Jeff Duncan) who voted for Boehner with a straight face

But we’ll RE-raise the Stars-and-Bars and lay Johnny Cash on
‘em—yep—it is STILL ours–we both VOTE and do like to brag !!!

By its nature Capitalism is cronyism.

What are all you nut nuts jabbering about?

Pitts, her former chief of staff giving her an award,. Go figure. Who coulda guessed it?

Pitts has tripled his salary since leaving private business, going into government and now sell access and taxpayer handouts.

Pearson was flat broke, now he is making 15 grand a month selling his contacts and Nikki Haley.

Service to the taxpayers. Selfless? I think not.