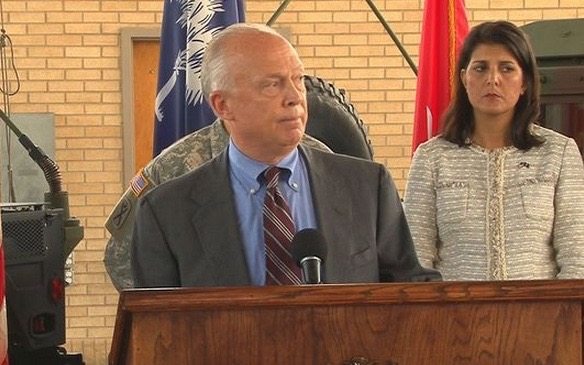 I preface this letter with a few things:

1. Regardless of anything and inclusive of everything – it’s okay. Because at the end of the day, I have the most beautiful little girl in the world.  I have a daughter that will always know, love and be cared for by me.  No one will ever take that away, nor could they.  She is truly my ‘Little Miss Pettrey’ and I am so grateful for that.  There is no ounce of regret in me over this child.

2. I have nothing negative to say about any member of the Eckstrom family, other than those I include in my message.  People are people – and I truly and humbly accept that we are all full of faults and make mistakes, myself not excluded.

People may have read what happened between “the SC Comptroller’s son” and I last October.  And to this day, there are so many things that could be said about that night’s incident – including my own regret.  How many errors occurred, how something minuscule (truly, yes I repeat, minuscule) was completely dramatized and falsified (even in a police report) because of who the son was.  How the state of South Carolina failed even me, the alleged victim, time after time.

But that is not what this letter is about.

Earlier this year, I wrote a letter to the editor sharing how hard it was to be pregnant as a single woman when the world looks down upon you.  No one knew what I was going through.  No one knew that I was supposed to be married.  No one knew where the ‘baby daddy was’ or what drama was behind that.  They just saw me as a single woman, pregnant, and the shame came. (I also wrote how despite any and all of that, I knew this child was a child of God and I knew she had a purpose).

No one knew what battles and demons I was facing in my personal life – well, unless of course, you were part of them, or knew those involved in them – i.e. S.C. Comptroller General Richard Eckstrom.

Richard Eckstrom, who convinced his son, (my ex-fiancée, Brad Eckstrom) that from day one “I wasn’t pregnant.” Until they realized, I was.  When that reality became undeniable, Richard convinced his son “it’s not his.” In fact, Richard Eckstrom claimed my daughter was “obviously Will’s” (yes, Will Folks, the editor of FITSNews.com – a man I’ve never even met in person).  Next, Richard suggested if it wasn’t Will’s child then it must have been my ex husband’s (who at the time of conception lived 400+ miles away from me … but you know, magic I reckon!).

But let me back up…

Right then and there, began the great amount of appreciation and respect I had for Richard.

But obviously, Richard Eckstrom is a devout Christian (or what we in the real world like to define as a ‘glib’ – someone who knows the act well enough to fool you, but is everything but).

So despite not being able to talk to my ex-fiancée, Brad Eckstrom – the father of my daughter – for seven months because of the glorious state of South Carolina failing me, (again the ‘alleged victim’), I still thought Brad knew better.  It was obvious that I was madly in love with him – even after seven months of no communication, I still desired nothing and no one but Brad.  And that obviously Brad – who spoke to me our entire courtship about how he wanted nothing more in life than to be a father – wouldn’t be clueless to the fact he was obviously the father.

I was that naïve woman that thought people could be trusted.

In April, after many failed attempts the “no contact” order was lifted (because I , ‘the victim’ had to hire a lawyer, thank you James Snell). Oh sweet relief -Brad and I could finally talk.  And talk we did.  And meet up we did.  And a short month later, our daughter was born.  Brad, who drove all night from South Carolina to Maryland so that he could be present at the birth – obviously because it was his daughter (or so I thought).

It wasn’t until the day after she was born, when I was sitting in the hospital bed, recovering from a c-section, filling out the birth certificate paperwork when I was shocked with the news that Brad refused to be on the birth certificate.  I didn’t get it.  We had been talking about it for a month – he knew it was his – he was eager for her to even have his last name.  But he still refused.

A few days later, (because Brad stayed with me and ‘our daughter’ for 2.5 weeks after her birth) we had a paternity test done.  Livid, embarrassed and ashamed, I sat in the Lab Corp office watching my daughter be swabbed, filling out paperwork, etc – all to prove that yes, Brad was in fact her father.

I didn’t understand it.  Since the “no contact” order was lifted, Brad and I had talked about how ‘excited’ we were.  How we were finally going to have our “Emily” that we so often talked and dreamed about during our courtship.

But then I was informed of Richard’s influence (and I should have known better, despite Brad being nearly a 40-year-old man). Richard – who was convinced this child was Will’s, who had been convinced initially that I wasn’t even pregnant.  Richard – who has constantly tried to tear me down, to my face and behind closed doors.  Richard Eckstrom, the man who claims to be a ‘God fearing Christian’ – and yet has done nothing but attempt to hurt me.

There is a book that could be written about how truly, truly, evil Richard Eckstrom is.  There could be several editions, actually – from all the different people Richard has hurt in his life.  I wish I could even begin to get into a tenth of it – so that the world can know just how much this man has truly attempted to hurt and destroy not just my life, not just my ex-husband’s life, but my sweet and innocent daughter’s life.

Richard Eckstrom – who took the man I loved more than anything, and despite everything wanted nothing more than to live ‘happily ever after with’ – and helped turn him into his protégé.

I apologize for the length of this letter– there’s simply so much that I want to say, with a brain that is scattered trying to think of all the pain and suffering I’ve had to endure because of these people, because of my experience with the state of South Carolina. And I’m not even beginning to inch in on any of it.

But rather than go down that route, I’ll end this letter with this: My daughter and I are stronger than anyone could have ever imagined.  And while she may not have an earthly ‘father,’ I remind anyone who may read this, again, that she in fact is a child of our Heavenly Father – and that is far more amazing than any earthly father she could have potentially had.

Oh, and for those who cared to know – I’m including the paternity results (.pdf here) so that the truth is known and that I’m not the jezebel that Richard Eckstrom has tried to portray me as.