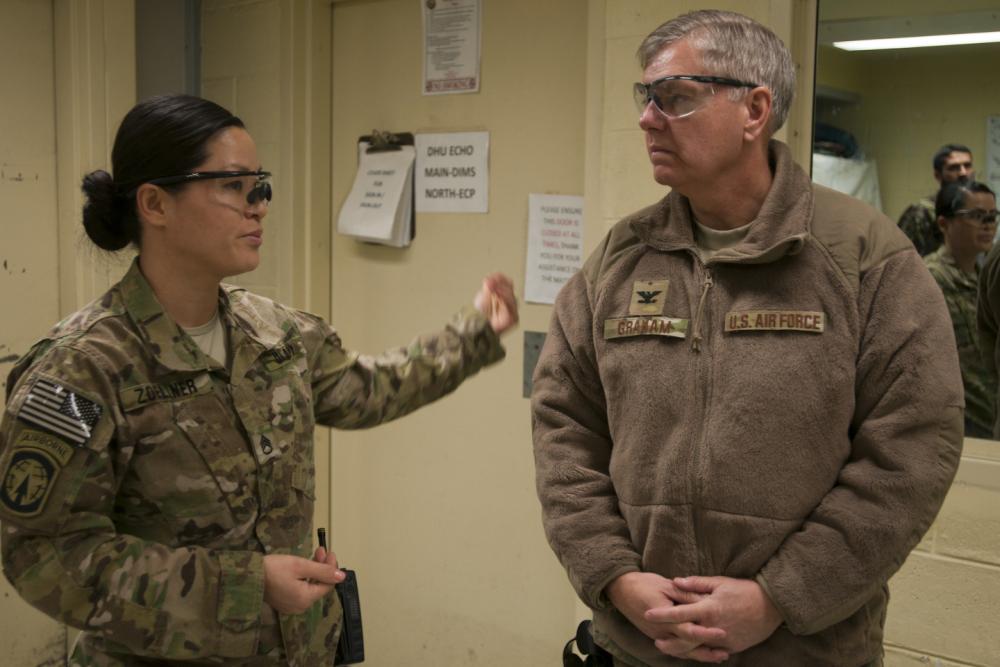 || By FITSNEWS || Other than the United States and Israel, it’s hard to find a country U.S. Senator Lindsey Graham doesn’t want to invade.

(You know, as long as he doesn’t have to do the fighting).

However it looks as though Saudi Arabia – our “partners in peace” – have made the list.

Graham – the biggest war hawk in Washington, D.C. – hasn’t read the classified section of the 9/11 report which is believed to implicate Saudi Arabia in the September 11 terrorist attacks.

According to the website 28 Pages – which is arguing for the declassification of the full 9/11 report – not only has Graham not read the secret section of the document, he “expressed hesitation about releasing the 28 pages for fear of causing ‘damage’ to Saudi Arabia.”

From the website’s report …

Since December 2013, Congressmen Walter Jones, Stephen Lynch and Thomas Massie have been urging legislators to read the 28-page chapter from a 2002 joint congressional intelligence inquiry. Jones says the 28 pages are “shocking,” and Lynch described them as critical to understanding “the web of intrigue…and the treacherous nature of the parties we are dealing with.” Massie said, “I had to stop every couple pages and try to rearrange my understanding of history.”

In light of those descriptions, Graham’s admitted failure to read the 28 pages could tarnish his foreign policy-dominated presidential campaign and make him vulnerable to being portrayed as neglectful of his duty to fully inform himself about America’s adversaries and their funding sources. (Senator Rand Paul has read the 28 pages and introduced Senate Bill 1471 to secure their release; it’s unknown if other members of the GOP candidate pool have read them.)

In late 2013, Paul Sperry published a story for The New York Post  detailing Saudi Arabian involvement in the 9/11 attacks.

Why isn’t our warmonger establishment chomping at the bit to go after the Saudis, then?

Easy: They’re still fueling our country – providing as much as 15 percent of oil imports.

“Saudi Arabia’s 260 billion barrels of oil, by far the planet’s largest single-country reserve, will be a bulwark of the global economy for decades to come,” a recent Foreign Policy  report concluded.

Nonetheless our position on this issue remains unambiguous.

“Every U.S. lawmaker should demand nothing less than a complete release of this report,” we wrote last July.

Graham can hang it up! john McCain should be retired by his constituents.
Well you may as well include the rest of Congress. They all need to go. They draw their exorbitant salaries and do nothing but waste time and our money!
These professional Politicians need to GO!
Term limits should be the order from now on.

The big news here is Grahamnasty can read. I thought McCain just drew him pictures. LOL

Graham and McCain. Who pitches and who catches?

I don’t think McCain can lift his arms above his shoulders from his beating in Hanoi.I assume he catches.

My guess is that Graham throws like a girl and Obama.Ever seen Obama throw out a first pitch?

Most of McCain’s injuries were from ejecting from his plane.
I always figured Graham for a catcher. That type of baseball doesn’t require you to lift your arms over your head unless they are doing the ‘Fifty Shades of Congress.”

Graham hasn’t got a chance to get elected President. He will draw enough votes in SC to make our primary almost irrelevant in determining the party nominee. The man, according to him, has never sent an email and he wants to be President? The republican Party needs to present us with a viable alternative to him in the next election cycle.

Mark Sanford is one of the BEST politicians ever and speaks the truth like Trump.Sanford is the ONLY one in SC that can defeat Graham.

Horse manure! Sanford is a feckless, responsibility shirking, lying adulterer! He is qualified to clean cow stalls, pig pens, destroy families, and maybe to be shark bait. That is about it.

And CAN”T be defeated. He is a fiscal and social conservative and not afraid to make his Christian faith a guide for policy.

Most important he is a masterful politician that obviously Trump has learned from. Sanford play hardball like the evil Democrat politicians.

Carpetbagger Sanford can’t be defeated outside of SC’s carpetbagger district SC1.
That is ALL we know.

Oh.What political office has he EVER been defeated?

None….BEFORE he fucked his way through South America.

Obama has FUCKED his way through America.Your point?

At least Obama knows how to keep his trouser snake confined.

God: Good enough to drive his policy, just not his marriage.

like he said “one of the BEST politicians ever”

I especially like how Mark Sanford was such a great husband and father, he made a big deal about that in his campaign for governor because he cares deeply for his wife and would never do anything to hurt her.

Because your OK with a frigid carp banging on your eardrums all day?

Mark Sanford is one of the BEST politicians ever

“Easy: They’re still fueling our country – providing as much as 15 percent of oil imports.”

‘They’ are us. Or, rather our oil corporations, which have been joined at the hip with Saudi/Gulf oil production/refining/sales since the ’30s.

Lindsey Graham’s refusal to read the 28 pages, his desire to willfully remain ignorant of all the available information, should not only disqualify him from the presidency, but from the US Senate.

Everyone knows Saudi Arabia is the US’s vassal state. We only push the whole “spreading democracy” thing when there’s a dictator we want to knock off and we certainly don’t want to undermine the dictatorship sending us cheap oil by declassifying the fact that the 9/11 terrorists were financially supported by those same dictators.

Plus, I have better things to do than read a report critical of Saudi Arabia, like having gay sex.

Lindsey Graham has no problem with the USA being invaded. She may *want* to invade damn near everywhere else on the planet…but she is actively abetting the invasion of the USA.

That’s why they call her “Grahamnesty”.

fisted that for you

Just curious…has FITSNEWS asked Sen. Tim Scott and the entire Congressional delegation if they have read the 28 pages?

Most of Congress is just there to collect a paycheck, they do as they are told by those who fund them so they can feel all important and make a six figure salary on the back of the taxpayer. Reading is hard.

Republicans especially discourage reading though as it may result in an education.

Aren’t the Saudis our “Partners in Peace” or some such non-sense?

“In a recorded exchange posted to YouTube by “Declassify the 28,” Graham also expressed hesitation about releasing the 28 pages for fear of causing “damage” to Saudi Arabia.”
He hasn’t read it, but is fearful of causing damage to Saudi Arabia…so what has he heard about it to make him feel that way?
I think Lindsey’s seen those 28 pages outside the normal channels and is just lying.

As I have read and understand it, it isn’t so much about oil to us as it is the continuance of the Petrodollar system. We have in our borders more than enough to be import free, if we wanted and weren’t afraid of pissing off Saudi Arabia while the Russians and Chinese are waiting in the wings. This is not my in typical area of knowledge though.

That fracking and WAY offshore oil we have costs more to “obtain” than the pressurized oil damn near gushing out of the middle eastern desert sands
The Saudis can sell it at almost $30/barrel and still make a profit while our breakeven is somewhere between 50 & 60 bucks/barrel. that why some of the fracking based “boomtowns” in the Dakotas and elsewhere are just about bust now.
We could possibly be “import free” (but the Canadians sell us a shitload) but it would cost more.
Plain and simple: Americans are not willing to pay the price to be energy independent (been preaching that since 1973).
Sparklecity: Veteran of the Yom Kippur War alert and participant of the subsequent kick-ass recession of 1974-1975 (LARGELY a result of the Arab Oil Embargo during the Yom Kippur War). And a no-shit life changing event for ol’ “Sparkle”

The Department of Energy was created to decrease our dependance on foreign oil. How many hundreds of thousands of employees are in the DOE? How many “outstanding” and “highly satisfactory” performance ratings do they receive? Just curious.

Whoa dude! Most federal agencies don’t generally have “hundreds of thousands of employees!” Only the top five or six departments (not individual agencies) even break 100,000 (although DoD and VA are huge). The “big three” after that are Justice, Treasury, and Homeland Security, but the aren’t “hundreds of thousands” either. DOE probably has fewer than 15,000 employees…although if your point was to say that they suck, you are correct.

All right. I’ll admit. It was me. It was all me. I had a secret contract with the Saudi’s to direct the planes into the World Trade Center buildings by remote control. It was all me. They offered me a deal I couldn’t refuse. I got 4 Iranian women escorts and three Saudi chicks. And they promised me $195 in cash and some gold and free gasoline for life. I just had to take them up on it…….what? He didn’t read it? Never mind.

Are you sure about that? I haven’t found anything stating that Rand has read the 28 Pages. He might have, but if you don’t have specific source to quote, you might be wiser to revise your piece. For example, in Rand’s S. 1471 press conference, June 2nd, he did not specify as to whether he has read it or not. Just a friendly FYI.

All right. I’ll admit. I have no rhythm. I am ridiculous and obnoxious. And I lust for Obama.

“…as long as he doesn’t have to do the fighting.”

True enough, but he’s lucky he’s an attorney. The Air Force does things backwards (at least in respect to the other branches)…the enlisted guys send their officers
off into harm’s way.

Ummmmm…Kemosabe…does Will Folks STILL not know that the
all-day suckers who keep re-electing Grahamnesty embrace Saudi oil and closet
gays too?

Why no he doesn’t, Tonto, and just so ya know—God’s Word
does NOT return unto Him void and already has a reward for Will, Grahamnesty
and them—who knew !!!

None of this matters as long as the Republican Party in South Carolina has an open primary.