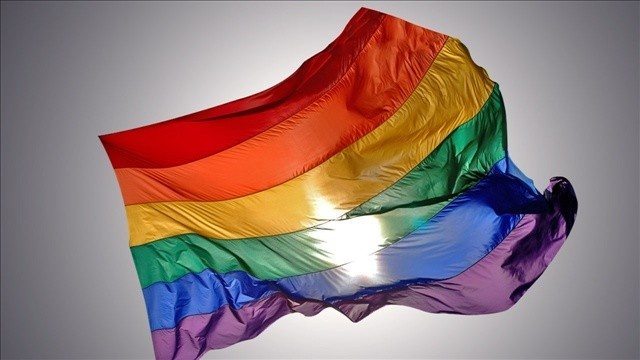 || By FITSNEWS ||  In case you’re just now noticing, things are all sorts of crazy in South Carolina.

“Too small for a Republic, too large to be an insane asylum,” anti-secessionist James L. Petigru remarked in 1860.

What was true then is true now …

Last week, we brought our readers an item about PTR Industries –  a government-subsidized Horry County, S.C. gun manufacturer which is having some trouble paying its bills.  Part of that company’s unfortunate crony capitalist history?  The March suicide of one of its employees, Horry County councilman Bob Grabowski.

Why should you care about this race?  You shouldn’t.  In fact the people who live in this district don’t even care, as evidenced by the 7 percent of registered voters who bothered to cast a ballot two weeks ago in the GOP primary election.

Endeavoring to make them care?  A group called the “LGBT Association of Horry County.”  In fact the group has bombarded the district with a mail piece endorsing Crawford, praising him for his support of same sex marriage and his plan to “sponsor an ordinance that will provide tax breaks to same sex couples.

Take a look at the mailing’s front … 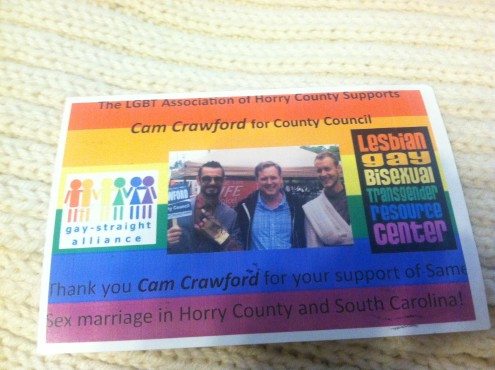 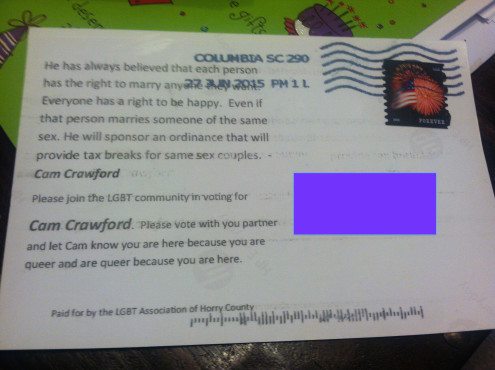 Couple things: First and most importantly, there is no such thing as the “LGBT Association of Horry County.”  No such group exists.  Furthermore, Crawford has not articulated a position on the issue of same-sex marriage – and has never stated his support for an ordinance providing tax breaks to same sex couples.  Finally, the picture used in the mailing – taken from Crawford’s Facebook page – is not from a pro-gay event.

Everything about the mailing is a fabrication, in other words.

So where did it come from?

Crawford supporters are accusing Hanna’s consultant – Jay Specter – of slinging mud.  Hanna’s supporters counter that the whole thing is a set-up – engineered to portray their candidate as a villain.

The newsworthiness of the story from our perspective is that same-sex marriage is apparently being used as a voter suppression method – a means of discouraging people from voting for one of the two candidates in this race.  Which is sad.

We’ve said it before and we’ll say it again: No government – federal, state or local – has any business banning or sanctioning marriage (gay, straight or plural).  Marriage ought to be the exclusive purview of individual congregations.  As for civil unions, however, government has an affirmative obligation to recognize these equally per the fourteenth amendment.

In other words get government out of the marriage business … and recognize everyone’s choice of partners equally from a tax and beneficiary perspective.

Seriously … how does such a simple solution evade politicians at all levels of government (and on both sides of the increasingly indistinguishable aisle)?