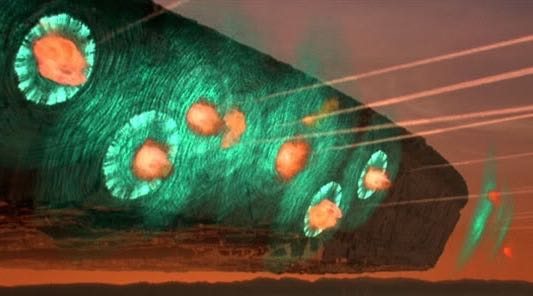 || By FITSNEWS || This website has been mercilessly critical of crony capitalist kingpin Boeing – and with good reason.  The company which leeches off of American taxpayers while awarding eight-figure salaries to its top executives.

Well now the company has something in common with the aliens from the movie Independence Day (another set of leeches).

What’s that, you ask?  Force fields …

According to the U.S. Patent Office, Boeing has recently been granted a patent for a “method and system for shockwave attenuation via electromagnetic arc.”

While some of you (including our founding editor) pretend to know what that means, allow us to explain: Boeing is putting its proprietary seal on a technology which would use lasers, electricity and microwaves to ionize certain regions near targeted objects in order to create plasma shields capable of deflecting seismic impacts.

“Such embodiments … may reduce the energy density of the shockwave by creating a second medium in the path of the advancing shockwave that reflects, refracts, absorbs and deflects at least a portion of the shockwave,” the patent read.

News of the patent was first reported by c|net, which described the force field envisioned by Boeing as being “unsuitable for enveloping a target and being held in place for any length of time.”

“That kind of force field is technically feasible — physics students last year determined that an electromagnetic field could by used to hold a plasma shield in place — but it would likely also deflect light, leaving anyone inside blind as a bat,” the website reported.

So … can Boeing’s force fields stop a union?  Or a hypercritical blogger?  Or a lithium ion battery fire?

SC Union Battle Is On!