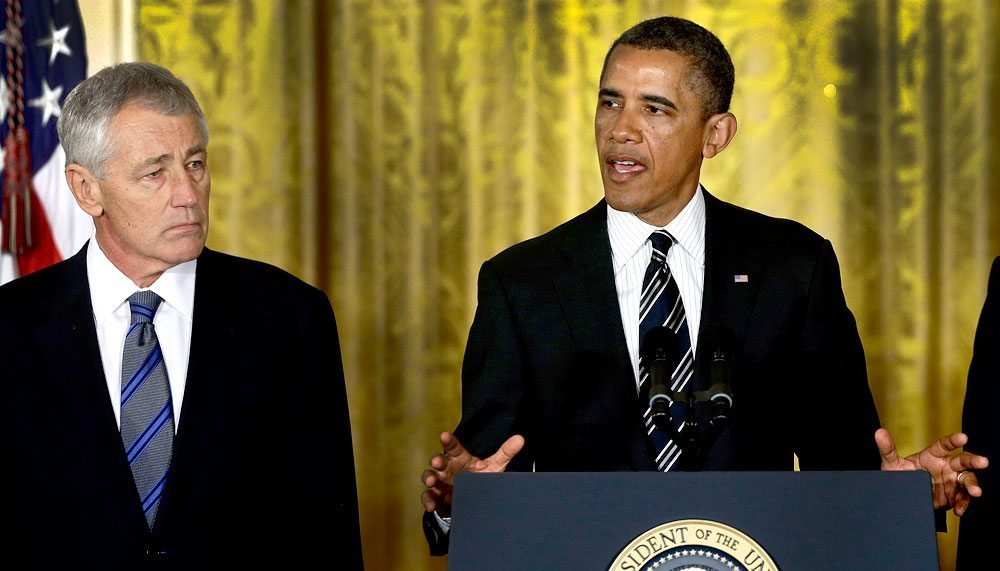 BARACK OBAMA’S SECRETARY OF DEFENSE GETS THE BOOT

By FITSNEWS || Chuck Hagel – the only “Republican” in U.S. president Barack Obama‘s cabinet – is resigning his post as Secretary of Defense under pressure.

Evidently his fearmongering wasn’t up to snuff …

A former two-term U.S. Senator from Nebraska, Hagel and Obama bonded over their shared opposition to the 2003-11 Iraq War – which the president once referred to as a “dumb war.”  Less than three years after the end of that conflict, though, Obama has reengaged America’s military in Iraq – arguing such intervention is necessary to contain the Islamic State of Iraq and Syria (ISIS).

Really?  Good luck with that …

Hagel – who took over the Pentagon last February – lasted less than two years as Obama’s Defense Secretary.  He was nominated by Obama in January, but became the first Defense Secretary ever to have his nomination successfully filibustered.

The reason?  Warmongering U.S. Senators John McCain and Lindsey Graham didn’t feel he was sufficiently hawkish.  In fact McCain and Graham went to great pains to paint Hagel as anti-Semitic because he failed to consistently offer a full-throated defense of the ongoing U.S. subsidization of Israel’s war machine.

Eventually, Hagel was confirmed … but he’s never been seen as a loyal “neoconservative” (a.k.a. warmonger).

In fact ever since his bruising confirmation fight he’s played second fiddle to General Martin Dempsey – chairman of Obama’s joint chiefs of staff and a proponent of sending U.S. ground troops back to Iraq.

According to The New York Times, Hagel was booted due to Obama’s “recognition that the threat from the Islamic State would require a different kind of skills than those that (Hagel) was brought on to employ.”

“The next couple of years will demand a different kind of focus,” an Obama official told the paper.

Translation?  The “thirty year war” with ISIS is on for real now …

This website is no fan of Hagel’s.  Like another former U.S. Senator, he became a warmonger when it suited his purposes – but it wasn’t enough.   And now Obama is burnishing his own warmongering credentials by showing Hagel the door.

Lost in the personnel change?  The abject failure of costly American interventionism abroad.  After spending fourteen years and $6 trillion on the first so-called “War on Terror”  (to say nothing of the human cost in lives, injuries, post-traumatic stress, etc.) – America is less safe, less free and less prosperous.

SNL Gets It Right …