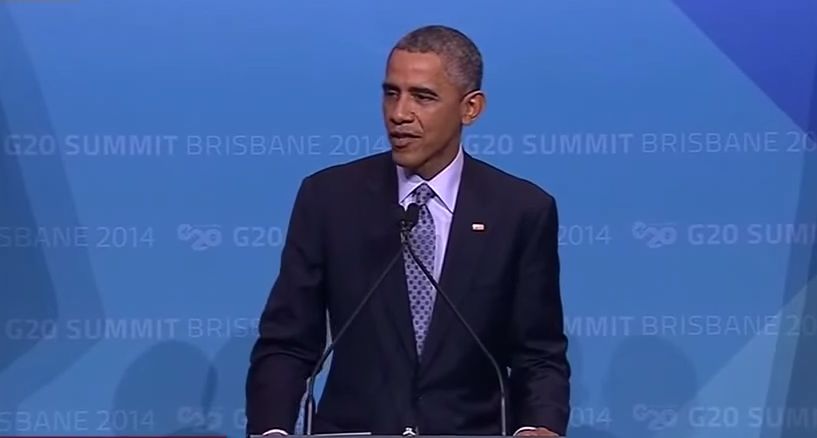 FROM “ONE OF THE BRIGHTEST MINDS” IN AMERICA TO “SOME ADVISOR”

By FITSNEWS || With the mainstream media having failed to “quarantine” the scandal surrounding Obamacare architect Jonathan Gruber, U.S. President Barack Obama was forced to address the issue during a trip to Australia.

Gruber, of course, is a liberal economist who received hundreds of thousands of dollars from the Obama administration to draft key provisions of the administration’s socialized medicine law.  Gruber has since admitted manipulating Obamacare’s numbers in an effort to have it scored a certain way by the Congressional Budget Office (CBO).

“Lack of transparency is a huge political advantage,” Gruber said of his efforts.  “Call it the stupidity of the American voter or whatever but basically that was really, really critical to getting the thing to pass.”

Obama – who shared several high level meetings with Gruber over Obamcare strategy – did his best to distances himself from the controversial remarks this week.

Pointedly questioned about whether he misled Americans about the law’s most basic financial assumptions (and whether Americans could really keep their health care plans if they liked them), Obama issued a blanket denial.

He then began paddling away from Gruber as fast and as furiously as he possibly could.

“The fact that some adviser who never worked on our staff expressed an opinion that I completely disagree with in terms of the voters, is no reflection on the actual process that was run,” Obama said.

Never mind that Obama, according to Gruber, participated in the effort to pass the law by hook and crook.

“The problem is it’s a political nightmare, and people say ‘no, you can’t tax my benefits’… so what we did a lot in that room was think a lot about well how could we make this work?” Gruber said of his discussions with Obama about the law.  “And Obama’s like – well, you know – he’s really a realistic guy.  He was like, ‘look, I can’t just do this.’  He said ‘it’s just not going to happen politically.  The bill will not pass.  How do we manage to get there through phase-ins and other things?’  And we talked about it.  He was just very interested in that topic.”

And never mind that in 2006 then-Senator Obama appeared at the liberal Brookings Institution (where Gruber used to work) – referring to him as “one of the brightest minds from academia and policy circles” and someone “I have stolen ideas from liberally.”

So the cover-up begins …

A socialized medicine architect Obama himself referred to as “one of the greatest minds” in liberal America – who got paid hundreds of thousands of tax dollars to sell a pack of lies to the American people – is now just “some advisor.”