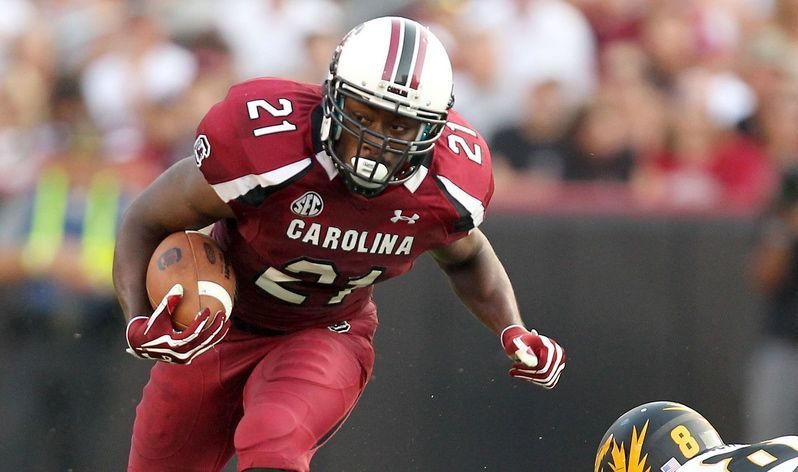 By FITSNEWS || Just when you thought it couldn’t get any worse for University of South Carolina football fans this season, news out of San Francisco indicates former Gamecock great Marcus Lattimore has decided to retire from the National Football League … without taking a snap.

Lattimore’s agent – Michael Perrett – is disputing the claim, though.

“Info being reported is not accurate,” Lattimore’s agent told ESPN. “Marcus Lattimore has made no decision on his future.”

According to Ian Rapoport of NFL.com, the 23-year-old will meet with doctors this week to discuss his options.

After being chosen by the San Francisco 49ers in the fourth round of the 2013 NFL draft, Lattimore spent the entire 2013 season on the physically unable to perform list as he continued to recover from a devastating knee injury suffered in October 2012.  Lattimore underwent a successful surgical procedure in the aftermath of his horrendous injury to repair several damaged ligaments in his knee.  Previously, Lattimore suffered a season-ending injury to his left knee in 2011 that also required surgery.

And while initial reports were that the 6-foot-0, 221-pound tailback was ahead of schedule in recovering from his second knee injury, he didn’t begin practicing with the 49ers until last week.

According to reporter Matt Miacco of Comcast SportsNet, Lattimore experienced soreness in his surgically repaired right knee during his first full-speed workouts last Wednesday and Thursday.

No structural damage has been reported in either of Lattimore’s knees since he resumed workouts.

In 28 games at USC, Lattimore rushed for 2,677 yards and scored a school-record 41 touchdowns. He also inspired teammates and fans alike with his selflessness on and off the field.  Among the highlights of Lattimore’s career?  His smashing arrival against Georgia in 2010 or his record-breaking romp over Florida in ‘The Swamp” that same year – in which he amassed 212 yards and three touchdowns en route to South Carolina’s first-ever win in Gainesville (and first-ever SEC Eastern Division championship).

Prior to coming to South Carolina, Lattimore ran for 6,375 yards and scored 104 touchdowns during his career at Byrnes High School in Duncan, S.C.

While plenty of people have viewed the clip of the gruesome injury that now appears to have ended his playing career, we choose to remember Lattimore’s final touchdown run as a Gamecock – a play which occurred just before he sustained the fateful injury. 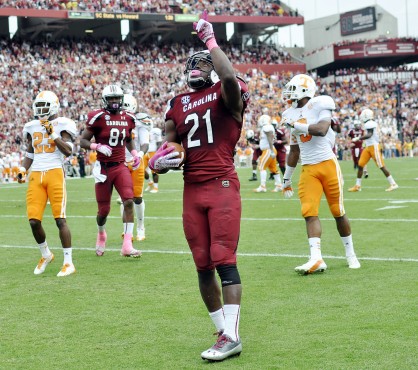 Steve Spurrier: How Much Room To Talk?

The kid will be successful at whatever he decides to do next. Coaching perhaps?

The kid will be successful at whatever he decides to do next. Coaching perhaps?

He’ll be admitted to the Jadeveon Clowney hall of fame as it’s first inductee, with JC just behind him.

He’ll be admitted to the Jadeveon Clowney hall of fame as it’s first inductee, with JC just behind him.

Haha. It’s funny as shit when someone’s career ends, especially if they play for a rival school. That’s funny shit right there.
–you.

There are some butthurt cocks up in here today.

I wonder why that is?

Awwww, did da wittle joke hurt your feelings? Would baby like his bottle?

The only sad thing I’ve read is the grown men who are literally crying over this announcement. Life is full of challenges and setbacks, these guys need to grow a pair and fucking man up… maybe go to the doctor and get a testosterone shot. When I was a kid I wanted to be an astronaut, that didn’t work out, people who knew me didn’t burst out in alligator tears.

Sorta like living in Orlando in 1995 while attending art school. Grown men walking around crying about the death of bloated musician, Jerry Garcia. Plug your mangina and go on about your day.

No one is crying, that’s a lie…just making up more of your orange bullshit. And astronaut? Hah. Didn’t momma dun tell y’all that they put monkeys up in space, but not dumb ass rednecks?

No one is crying, that’s a lie…just making up more of your orange bullshit. And astronaut? Hah. Didn’t momma dun tell y’all that they put monkeys up in space, but not dumb ass rednecks?

You obviously haven’t been reading any of the forums today. You’d swear Cocky died the way some of these guys are talking.

Actually the primary color of my school is green, not orange. We didn’t have rednecks in our state, the dirt isn’t red.

Upvoting your own posts?
What’s more sad? People crying (which I’m sure is quite an overstatement) about Marcus’s career-ending injury, or you on here beating your chest with excitement that it actually happened?

Everybody else does it so why not me?

Who’s beating his chest? Lattimore was actually one of the non-thug players on the team. I’m just living in reality and stating that it’s a little bit of a stretch to consider him a retired NFL player when all he did was use their rehab facility and participated in a total of TWO actual team practices over two seasons. Please correct me if I’m wrong.

Fans here act like he’s the second coming of Christ and suggesting USC hire him as a running back coach… when in fact he dropped out of school, has no coaching experience and suddenly he’s qualified to be an SEC Division I position coach.

…when in fact he dropped out of school, has no coaching experience and suddenly he’s qualified to be an SEC Division I position coach.

Hate to hear this. This Clemson fan is wishing Marcus lots of luck.

I don’t think that “retire” is the appropriate word to use here….

Reminds me of Chris Rock talking about Tupac getting “assassinated”.

He was on the team receiving money for his services. I’m not sure what other word you’d use.

So now he’s a “retired NFL player” who’s stats are all zeros from Games Played to Average Yards per Carry. His stats are the as those who work in the training room.

For this comment, and the one on his degree (like you give a crap about any of your Clemson players after they leave school): he signed an NFL contract. He has probably already made more money than you have seen in your life (you can suck on those zeros). He will continue to earn, coach, and be a role model for kids. All horrible things for a despicable human being like you to understand. Marcus will be fine. Sorry he didn’t choose Clemson…that is not reason to wish him ill.

I think they said the same thing about fat-ass Clemson’s William “The Refrigerator” Perry. Now he’s damn near homeless.

Strange that you seem to believe that performing certain tasks that are one aspect of a job means you’re able to retire from it. Kind of like how when a janitor is retiring from working at a company, I immediately demand to know how many floors he’s mopped. If that answer is 0 I shout “YOU CAN’T RETIRE, YOU DIDN’T EVEN MOP FLOORS LOLOLOLOL”

How do you retire from a job that you’ve only had two years? I worked construction while in high school and college, am I now a retired carpenter? Where is the line drawn between “retire” and “quit”? He’s not even vested in the NFL retirement system.

I don’t mean to sound ugly, but what exactly has Lattimore done for the 49’ers besides use their facilities for rehab? Up until today, from a financial standpoint, he’s been a liability to the organization.

Again, where does it say that to retire from something, you have to be a financial positive for a company? That’s why, whenever a janitor retires from a company, after mocking him for not mopping floors I demand to know HOW MUCH MONEY DID YOU MAKE ACME CO??????????? 0? LOLOLOLOL YOU CAN’T RETIRE, WASHING THE WINDOWS LOSES THE COMPANY MONEY!!!!!!

How does one retire from a job they never did?

I’m now announcing I’m retiring from being king of the world!

Mind if I take your spot?

I already have it and have had it, E Norma Scok.

Mind if I take your spot?

(Doesn’t understand what having a job means)

What job has he had? I’ve never seen him play pro football, have you?

And what’s up with your answers always in parentheses? Is that the cool thing these days?

I mean, are you really this stupid? You’re a tater, so the answer to that question is (yes). You’re just butthurt he didn’t go to Clemson and you and the other half-wits like to shit on anybody who doesn’t play on your team (including those who are excellent role models). He signed (a 4-year contract) with the 49ers. He was an employee of the (49ers). He was an NFL player (and he has) now retired. Got (it) now, ape?

Someone’s grumpy, did you have a bad weekend? The 49’ers employee who cleans out the training room ice machine has done more for the team.

Is he a retired NFL player, or an NFL player who has quit for medical reasons?

Greg Reid retired him a couple of years ago.

Lattimore was a great college back. He is a victim of the ‘ole ball coach’ running the shit out of him in the most physical college football conference in the country. He took a beating with his running style-a bruising,physical type of runner.

Jim Tressel did the same thing to Maurice Clarett at THE Ohiio State University.

Maybe they should have studied harder and worked to get a real degree so they’d have something to fall back on after their football career was over.

I would agree with you on this. I kept wondering when he would get hurt since he was Spurrier’s workhorse. I can understand why Clowney did not push himself at SC. He did not want the same thing to happen to him. Most of these guys have this once chance to make killer money. Not just for themselves but their families. Spurrier could careless about them after they leave. He just needs them to win for him. At any cost. I hate to hear about this for Lattimore. But you know what? He will land on his feet and will do well at whatever comes his way.

This shows quite a bit of ignorance. Lattimore’s knee did not give out due to an accumulation of wear and tear; it gave out because the UT defender dove at his legs causing Marcus to fall awkwardly and practically break his leg in half. He would have been injured the same way on the play regardless of whether he had carried the football 10 times or 1000 times in his career.

Was that the last time the Shamecocks beat Tennessee?

What an odd statistics to bring up..when noone mentioned it. Just to add to that…when was the last time the cocks beat Auburn?

Wait..with that few people in the standing at the end of the game, its hard to get a “chant” going, huh?

another person collecting a disability check he did not deserve

Who forced him to play football? Why didn’t he play baseball or run track?