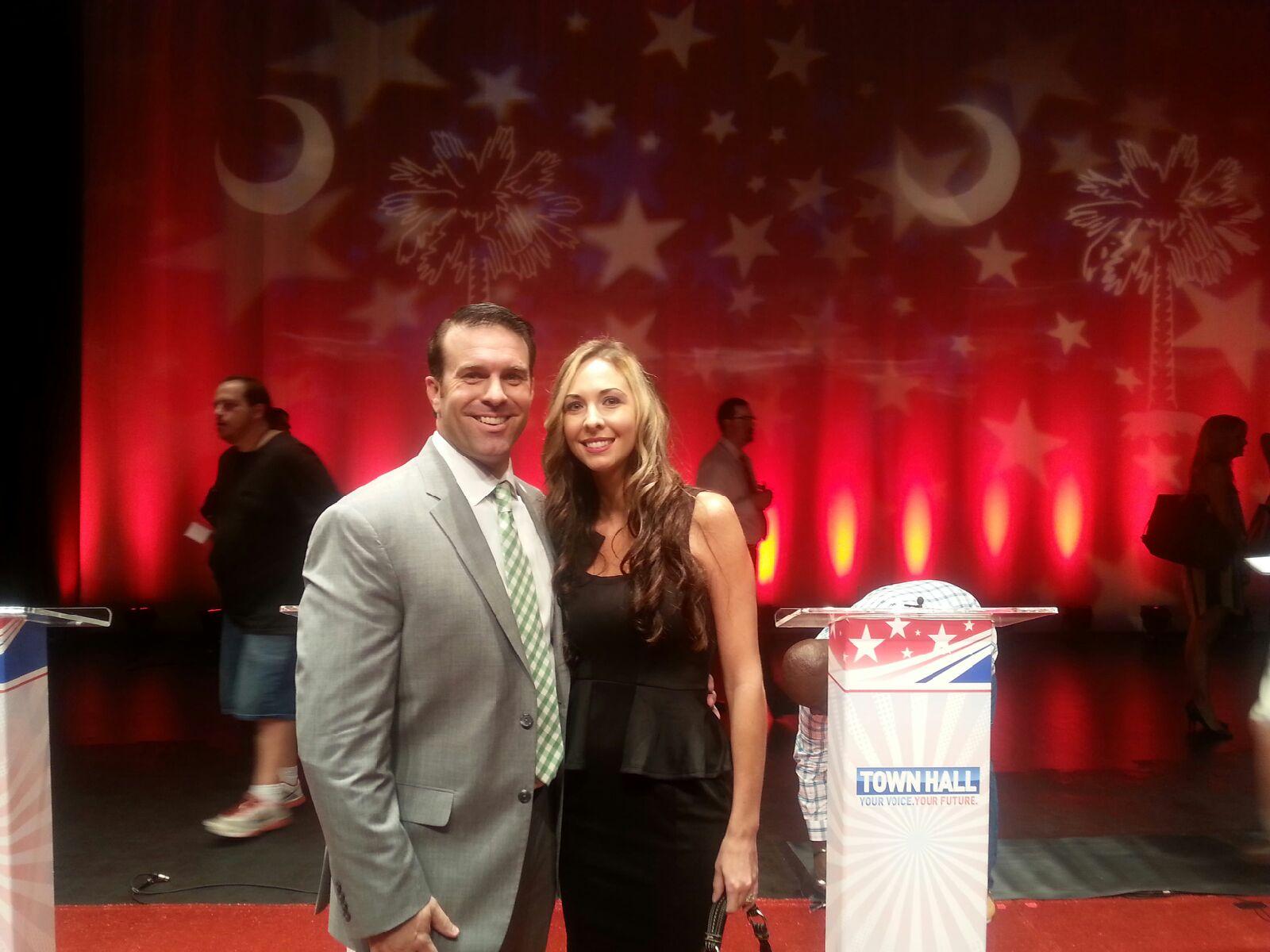 In fact the Lowcountry, S.C. businessman – who is polling in the single digits – barely got a mention from the Palmetto State’s legacy media after participating in a five-way debate this week with incumbent “Republican” Nikki Haley, Democrat Vincent Sheheen, petition candidate Tom Ervin and United Citizens’ candidate Morgan Reeves.

The “lamestream” press doesn’t want you to know about French.  They want the race to be all about Haley vs. Sheheen … a.k.a. Big vs. Bigger Government.

Anyway … whatever you think of the various candidates for governor, it’s pretty clear who won this week’s debate.

That would be the guy leaving the building with Beth French.

Hell, at least they didn’t frame him out of the wide shot like they did Ron Paul in
the 2012 Southern Republican Presidential Debate.

I like Morgan Reeves and that bright pinstripe suit he was wearing. I think you could see him from space wearing that thing.

All he needed was a purple fedora with a peacock feather in it.

He even says AXE instead of ASK, amazing! INVEST IN HEMP MILK, INSTEAD OF 401K, outstanding!

Bless you, bless your family, bless this building, bless the camareamen…hey..did you know I played college football?

“…STEVE FRENCH WON THE GUBERNATORIAL DEBATE…” and not a word in The State or any of the other papers that he was even there.

That was the stangest, most inappropriate thing I’ve heard lately. My first thought after I heard that is “well I’ve never paid for sex (outright). Should I be bragging about having sex then?”

It was just an odd, misplaced thing to say.

He isn’t electable anyway. He doesn’t fully understand that a comment like that alienates him for a significant % of SC’s population…even if he doesn’t mean to offend.

The fact he has the “libertarian” label attached to him just reinforces the mistaken notion that it’s all about the “sex, drugs & rock-n-roll” when it comes to libertarianism.

Hold on, we get sex, drugs & rock-n-roll if we’re libertarians?

Yes! And you don’t have to file any reports, after … Unless you had sex with a g’ment employee and didn’t pay enough for the dues.

Frenchs antics should remind us that despite Fits obsession with it, most people don’t take libertarianism seriously.

It remains a fringe philosophy and the Libertarian Party basicalky exists to give a few pissed off Republicans and others who like to smoke dope a place to vent occassionally.

What a monumentally stupid thing to say in a debate. Reason #14 he’s just not a serious candidate. FITS will never understand this. Election aren’t about unicorns and rainbows; they’re about getting, well, elected. From a candidate’s perspective, if you don’t get elected, you implement precisely 0% of your ideas.

… One thing accomplished is a libertarian can make a “progressive” look like a totally incompetent fool. … That’s usually well worth the effort.

Maybe so, but it gets nothing done. Haley will be governor, and French will consider it a victory if he can get quoted in the sale paper at a Piggly Wiggly a few months from now. If you are serious about getting elected, you have to limit the amount of dumb that falls out of your mouth.

What a dumb-ass. Way to obscure your point.

Yep. Anyone should know that him and his wife are too good looking for politics anyway.

The beginning was pretty funny:

It was a clown show.

Best thing to come out of this event was NIKKI now on record defending the Confederate flag.

Whatever national “aspirations” she had ended last night.

French hates people who work for a living. The idea of a mere employee being able to negotiate for the best wage offends him.

It’s the way the Koch’s would prefer it.

And remember, Mace is in 2nd place!

Second place my ass, her momentum is continuing to build. She’ll win the thing outright. Uh, wait a minute.

Wow! There was a debate??

Attention: Haley Staffers
Before the next debate – find out the color of the background curtains. Realtors stage houses for a reason. Red on red. Not good.
Take a tissue and wipe that smirk off of her face. No one wants to see a grown woman smirk like a middle schooler. Plus, the Mean Girl impersonation doesn’t go well with her anti-bullying commercial.

Personally I liked the black dude. Best quote of the night….”I played in the Pro Bowl, give me the ball and I’ll get you some yardage”…

Ours is a two party system. Fix the party of your choice or not. Third party/independents are non factors without any realistic chance to gain constitutional authority.