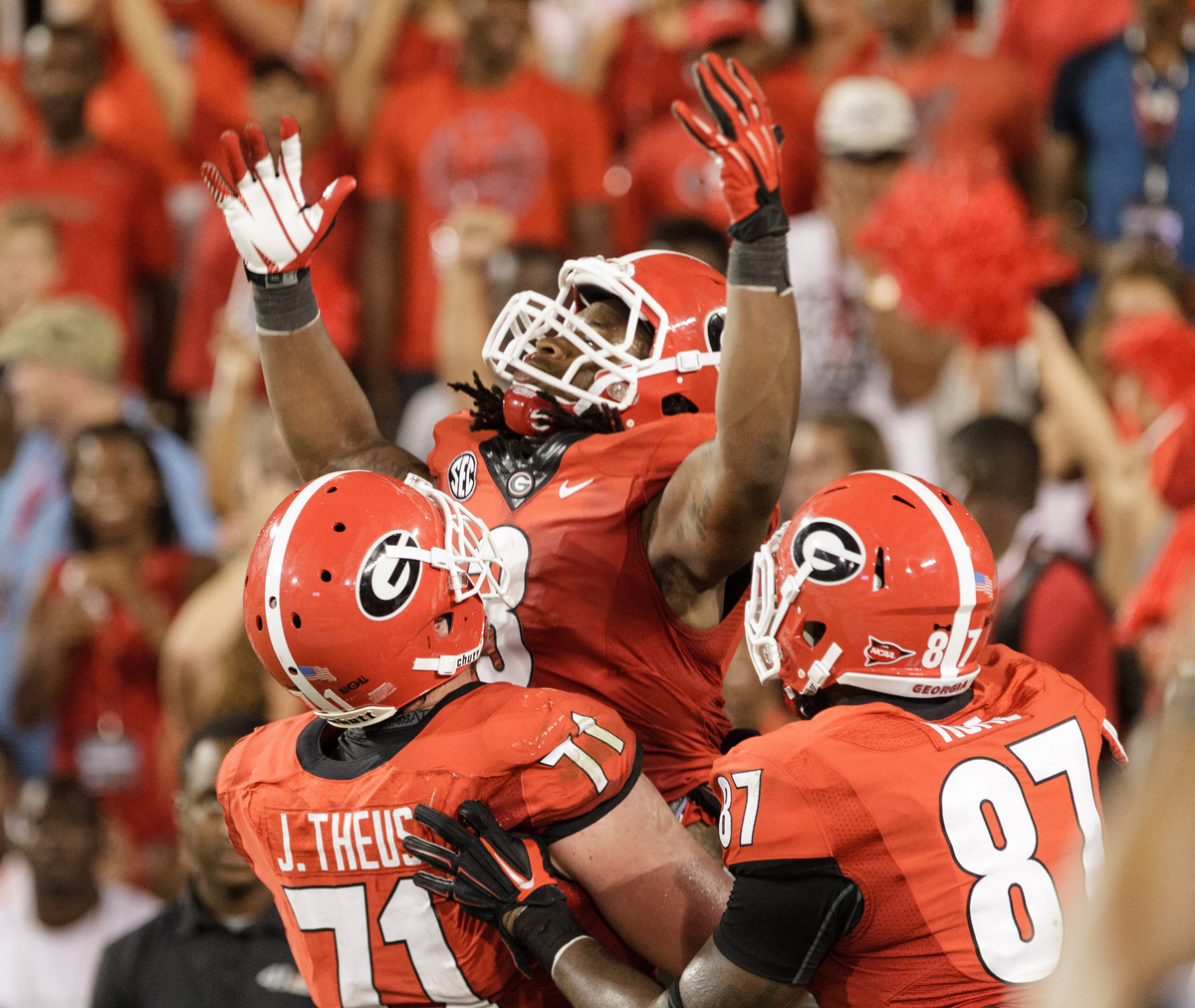 By FITSNEWS || University of Georgia running back Todd Gurley – the frontrunner for the 2014 Heisman Trophy award – has been suspended indefinitely pending an investigation into an alleged violation of NCAA rules.

No further details were provided by the University, although reports quickly surfaced alleging Gurley received cash in exchange for signing memorabilia.

According to SI.com, an individual claims to have paid Gurley $400 to sign eighty items last spring.

Gurley has rushed for an SEC-leading 773 yards and eight touchdowns through five games so far this season. He shredded the Clemson defense in Georgia’s season-opener for 198 yards and three touchdowns – and ran for another 131 yards the following week against South Carolina.

Two weeks ago, Gurley ran for a career-high 208 yards and two touchdowns against Tennessee.

Over his three-year career in Athens, he’s rushed for more than 3,100 yards and 35 touchdowns.

No. 13 Georgia plays No. 23 Missouri on the road this weekend in a pivotal mid-season SEC East matchup.

could not wait until the big money came, had to have some now for signatures!

Just waiting for the posters that think the players should be paid.

It use to be that when a player was drafted into the NFL they took a pay cut.

When you play football for a school and if you’re good enough you get a scholarship, that’s not a job but you are being compensated.

The school houses, feeds, trains, and educates you. That is the definition of PAYMENT.

The players should be paid.

And they should be compensated by the performance of the entire team. Hence, our Gamecock boys would be suffering the effects of a big cut in pay about now.

I have no problem with that, as long as the players then have to pay their own way. If they’re from out-of-state the players can pay out-of-state tuition, room & board, books, tutors, clothing, etc… And they also have to qualify academically just like ever other student, no exceptions.

If they are that good, let them go to the NFL without college. I know why they don’t.
Colleges need them for the money they rake in. They can’t let them stay in high school, they start scaring the younger children.
There should be no “special classes or curriculum ” for these types of student athletes. They either make it, or not. Now that would change the face of college football.

Correct.It’s a modern-day form of slavery.

Yeah, because athletes at universities are so mistreated. If they don’t like it they can leave on their own free will.

Then we’d just be left with a bunch of white guys and (what the black community likes to call) Uncle Tom types.

So we’d end up with actual student-athletes?

He got $400 for sigs. He may be back, but not for a couple of games and does UGA forfeit any games?

Mark Richt usually does not play, he kicked Crowell off the team. Different standards are different schools

Maybe he’ll pull out the Spurrier Book of Coaching and give his star player 6-7 chances before kicking him off the team.

Or the Dabo book with Sammy, don’t throw stones in glass houses!

I’ll throw all the stones I want, because you like dirtpecker fans automatically think because I say something negative against the dirtpecker program that I’m a tater fan.

Your assumptions are wrong. I am just saying it happens in all these big time programs. All these players are told what not to do when they get on campus, the rule needs to be break the rule and you are gone. Big time player or bench warmer, break the rule-you are out! You did say something about the poor old dirtpeckers without mentioning the tater issues, if you are not bias mention that both have problems. He who is without sin cast the 1st stone!

I’m not a fan of either school, but I do find tater fans more tolerable than dirtpecker fans. I don’t know what it is but dirtpecker fans have this superiority complex about rooting for a shitty school. Outside of the horseshoe the campus might as well be in downtown Detroit.

Squishy really is a Clemons fan. He claims he isn’t over and over but if he isn’t he has no life seeing how much he posts on here. Either way he can say hello tonight in his prayers to his in the dirt pecker lover momma of his for me.

Yet the number 3 Georgia Jersey is still for sale at the UGA book store. Sounds about right

Apparently negotiation is not his strong suit.

How much do you get to sign your name 80 times? I’d be surprised if his autograph is even worth $5.00 at this time.

Every student athlete (or the team that signs him) that signs with the pros prior to graduation should be required to pay back the full cost of the scholarship he received with interest and a fee for training.

Pay back who? The booster club pays for the scholarship. The University only rakes in cash, and gets the upside from all the football exposure.

UGA will miss Gurley but they also have an army of great running backs.

I guess the only person who can stop Todd Gurley is Todd Gurley. I will for the life of me never understand why the NCAA and the colleges could not look past their short term greed on paying players. There are plenty of academic scholarships that pay stipends. So it was a false choice between “student-athlete” and “semi-professional athlete.”

Idiot Fits! UGA is investigating not the NCAA. Yet another fine piece of Fits journalism.

Idiot! UGA suspended him because the NCAA is investigating it. . Are you really that fucking dumb you don’t know the difference? I guess your ACC is the best high and might ass went to UNC on those no show classes they offer up there?

“a source told ESPN’s Joe Schad that the NCAA investigation centers around whether Gurley was given money for autographs, memorabilia or the use of his likeness”

I repeat “the NCAA investigation”
Get a fucking clue idiot

Yeah, it’s probably more in the $2000 range, not that it really makes a difference.

Also, Mark Richt’s quote should be “I’m obviously very disappointed in the NCAA for continuing to have such archaic and moronic rules. It is beyond stupid that only the NCAA and its institutions can profit off of players’ names and likenesses.”

If Gurley gets suspended for the season he should be allowed to play in the NFL immediately. I think the Chargers would start him on Sunday.

He should have raped somebody “allegedly” nobody would even bother to investigate, he could get a he is an OE whatever and be on his ways to the pros. Sheesh, these guys need to learn what is and isn’t acceptable.

Or thrown a girl down a flight of stairs