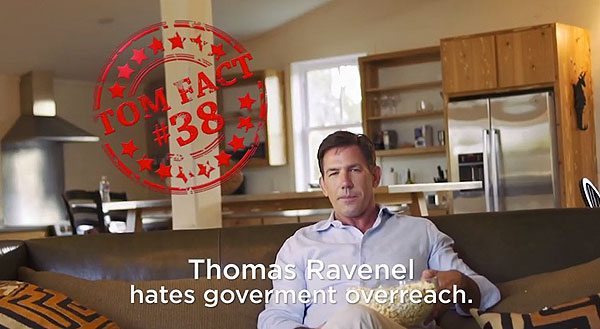 The ad features Ravenel sitting on a sofa eating popcorn while an actor portraying Uncle Sam attempts to creep behind him and steal a few bites.

Without speaking, Ravenel pops “Uncle Sam” on the hand – at which point white letters appear at the bottom of the screen informing us that “Thomas Ravenel hates goverment overreach.”

That’s right … “goverment.”  Which is a lot like “government,” but minus a letter (somebody cue South Carolina native Vanna White).

“We’d expect the ad’s big Hollywood director … to be a stickler for the details,” the City Paper  observed.

Sudler-Smith’s ad is marginally clever … but if you’re going to rail against government, you might wanna be able to spell the word you’re railing against correctly.  Even if you’re running for office in alphabet-challenged South Carolina.

Anyway, the ad was quickly yanked from the web after The City Paper  published its report … which is too bad.  A candidate with a quicker wit might have laughed off the mistake – joking that they had already cut government by ten percent.