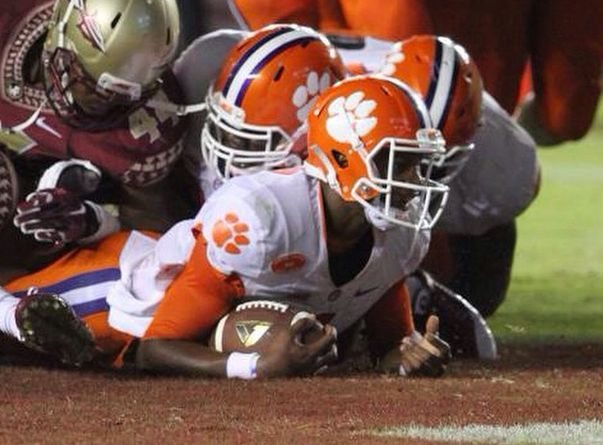 Clemson, S.C.—Clemson quarterback Deshaun Watson has been named the ACC Rookie of the Week. This past Saturday evening Watson came off the bench and completed 19-28 passes for 266 yards in a 23-17 overtime loss at number-one ranked Florida State.

Watson also rushed 12 times for 30 yards and scored a touchdown. His 296 yards of total offense were a record for a Clemson true freshman quarterback and his 266 passing yards were the second most.

Watson is the first Clemson quarterback to win ACC Rookie of the Week honors since Kyle Parker in 2009 for his performance in an overtime win against an eighth ranked Miami (FL) team. Parker is now a member of the Colorado Rockies.

Eggs Up Grill Has Arrived in Columbia

Will The Real Jadeveon Clowney Please Stand Up?

Clemson Is The “New Alabama?”

Solid play from Watson against FSU. Unfortunately, the talk must once again focus on the future, as the present season has already been a let down. Three expensive coaches and a record no better than what three inexpensive coaches could claim.

How does the total coaching payroll at Clemson compare with those at other Division 1 schools. Oh, you didn’t check. What a surprise.

Two of the three highest paid assistant coaches in Division I.

you miss the point, CNSYD will always use semantics to try to point out that while they have two of the highest paid assistants (which is 100% clear from what you said about having 3 over paid coaches, with the 3rd being head cheerleader Dabo), they don’t pay those three as much as Spurrier’s entire coaching staff gets, so according to his attempt at wording your point must be wrong. Its a classic cover up tactic used when you have no actual point to make. In phycology that could be a classic example of why someone would buy a nice sports car, or dresses in a very flashy. Over compensating for something else less impressive is the most common reason. The 2nd is called a Napoleon Complex where you act bigger than you really are, which is something Dabo does as well. Im not saying which one it is, but I promise CNSYD knows the answer.

and the author of this tome says “phycology”

Thanks for proving my point Tiny. Come back when you finally have something

So humorous when the USCjr fans spend all their time concerned with Clemson. What Clemson does, how much Clemson pays people, etc. SOS has told you over and over that the goal is winning a SEC championship but you guys just don’t get it.

We are not the ones with the count down clock. Is that all you’ve got?

You should have started with And, not and. Also a you need to end with .

Well done. Additionally, when morons are called out in such a precise way, their only recourse is to point out spelling mistakes. And our Village Idiot has checked that boxed, as expected. But good call on 4th down…”Phyc”!

Phycology is the study of algae, and algae sometimes results in a Crimson Tide! Go Bama!

I am going to hold practice games against mediocre ACC teams, then I am going to kick me some Gamecock ass. That is what Dabo told me when he recruited me.

If Daniel High had 300 yards passing and two takeaways, the Lions would have beaten those yokels in Tallahassee.
As far as the ACC, Clemson will probably rebuild the way former powerhouses Virginia Tech, Miami, UNC and Georgia Tech have.
“If you want to play against the best, you have to play in the SEC,” Conner Shaw.

Maybe one day Clemson will be good enough to win a “top tier” bowl like the Outback Bowl.

Maybe, it the ACC signs a contract with them. I mean if the ACC hands out trophies for losing but playing better than Three-and-out Stoudt, maybe the ACC can land the Outback.

How do you fire a coach who puts you in the ACC championship game? You wait until he doesn’t get you in the game………eh, Dabo, the house next to Tommy Bowden’s is for sale. You guys can go jogging on the beach and laugh about those insane contracts you scored….Venables – they can’t promote you pal. It would look too much like the Bowden/Dabo scheme. How does North Carolina sound?

Please tell me why anyone outside Pickens Co. cares that the 1-2 Clemson Tigers are starting a true freshman against…………UNC?!!!! Gotta be the college football scoop of the year.

For the next 3 years your boys are gonna see so much of the South view of his North bound body that you’ll wonder who the hell that Cat is.

I bet they know who he is in Tallahassee…and every where else in the country too.

For the next 3 years your boys are gonna see so much of the South view
of his North bound body that you’ll wonder who the hell that Cat is.

Well, you have to get behind someone to kick them in the ass.

Ohhh…’How good it’s gone be.’ They been tellin’ us that since Danny exited the building. Dabo is just another in a long line.