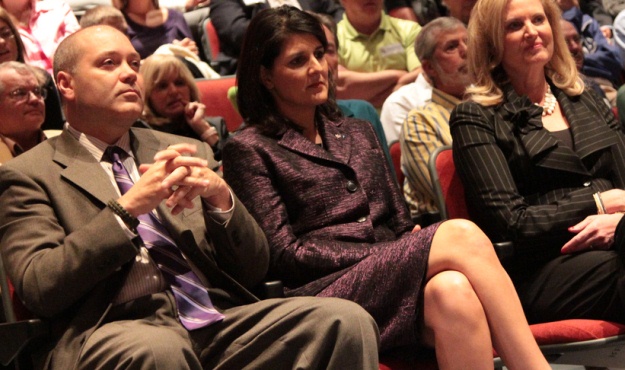 S.C. Gov. Nikki Haley is touring the Palmetto State this week with officials from the uber-liberal S.C. Chamber of Commerce, the group she derided in 2010 as being supporters of bailouts and corporate welfare.

“The state Chamber is a big fan of bailouts and corporate welfare, so it’s no surprise that they would prefer a liberal like Vincent Sheheen over a conservative like Nikki Haley,” the governor’s spokesman said at the time.

This year, though, the group has chosen Haley over Sheheen.

How come?  Because Haley has embraced bailouts, corporate handouts, tax hikes, spending increases and other anti-competitive, pro-government policies since she was elected in 2010.

Are those the policies of a “Republican?”  To say nothing of a “conservative?”

Anyway … this website has consistently called the chamber out for its left-leaning positions.  Same with other icons of the Palmetto State’s failed status quo.  Frankly, we think the fact Nikki Haley has “earned” their endorsement this year tells you all you need to know about her evolution as a politician.