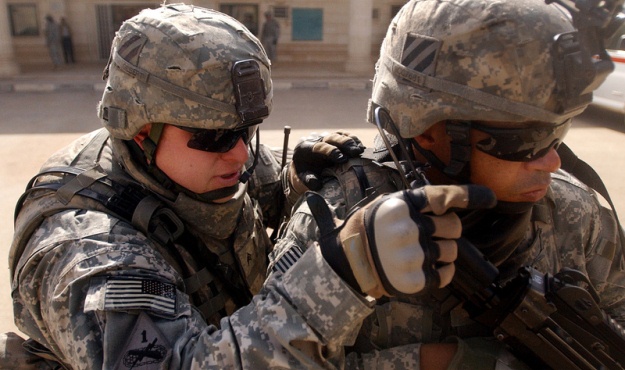 SUNNIS? SHIITES? NOT OUR PROBLEM …

The U.S. government fabricated the basis for its 2003 invasion of Iraq – a conflict that cost thousands of American lives and trillions of our tax dollars. Now faced with the abject failure of this intervention – notably the emergence of an al-Qaeda rebellion against the U.S.-backed “democratic” government in Baghdad – our politicians are once again beating the war drums.

U.S. Secretary of State John Kerry is even urging the formation of a U.S. military alliance with Iran – the nation warmongering Lindsey Graham said less than a year ago would nuke the city of Charleston, S.C. in the event America didn’t invade Syria.

Everybody keeping track of all this interventionist nonsense?

Good … because it gets very confusing (and very, very expensive).

“The same foreign policy ‘experts’ who lied us into the Iraq war are now telling us we must re-invade Iraq to deal with the disaster caused by their invasion!” former U.S. Rep. Ron Paul wrote this week. “They cannot admit they were wrong about the invasion being a ‘cakewalk’ that would pay for itself, so they want to blame last week’s events on the 2011 U.S. withdrawal from Iraq. But the trouble started with the 2003 invasion itself, not the 2011 troop withdrawal. Anyone who understands cause and effect should understand this.”

Sadly such common sense is lost on most people … especially those in power.

In response to the rapidly deteriorating situation in Iraq, U.S. President Barack Obama has ordered 275 American troops to Baghdad to shore up security at the U.S. Embassy there (a.k.a. asking for a fight).

Make no mistake … this is a provocation in search of an escalation, a move Obama hopes will spark a confrontation capable of rallying a war-weary America behind yet another failed, costly intervention.

Meanwhile headlines blare in American media about 9/11-style attacks being planned by the Islamic State of Iraq and Syria (ISIS) – with Lindsey Graham once again waxing apocalyptic about terrorist attacks he and his fellow warmongers are doing everything within their power to encourage.

“The seeds of 9/11s are being planted all over Iraq and Syria,” Graham said on CBS’ Face the Nation  Sunday. “They plan to drive us out of the Mideast by attacking us here at home.”

Which leads us to the question …

Why are we in the Middle East in the first place?

Seriously … in the battle between Sunnis and Shiites for control of Iraq, what do we care?

And please don’t say “because we have to fight al-Qaeda” because the last time we checked Graham was urging America to fight alongside al-Qaeda in Syria.

According to U.S. Speaker John Boehner’s office, “too many Americans sacrificed too much to allow Iraq to slip back into chaos.”

Really? So more Americans should lose their lives and our country should waste even more money as a consequence?

Continuing to militarily engage in Iraq is madness … pure madness. It is nothing but a sop to the nation’s military industrial complex, and has no bearing on America’s core national interests. As such, not another drop of American blood … nor another dime of Americans’ tax money … should be spent on Iraq.