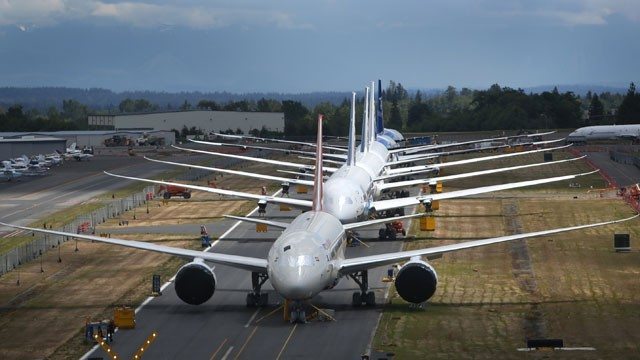 “HAIRLINE CRACKS” FOUND IN WINGS OF NEXT GENERATION JET …

“More Dreamliner problems.” Sheesh … that headline is getting kind of old, isn’t it?

Seriously … a more newsworthy story at this point would be if Boeing’s next generation passenger jet actually went a month without experiencing some sort of potentially debilitating mishap.

A month after a Dreamliner’s cockpit system “went blank” on an Air India flight from New Delhi to Melbourne, Australia, the 787 is back in the news with another problem.

This time it’s “hairline cracks” discovered in the wings of forty Dreamliners still in production, according to Reuters.

This time South Carolina workers – whose craftsmanship has been called into question as it relates to the 787 – are not the guilty parties. The problem reportedly stems from a production issue at Mitsubishi Heavy Industries Ltd, which manufactures the plane’s wings.

Still, it’s another setback costing the company time and money – the latter of which we’re sure it will find a way to recoup from gullible Palmetto taxpayers.

S.C. Gov. Nikki Haley and other status quo-supporting South Carolina politicians have bet big on Boeing and its Dreamliner – which continues to experience all sorts of problems in the wake of its global grounding last year. Boeing’s North Charleston, S.C. plant has had its share of issues, too – as first reported by FITS back in November.

Originally scheduled for launch in 2008, the Dreamliner was three years late due to numerous technical and supply chain issues. Since taking flight, it has been plagued by numerous problems – most notably an issue with its lithium ion batteries that resulted in several planes catching on fire.