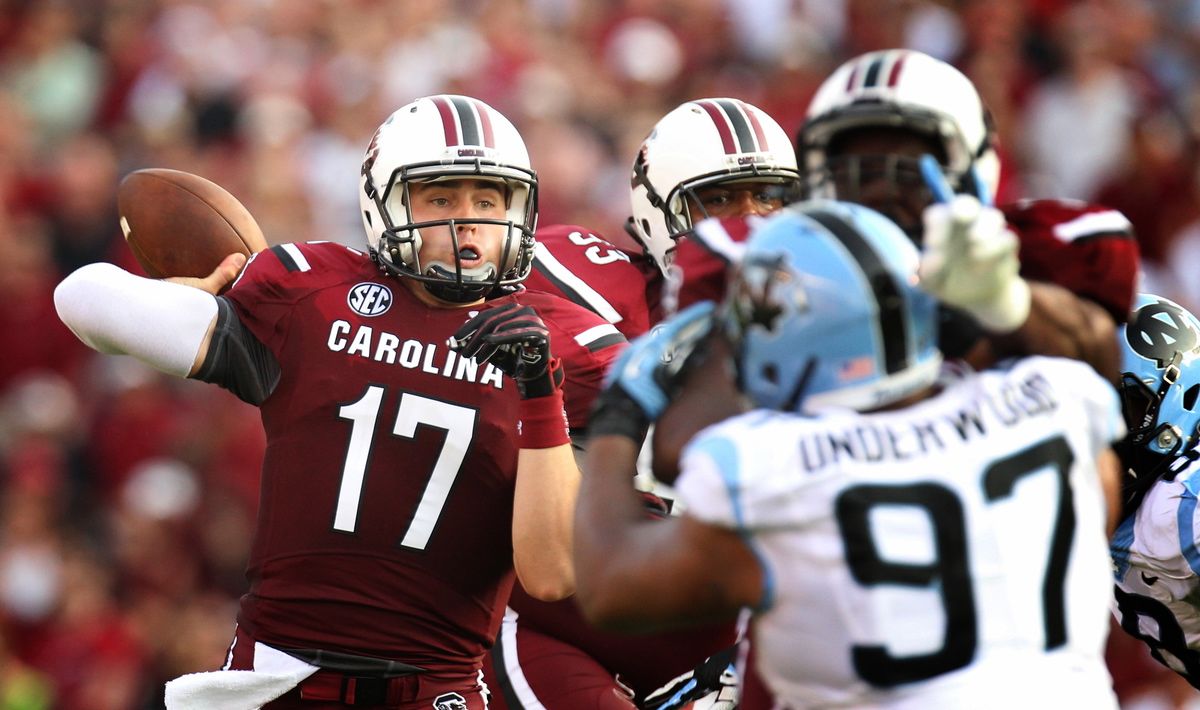 The game is a must-win for No. 21 South Carolina (5-2, 3-2 SEC) if the Gamecock hopes to keep their SEC East championship hopes alive.

Thompson – a 6-foot-3, 218-pound junior from Boiling Springs, S.C. – has completed 29 of 51 passes for 421 yards with two touchdowns and two interceptions this season playing behind senior signal caller Connor Shaw.

“Dylan’s a good player,” said South Carolina quarterbacks coach G.A. Mangus. “He’ll get his chance to go this week. He’s practiced good the last couple of days, but he always does. Dylan gets himself ready like he’s a starter, that’s why I don’t worry about Dylan. He’ll be ready to roll.”

Shaw may play against Missouri – which lost its starting quarterback James Franklin to a separated shoulder two weeks ago.

“You never know. We’ll see,” Mangus said of Shaw. “He’s getting better every day … we’ll just have to see how the next few days go.”

Thompson has won both of his career starts – a blowout win over East Carolina at home last season and a hard-fought win on the road over then-No. 11 Clemson. His most extensive action this year came on the road against Central Florida after Shaw went down with a shoulder injury.

Saturday’s game will kickoff at 7:00 p.m. EDT from Faurot Field in Columbia, Missouri. ESPN2 will televise the game nationally with Joe Tessitore, Matt Millen and Maria Taylor calling the action.

I like Dylan, but not too hopeful for this one.

Dylan’s had some good games against some good teams, on the road. I like our chances. So does Vegas. Catching 2.5 from an undefeated team on the road is pretty respectable. We shall see.

This will be the one that the oddsmakers will miss big this week; Mizzou in an almost blow-out, Missouri is hardly missing Franklin, unlike the Cocks who will miss Shaw all Sat. evening long. And it will be a long, long evening with tail feathers flying everywhere. Look for Clowney to leave the game early due to a blister on his left big toe because…. he can play if he wants and not if he doesn’t want per his head coach. The Cocks biggest problem(s) will be two-fold, 1) Lack of Shaw 2) A defense that is increasingly undisciplined and without purpose (read this, missing a leader).
These Tigers have all but wrapped up the SEC East and are looking to make a statement to move up in the BCS rankings and they will do it in a big way against the increasingly hapless chickens.
Missouri 48
South Carolina 21

Cocks by a field goal in a shootout.

Now how did the Colonel know that? And I thought the term”Army Intelligence” was an oxymoron…….

UNBELIEVABLE ! – ya’ picked it on the nose!

We couldn’t get 4 yards to win a game last week against a terrible Tennessee team. We will be luck if Missouri doesn’t hang 40+ points on us on their field.

Who will be the backup QB…Connor Mitch? Sophomore running sensation Mike Davis is going to get his first 200 plus yards opening up the passing routes. Mike runs over his tacklers like Herschel Walker. SC wins by three touchdowns.

Just looking at the records, TBG would favor Missouri by two touchdowns.

I’ve been on the edge of my seat worrying about this.

Not a homer site, huh? Please tell us one more time about banging Haley, too.

Note to Missouri and Chad Morris, USCe plays like shit when you run the ball down their throats.

Hi there, Cush! …and thanks for some cleavage, which Fitsnews needs more of — and those “cushions” look mighty fine!

Spurrier should read this article about Alabama’s sanction of the student block seating and the half-time vacating of same. Shifty did not know that a handbook for student seating existed. Carolina may have one………………

Just to be contrary and without any evidence whatsoever, I predict that both teams will meet on the field and play football.. but don’t hold me to that. Mizzou by 3 & Clem’s Son by 16.5 is what the pros are quoting. Frankly, I don’t trust either set of odds, considering the Pros’ lack of success over the past 7 weeks.