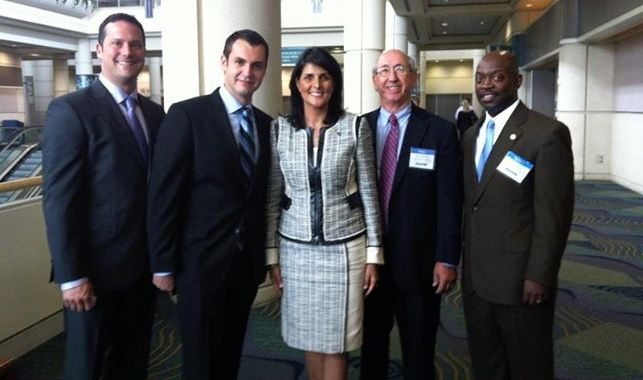 It was “a great day in South Carolina.”

But did you know the total amount of taxpayer-funded incentives awarded to this company will wind up being more than twice the company’s capital investment? And did you know that the head of the company has been accused of receiving millions of dollars from a massive Ponzi scheme?

“The company will be given job creation credits and a rural infrastructure grant of $1.3 million,” the Associated Press reported at the time of the announcement, citing the company’s $7.5 million capital investment.

The AP (a.k.a. Haley’s press office) neglected to mention the rest of the incentive package, though. Or the legal troubles surrounding the company’s president Michael O’Shaughnessy.

Over the fifteen-year duration of the deal, the company will receive $14.8 million in government subsidies according to reporter Rick Brundrett of The Nerve.

And guess what: Brundrett’s analysis doesn’t include perhaps the biggest incentive Element Electronics will receive – a property tax break that will wind up shifting the tax burden even further onto local residents and existing businesses.

Such anti-competitive deals are par for the course in the Palmetto State … in fact they have ramped up dramatically under Haley. But no one ever talks about the flip side of all this “economic developing” – the cost to taxpayers and the families and businesses struggling to make ends meet.

And that’s the great con …

“Economic development” in South Carolina is nothing but government stealing your money and using it to bribe select companies to locate here – at which point you continue to pay for this “investment” in the form of higher taxes.

It’s robbery … for which our elected officials are rewarded with glowing headlines from the mainstream media (and usually a few campaign contributions to boot).

And judging by our state’s shrinking income levels and contracting workforce – it’s not working.