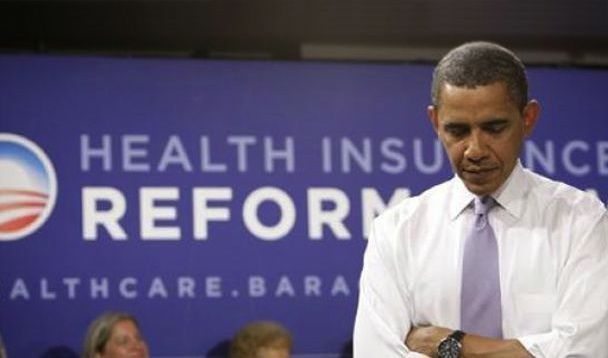 As the “Republican” U.S. House of Representatives grappled over whether to defund Barack Obama’s socialized medicine monstrosity – or merely pretend to defund it – the real-world consequences of the legislation are beginning to be felt across a still-reeling economy.

And no we’re not just referring to the tax hikes, the added deficit spending or the soaring health care premiums … we’re talking about actual lost jobs and reduced wages.

One reporter – Jed Graham of Investors’ Business Daily – has compiled “a list of job actions with strong proof that Obamacare’s employer mandate is behind cuts to work hours or staffing levels.” As of this writing Graham’s list includes “job actions” by 258 companies.

In another story published last week, Graham exposed the correlation between the onset of Obamacare and a drop in hours among rank-and-file workers.

“Workers in low-wage industries clocked the shortest average workweek on record in July,” he noted. “The 29 million non-managerial workers in private-sector industries which pay up to about $14.50 per hour, on average, put in a 27.4-hour week, a level previously matched only at the depths of the recession in 2009.”

This data is further proof that the GOP needs to stand firm in blocking funding for Obamacare. Seriously … if Obama wants to shut down government over this job-killer, “Republicans” should tell him to knock himself out.

“The government should encourage productivity, not penalize it,” a recent editorial in The Washington Times noted. “Obamacare is a prescription for a shrinking economy, and the nation won’t recover from stagnation as long as it remains the law. In the weeks ahead, the House will get one last chance to prevent the train wreck. The House must stand firm and refuse to fund the president’s health care takeover.”

Obama’s the only idiot backing this POS and you’re a racist if you disagree with him.

guess that makes me a non-racist racist

I save a lot of time by disregarding Obamacare articles that contain the phrase “train wreck.”

You must not read any articles written about Oamacare these days.

“The government should encourage productivity, not penalize it,”

The government should encourage fair, affordable, and secure access to health care, not penalize those who need it most. Too bad the GOP doesn’t give a flying fuck about health care reform that actually helps the uninsured.

Sadly, neither do Democrats – at best, Obummercare adds just under 10% of Americans, roughly 30,000,000 to the roles of in the insured (and that number is very debatable).
What most don’t know is that there are a minimum of 46,000,000 Americans without any health insurance of any kind according to the last Census (the real number is purported to be more like 56-60,0000,000). There is more than sufficient evidence that the “employer health mandate” is forcing employers to reduce the number of hours of their employees, driving more people into the roles of the “uninsured”.
This will have two effects, dramatically increase the numbers of people driven into the guvamint insurance pool and dramatically increasing the cost of the program OR forcing the death panels and health care rationing to be imposed.
Either way, it’s a train wreck for which the president and congress should be rebuked.

The first thing they ought to do is end the socialized medicine type health care system for the military and military retirees.

Bring back the draft and you’d probably get away with it. In fact, bringing back the draft and making it retroactive to about 1975 would be ideal.
Funny thing about the “socialized medicine” provided to the military – if you figure the cost of keeping a trained Soldier well vice replacing a sick soldier when he dies, keeping a trained Soldier well wins every time. Most wartime deaths throughout history are not “killed in action of wounds” but deaths due to disease.
For the record, in the last 5 years, I paid out of pocket for my health care 1,095 days. For the 730 days that I was provided with “socialized medicine”, the nearest “pay as you go” medical treatment facility that accepted “Blue Cross” or “Blue Crescent” or payment of any kind was about 8,000 miles away.

Since it sucks so bad,Im sure you join me in saying

GET RID OF IT!

Get rid of what? The military’s healthcare provision system? What part of the explanation I just gave you for it are you to stupid to understand?
Dude I’m a reservist. I’m on active duty right now and was in 2009-2010. The rest of the time I have the same insurance anyone else can have – the kind I pay for. The health care (not to be confused with insurance) the Army provides is top notch, I have no complaints about it at all.
However, my wife who has to change doctors when we go from my normal pay out of pocket plan to Tricare (the military’s plan) isn’t all that thrilled. By making a co-payment she can use pretty much anyone she want, it’s all part of the benfits package we have – just like the one you have down at the glue factory or whereever it is you work. You may want to check your air filters in you protective mask, the fumes are affecting your brain.
It damn sure ain’t free.

You military retirees make out like bandits and everyone knows it.

“Slop at the public trough.”

Yeh you bastards really have it tough.Next thing ,cut you damn bloated pensions, particularly for the officers.

Gee, I’m sorry, I didn’t mean to offend you by calling you stupid, but pay attention – I’m not retired. I’m currently sitting in a @*$&$^ desert wearing an ugly uniform.

When I finally do retire I won’t draw a dime until I’m 60. I’m a Reservist, we don’t normally draw a cent until our 60th birthday and at 65, our retirement has a Social Security offset.
“Slop at the public trough” – sure you could call it that. For a minimum of 20 years of service you we get a pretty good retirement. In exchange for that retirement, I’ve missed 15 of my last 22 anniversaries, most of my children’s birthdays, been deployed four times and been on training missions more times than I care to think about.

Both of my knees and hips are trashed from bad landings. I had to close a successful business because of a deployment. My current career is not where it should be because I have to be gone frequently for military training, missions and deployments but I’d do it all again because I think it is important that somebody be willing to pick up a rifle stand a post.

On second thought if I had considered whiney, stupid, little bitches like you in choosing a career I’d have become a stockbroker or a plastic surgeon. Have a nice day!

Defunding will never happen. The GOP is like a herd of buffalo racing to the edge of the cliff. They will fall over and will die en masse. Their viscera will be eaten for months and years by the smarter people, the people with sense.