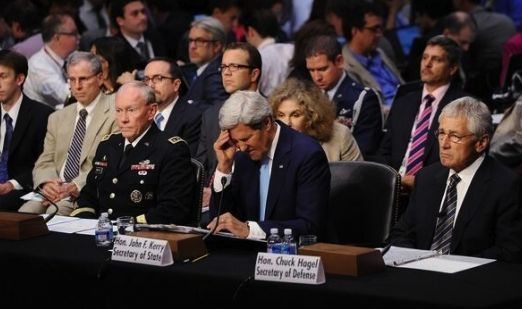 U.S. Secretary of State John Kerry is notorious for being a flip-flopper. In fact his infamous support/ opposition for an $87 billion Iraq War appropriation as a Democratic U.S. Senator in 2003 led to one of the memorable quotes of the 2004 presidential campaign.

“I actually did vote for the $87 billion before I voted against it,” candidate Kerry said.

The more things change, the more they stay the same. Kerry is flip flopping again – this time almost instantaneously – on whether American military intervention in the Syrian civil war should include “boots on the ground” (i.e. U.S. combat troops fighting inside Syria).

“In the event Syria imploded, for instance, or in the event there was a threat of a chemical weapons cache falling into the hands of al-Nusra or someone else and it was clearly in the interest of our allies and all of us, the British, the French and others, to prevent those weapons of mass destruction falling into the hands of the worst elements, I don’t want to take off the table an option that might or might not be available to a president of the United States to secure our country,” he said.

Moments later, though, Kerry took the option he was explicitly leaving on the table … off of the table.

“I don’t want anybody misinterpreting this from earlier,” he said. “This authorization does not contemplate and should not have any allowance for any troops on the ground. I just want to make that absolutely clear. What I was doing was hypothesizing about a potential – it might occur at some point in time – but not in this authorization.”

“I sure hope they’re planning their military operations a little better than their Hill testimony,” Keith Koffler of White House Dossier wrote.

For those of you keeping score at home, the latest polling shows overwhelming opposition to any American military intervention in Syria.

@fitsnews How do more people not realize this? I fear for my chidren's future.

Conservative PAC: Vote “NO” On Syria

All Eyes On US Senate Money Race

The first picture says it all, “Don’t eat ice cream right before an important briefing.”

Actually, he just realized that he was smelling his own farts.

If we fly aircraft over Syria territory there will be boots on the ground. I believe the Russians will have their best anti-aircraft weaponry in that country (why not have your friends test your stuff) and it is inevitable that aircraft will be shot down, any guess how many of the aircraft flying sorties over Syria will be French? If even one airman is left to the Syrians, I can’t think of anything ugly enough to say. If the US flies over Syria there will be boots on the ground shortly there after.

Exactly – I may have something to add later…..

John Kerry walked into a bar.

The bartender asked, “Why the long face?”

John Kerry walks into a bar. The bartender asks, “Why the long face?”

Kerry replies,” I just can’t get Barry to understand that the shuddering shoe and the blinkety-blanks when the punglung falls from the bough in the blast of a hurricane’s hicketty-hanks over the hills of the hocketty-how”

Former CIA agent debunks the current intelligence analysis laid out by our gov’t:

Nice find. Seen this one?

Can you say Megiddo

Got it covered. Just another Nuclear option in the playbook. Index Mideast scenario.

the facial fillers and botox are seeping into his brain….

In case you’re missing it, Jeff Duncan is hammering Kerry in the House Hearings

In case you missed it Kerry made Duncan look like the Rube he is.

The press corps appeared stunned by the uncharacteristic outburst from Mr. Obama, who then unleashed a ten-minute tirade at the stone-faced Russian President.

“Look, I’m not just talking about Snowden and Syria,” Mr. Obama said. “What about Pussy Riot? What about your anti-gay laws? Total jackass moves, my friend.”

As Mr. Putin narrowed his eyes in frosty silence, Mr. Obama seemed to warm to his topic.

“If you think I’m the only one who feels this way, you’re kidding yourself,” Mr. Obama said, jabbing his finger in the direction of the Russian President’s face. “Ask Angela Merkel. Ask David Cameron. Ask the Turkish guy. Every last one of them thinks you’re a dick.”

Shortly after Mr. Obama’s volcanic performance, Mr. Putin released a terse official statement, reading, “I should be afraid of this skinny man? I wrestle bears.”

After one day of meetings, the G20 nations voted unanimously on a resolution that said maybe everyone should just go home.