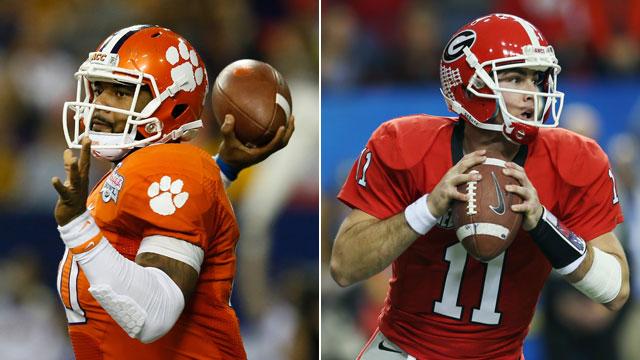 Eighth-ranked Clemson University’s season opening matchup against the fifth-ranked Georgia has been pegged as college football’s “Marquee Matchup” by the presenters of the 2013 Davey O’Brien National Quarterback Award.

“After record-setting seasons for both Tajh Boyd and Aaron Murray, the 2012 Davey O’Brien Semifinalists look to raise their stock and keep their teams in the hunt for a national title as they kick off their final collegiate seasons on Saturday night,” a release from the Fort Worth, Texas-based organization notes.

Um, yeah … Boyd and Murray are first-team All-Conference performers with legitimate Heisman Trophy and national championship aspirations. Not only that, Murray needs just 1,438 yards to become the SEC’s all-time passing leader, while Boyd is hoping to become the first Clemson quarterback ever to lead his team to three straight 10-win seasons.

Clemson and Georgia kick off at 8:00 p.m. EDT on Saturday from Death Valley. ABC will televise the game nationally, while ESPN will host its College Gameday program from Tigertown.

Which quarterback do you think will have the best game? Vote in our poll and post your thoughts in our comments section below …