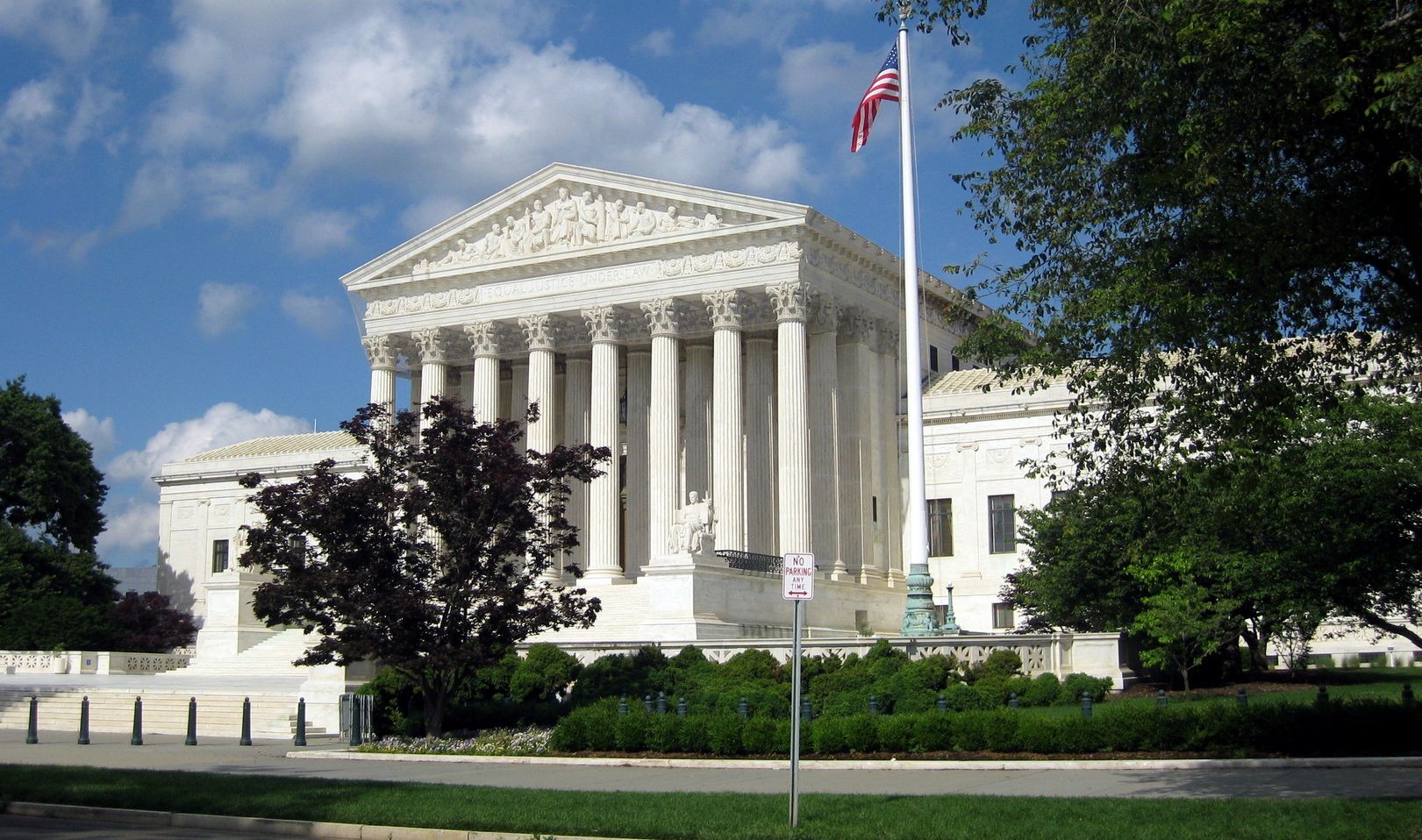 In the middle of the month in which its decisions for the year are handed down, the Supreme Court of the United States (SCOTUS) promulgated a new rule yesterday banning protests on its grounds, only two days after a broader anti-demostration law was declared unconstitutional by a federal judge.

Earlier this week, U.S. district court judge Beryl Howell threw out a 1949 federal law making it a crime to “parade, stand, or move in processions or assemblages,” or to display a “flag, banner, or device designed or adapted to bring into public notice a party, organization, or movement,” at the Supreme Court’s building or on its grounds. A challenge to that law was brought by Harold Hodge Jr., who was arrested on the Supreme Court plaza in January 2011 while wearing a sign that criticized police treatment of blacks and Hispanics.

The charge against Hodge was later dismissed after he agreed to stay away from the court and its grounds for six months, but he chose to challenge the law that got him arrested in the first place with assistance from the Rutherford Institute, an organization that describes itself as dedicated to the defense of civil liberties and human rights. In defending the 1949 law, the court argued that it was necessary to ensure the ability of people to enter and leave the building and for “preserving the appearance of the Court as a body not swayed by external influence.”

In her ruling, however, Judge Howell called this law “unreasonable” and “substantially overbroad.” She said there were ways to accomplish the court’s desire to maintain order without such a broad statute, noting that a Washington, D.C. law allows law enforcement officials to prevent protesters from blocking the entrance to buildings.

“It cannot possibly be consistent with the First Amendment for the government to so broadly prohibit expression in virtually any form in front of a courthouse, even the  Supreme Court,” the judge wrote in ruling the law unconstitutional. The First Amendment to the Constitution protects “the right of the people peaceably to assemble, and to petition the Government for a redress of grievances.”

The judge’s order refers only to the Supreme Court plaza – which is where Hodge was arrested – not the courthouse itself or its other grounds.

The Court’s new regulation, the timing of which was obviously prompted by Judge Howell’s decision, can be found on its website as approved and effective June 13, 2013. It reads in full:

No person shall engage in a demonstration within the Supreme Court building and grounds.  The term “demonstration” includes demonstrations, picketing, speechmaking,  marching, holding vigils or religious services and all other like forms of conduct that involve the communication or expression of views or grievances, engaged in by one or  more persons, the conduct of which is reasonably likely to draw a crowd or onlookers.  The term does not include casual use by visitors or tourists that is not reasonably  likely to attract a crowd or onlookers.

Thus, the new rule appears to circumvent Judge Howell’s decision, making the large marble plaza in front of the court off-limits to protesters again, as it is part of the court’s “grounds.” In fact, John Whitehead, the president of the Rutherford Institute said that the court’s new regulation was “repugnant” to the Constitution and vowed to challenge it. Hodge, the original petitioner, also said he would return to the court’s plaza to protest.

I find the assertion that Supreme Court’s need “to maintain suitable order and decorum” trumps American citizens’ constitutional right to peaceably assemble and protest to be absurd. The high court is the place where the constitutionality of the laws passed by Congress is determined. It is an essential part of our federal system of checks and balances and the place of last redress for those who have complaints against our government. It is reasonable to assume, then, that citizens on both sides of an issue will gather to express their opinions on issues that are understandably fraught with emotion as cases regarding our basic rights as Americans are argued there and decisions are handed down.

The rights guaranteed in the First Amendment are not absolute, as the courts have held, but in this case there are already mechanisms in place to ensure that suitable decorum is maintained. Americans have a right to peaceably assemble and protest. Anyone who breaks a law in the process of such a protest can be arrested, and, as Judge Howell noted in her opinion striking down the 1949 law, the D.C. police are already authorized to arrest anyone who attempts to block the entrance to the court.

The court’s argument that it needs protesters to stay away in an effort to maintain an air of impartiality is equally absurd. The top nine legal scholars in the nation who work in a heavily guarded building are no more likely to be swayed by people picketing outside that building than they are by the evening news, which they are not prohibited from watching as they pen their opinions. To argue that they must sequester themselves from any signs of dissent in order to appear to the public to not be unduly influenced by a group of people carrying a banner or wearing matching t-shirts is ridiculous.

With this new rule, the Supreme Court has essentially told Americans who care enough about an issue to come from hundreds of miles away to exercise their constitutional right to peacefully express their opinion in public that they are not welcome to do so on the grounds of the highest court in the land. This is a right that Americans have fought and died for, and it is a right that we criticize other countries, such as Turkey and China, for denying to their citizens.

The court’s large marble plaza and the steps leading up to it aren’t just pieces of real estate. They are public symbols of American jurisprudence, and if we are to remain faithful to the principles of free speech and assembly therein, we must allow protesters to use those public grounds to peacefully express their opinions – we must not relegate them to the sidewalk.