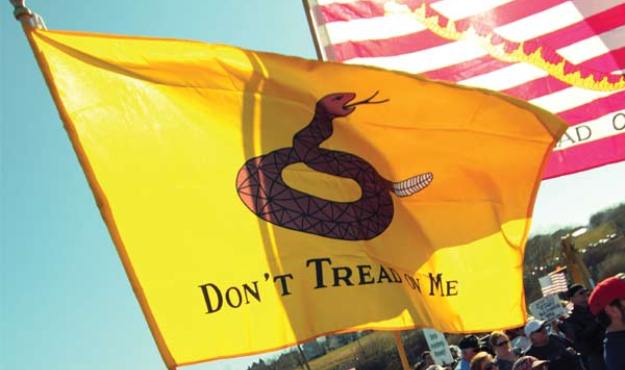 Since the federal government already has plans to put down a “Tea Party”-led insurrection in South Carolina (no, really), it shouldn’t shock us to learn the U.S. Military Academy in West Point is busy educating future officers about the “enemy” they’ll soon be facing.

According to The Washington Times, the Academy has issued a new report entitled “Challengers from the Sidelines: Understanding America’s Violent Far-Right.”

Wait … what? Aren’t those principles upon which this country was founded? Of course … but supporting them has suddenly become a sure-fire way to wind up in the government’s cross hairs (ideally without any means to defend yourself).

The West Point report also discusses how these violent right wingers “espouse strong convictions regarding the federal government believing it to be corrupt and tyrannical, with a natural tendency to intrude on individuals’ civil and constitutional rights.”

Again … anything inaccurate about that statement?

Then there’s this doozy of a quote …

While liberal worldviews are future- or progressive -oriented, conservative perspectives are more past-oriented, and in general, are interested in preserving the status quo. The far right represents a more extreme version of conservatism, as its political vision is usually justified by the aspiration to restore or preserve values and practices that are part of the idealized historical heritage of the nation or ethnic community.

Ordinarily we’d call “bullshit” on that, but God forbid a domestic spying program interpret such criticism as “hate speech.”

Welcome to the new America, people … where it’s quickly becoming criminal to be “American.”