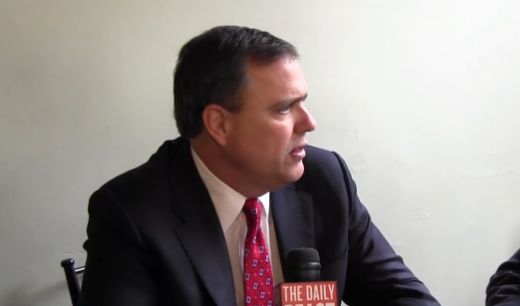 AND HE’S DROPPING SOME “MAD” CASH …

Former S.C. Senator John Kuhn (RINO-Charleston) is jumping into the race for first congressional district seat being vacated by Tim Scott – and plans on pumping a quarter million dollars of his own money into the bid.

Kuhn – who famously sparred with former S.C. First Lady Jenny Sanford  during his tenure in the S.C. General Assembly – lost his seat in 2004 to Chip Campsen, a close friend of the Sanford family.  Ironically, Campsen is also contemplating a bid for the soon-to-be vacant first district seat … and Jenny Sanford’s name has also been mentioned as a possible candidate.

A tax-and-spender during his legislative career, Kuhn has recently found fiscal religion – as evidenced by his 2012 endorsement of U.S. Rep. Ron Paul’s presidential bid.  Has he found his marbles, though?  Famous for his long-winded, high-pitched, borderline incomprehensible tirades from the well of the State Senate, Kuhn is … how do we put this nicely … nuts.

In fact during one rant he boasted that he would eternally hold the entire S.C. General Assembly hostage to his “whim.”

If only he had succeeded …

Anyway, whether Kuhn has found his marbles remains to be seen … but he’s clearly found his checkbook.  And while he isn’t going to win this race (God help us if he does), his $250,000 self-financing pledge shows just how expensive this race is going to be.

Candidates who want to have a shot better start dialing for dollars … and fast.

Kuhn is the second politician to formally announce his candidacy for Scott’s seat – joining Charleston, S.C. businessman Teddy Turner IV (son of media mogul Ted Turner).  Numerous other candidates are expected to announce their intention to seek the seat in the days to come, though (for a list of who they are, click here).

UPDATE: Here’s a draft of Kuhn’s press release we were forwarded … 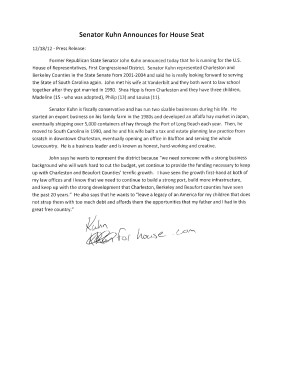