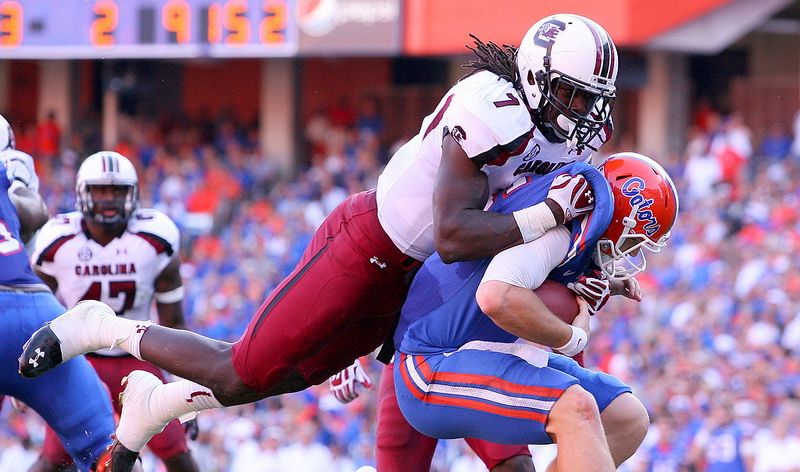 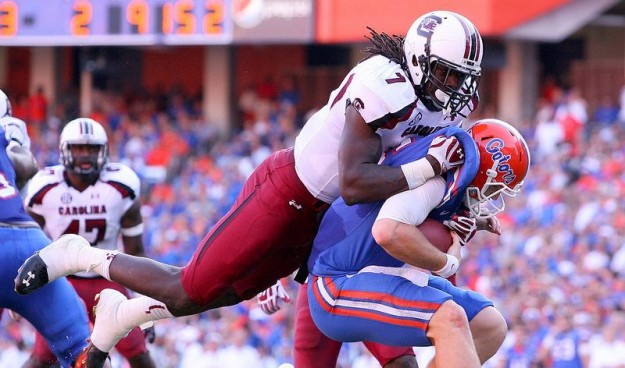 University of South Carolina defensive end Jadeveon Clowney won the Hendricks Award this week as the best defensive lineman in America – the first sophomore ever to receive the honor.

The nation’s leader in sacks (13) and tackles for loss (21.5), Clowney is the second Palmetto State standout in the last three years to capture the Hendricks Award – following Clemson’s Da’Quan Bowers, who won it in 2010.  He is only the second Southeastern Conference player to win it, following two-time winner David Pollack of Georgia (2003-04).

After winning SEC Freshman of the Year honors in 2011, Clowney took a major leap forward this season – emerging as the most disruptive force in all of college football.

The Hendricks Award is named after former University of Miami lineman/ linebacker Ted Hendricks (a.k.a. the “Mad Stork). After a stellar collegiate career, Hendricks played fifteen seasons in the National Football League for the Baltimore Colts, Green Bay Packers and Oakland Raiders.

“He has a constant motor, a strong work ethic and never seems to tire,” Hendricks said.  “He gave opposing blockers nightmares all season. If they blinked, Jadeveon was already past them.”

Dude, I am a big time Carolina fan, but you can’t compare this line to a pro line. Clowney can play in the NFL, but it IS the NFL.

Is that you Tom Davis? Because that sounds like something he would say. JD is a special talent no doubt. Glad he is on my side but NFL not YET but he will get there and in a big way.

Clowney sacks are fast approaching the number of hits here at Fits! That’s what I’m talking about!

He can thank Tajh Boyd for helping him seal the deal.

CU’s Freeman is an Academic All American. I guess Clowney colored outside the lines like the rest of the hoods.

Yep. Clowney colored outside the lines, tore the coloring book in half, ate all the crayons in one gulp and slapped the shit out the teacher. Nuff said! *Burp*

and you are still stuffed in a locker nerd.

Really? That’s where you are?

Please; it’s football. If you want an academic competition I would suggest an academic quiz bowl, or maybe catch some Jeopardy after Wheel of Fortune.

Brings to mind one of the best Doc Holliday lines from the Tombstone movie:

Ike Clanton: What is that now? Twelve hands in a row? Holliday, son of a bitch, nobody’s that lucky.

Doc Holliday: Why Ike, whatever do you mean? Maybe poker’s just not your game Ike. I know! Let’s have a spelling contest!

Maybe next year at Williams Brice we’ll have a spelling contest. Not saying CU would win that, but they may have a better shot at that than the game on the gridiron…

Clwney has since been named a Sporting News and Walter Camp All-American as well.

No player from Clempsun won the Heisman? Shock….they had all the candidates