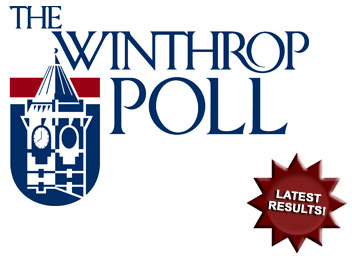 RESULTS OF LATEST WINTHROP POLL ARE IN

48% OF SC RESPONDENTS SAY THEY APPROVE OF HIS JOB PERFORMANCE, WHILE 41% GIVE IT A THUMBS DOWN

MORE THAN 90% SAY THEY DO NOT CONSIDER

THEMSELVES MEMBERS OF THE TEA PARTY

WOULD HAVE RACKED UP ABOUT THE SAME RESULTS

AS MITT ROMNEY DID VS. OBAMA

NEARLY HALF THINK THAT ECONOMIC

CONDITIONS IN SC ARE GETTING BETTER

ROCK HILL, S.C. – The results of the latest Winthrop Poll, of 929 respondents living in South Carolina are in. The survey was in the field from Nov. 25-Dec. 2, 2012. After weights (for sex, age, and race) have been applied, results which use all respondents have a margin of error of approximately+/- 3.5% at the 95% confidence level. Results that use less than the full sample (e.g. just Registered Voters or just those who voted in the 2012 presidential election) will naturally have a higher margin of error.

For data of those who voted in the 2012 presidential election, the sample size is 600 and after weights (for sex, age, and race) have been applied, results which only use these respondents have a margin of error of approximately +/-4% at the 95% confidence level.

For additional information on methodology, see conclusion of poll.

Among the Winthrop Poll findings:

*Census percentages are ONLY for those S.C. residents age 18 and over.

As was demonstrated by the national election outcome, people who suggest reweighting (or “unskewing”) polls based on a snapshot of self-reported partisanship have a fundamental misunderstanding of polling, in general, and sampling in particular.

A better test of the accuracy of our sampling would be to compare reported votes from our respondents to the actual vote in the recent presidential election.  Reported vote from the Winthrop Poll seen below represent answers from those sampled who were screened first for registration status and then for whether or not they actually voted.

T.4 Do you approve or disapprove of the way Barack Obama is handling his job as President of the United States?

T.5 Do you approve or disapprove of the way Congress is handling its job?

T.6 Do you approve or disapprove of the way Nikki Haley is handling her job as Governor of South Carolina?

*NOTE: Due to larger number of “Not Sure/ Don’t Know” answers, comparisons to national figures (where there are notably fewer ‘Not Sure/ Don’t Know’) are erroneous.  Also remember that point estimates that are within the margin of error are functionally equivalent.

**NOTE: When those who express no opinion or refuse to answer are removed, Gov. Haley enjoys a roughly 50/50 approval rating when the margin of error is factored in for all respondents, registered voters, and those who voted in the 2012 presidential election.  She enjoys notably higher approval ratings among Republicans and Independents who Lean Republican (who are also registered to vote — partisanship is self-reported; we do not register by party in South Carolina)

T.7 Do you approve or disapprove of the way the South Carolina State Legislature is handling its job?

T.8 Thinking about the current path that our nation is taking, do you think our country is on the right track or headed in the wrong direction?

*NOTE: Those in the Republican/Leaner column are registered to vote and identified themselves as Republicans or Independents who lean Republican, but they may or may not have voted in the January 2012 SC Republican Presidential Primary

T.11 What do you think is the most important problem facing the United States of America today?

(Top four responses listed.  Response options are not read to respondents.  Interviewers code responses into one of 29 answer options)

T.12 What do you think is the most important problem facing the state of South Carolina today?

(Top four responses listed.  Response options are not read to respondents.  Interviewers code responses into one of 29 answer options)

T.14 Right now, do you think that economic conditions in the country as a whole are getting better or getting worse?