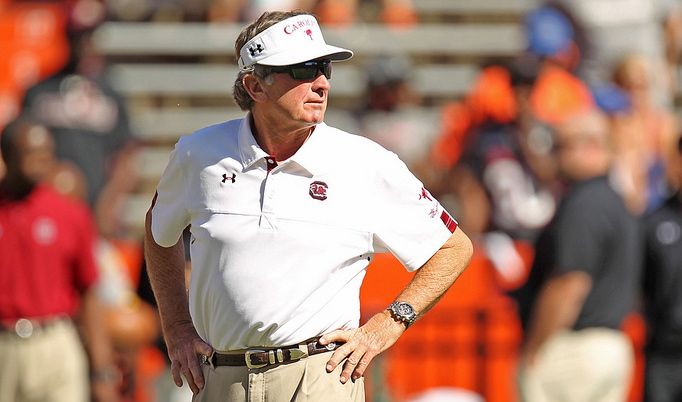 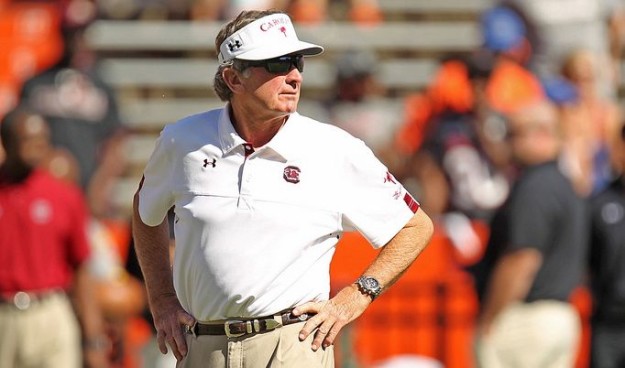 COMMENTS AT “MARCUS LATTIMORE DAY” BEING BLOWN OUT OF PROPORTION

University of South Carolina head football coach Steve Spurrier has had a pretty good war of words going with Clemson University head coach Dabo Swinney … but the latest chapter really shouldn’t be considered as part of that ongoing tradition.

Spurrier is catching flak for comments made at a rally celebrating star Gamecock running back Marcus Lattimore – who suffered a gruesome injury to his right knee during the Gamecocks’ 38-35 win over SEC East rival Tennessee on Saturday.  Lattimore’s injury was initially feared to be career-ending, although it now appears he could return to the football field in 2014.

Anyway, while speaking at the Lattimore tribute event Spurrier noted that there had been an outpouring of support for the fallen Gamecock star – including positive comments from Swinney.

“A lot of quotes came across the country and I read one today from the head coach at our upstate school,” Spurrier said.  “You know, that school that used to beat us a lot that doesn’t beat us much anymore, that one. Usually when that coach up there talks about South Carolina it’s a bunch of garbage and a bunch of B.S. usually. But I have to agree with him – I have to agree with him on what he said the other day – he said, ‘Marcus Lattimore stands for what’s right about college football.'” 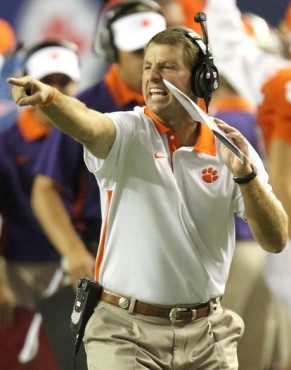 Obviously these two coaches’ talking trash is nothing new – but many questioned Spurrier’s comments owing not only to the occasion, but also to the fact that Swinney had handled questions about Lattimore’s injury with such class.

“It took my breath away,” Swinney said when asked whether he had seen the gut-wrenching video of Lattimore’s knee nearly coming off. “I was watching it and it just breaks my heart. I mean I just hurt for him and his family and his teammates.  This is a guy that to me represents all the good things that college football should be about.  He’s a guy I know personally, he’s a class young man and so is his family. I know how hard he has worked.”

Swinney continued, “if there is anybody I would bet on it is Marcus Lattimore. I know it will be a long process, but I tell you what, I would put my money on Marcus Lattimore in a heartbeat. When he comes to terms with this, he will do everything he can to come back. My prayers go out to him and his family. I have been heavy-hearted for him. He is a winner in every regard. Hopefully we haven’t seen the last of him from a football standpoint. He has been a great representative for his family and his university. I will lift him up in my prayers.”

According Dan Wetzel of Yahoo! Sports, Spurrier’s response to Swinney “took it to the worst of the political game, where the other guy is never anything but a terrible person and even his good ideas are to be held in contempt.”

Wetzel added that Spurrier “acted like the worst of the fans, obsessed with not just wins and losses but humiliations and insults, focused on slight differences rather than massive commonalities.”

Watching the video of Spurrier’s comments, though, it seems pretty clear that his remarks weren’t intended to be incendiary.  In fact Spurrier’s mild trash talk appears to have been a prelude to praising Swinney – and getting the Gamecock faithful who attended the rally to show the Clemson coach some love.

This website has criticized both Spurrier and Swinney in the past for saying and doing stupid things.  In this case, however, Swinney showed a lot of class in remarking on Lattimore’s injury – while allegations that Spurrier acted condescendingly in response appear to be greatly overstated.

Verdict? The whole thing is one big nontroversy.

Gamecocks Climb To No. 8 In BCS