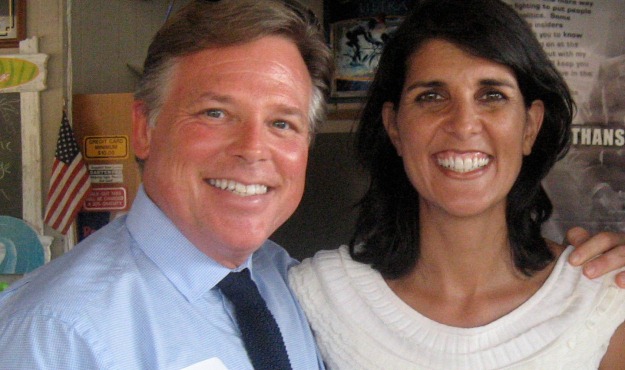 S.C. lobbyist Larry Marchant has signed an affidavit backing up his claim to have had “sexual intercourse” with S.C. Republican gubernatorial nominee Nikki Haley. Marchant’s affidavit – sworn before a notary public in Richland County – reiterates his previous public statement that he and Haley had a one-night stand at a legislative conference in Salt Lake City, Utah.

“After a night together of dinner and drinks with other participants of the conference, Representative Haley and I returned to the hotel together,” Marchant states in the document. “We went back to her room where we had sexual intercourse and I spent the remainder of the evening. I left her room at approximately 6 a.m.”

Haley continues to deny both claims – but is refusing to sign an affidavit to that affect. She has also refused to release taxpayer-funded email and phone records requested by members of the media – citing a legislative exemption.

Haley’s campaign responded to Marchant’s affidavit by claiming that the longtime lobbyist and former staff member to Republican Gov. Carroll Campbell had failed a lie detector test back in June – although that charge is inaccurate. Marchant’s polygraph exam – sponsored by WACH TV 57 (Columbia, S.C. – FOX) – was officially termed “inconclusive,” although the retired Sheriff’s Deputy who administered it said that the test showed “no indication” that Marchant was lying.

When he first came forward, we had serious doubts about Marchant’s story given the fact that up until that moment he had been employed by one of Haley’s rivals, S.C. Lt. Gov. Andre Bauer.

However, having spoken with lawmakers and other individuals who attended the 2008 conference in Salt Lake City, we can confirm that Marchant and Haley partied together into the early morning hours of June 15, 2008 at the W Lounge, a dance club located three blocks from the Marriott hotel where they were staying.

We’ve also spoken with a source who claims he chatted with Haley and Marchant at the corner of Broadway and Southwest Temple streets at around 2:25 a.m. as the pair walked “arm-in-arm” back to their hotel room.

Obviously, that doesn’t necessarily prove Marchant’s story, but similar to the text messages and phone logs released by Folks, it does lend plausibility to his original claim.

UPDATE: While we’re on the subject, here’s an interesting read from the Charleston City Paper in which Corey Hutchins – a Columbia, S.C. reporter chasing down the original Haley-Folks affair story for The Free Times – discusses his investigation and acknowledges that a story about the allegation was “virtually set for publication.”