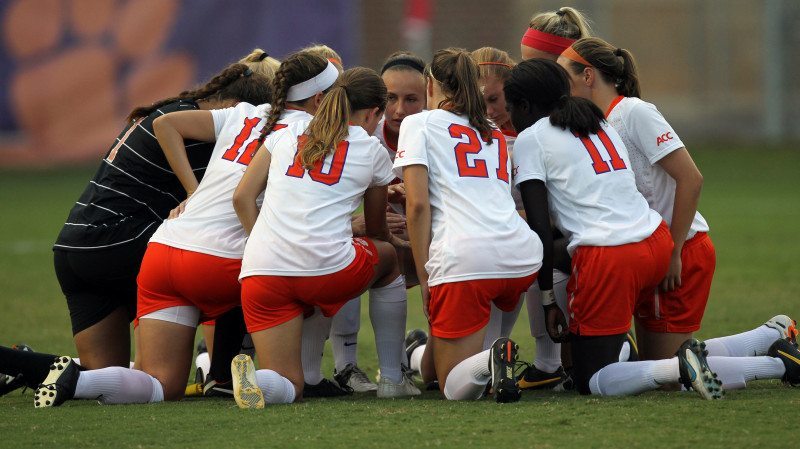 Haley Ellen Hunt, of Aiken, S.C., is suing her former coach – Eddie Radwanski – and several other Clemson coaches, former teammates and school administrators (including former Tigers’ athletics director Terry Don Phillips) as a result of injuries she suffered during an alleged hazing incident.

All the defendants are sued individually and in their capacity as employees of the school.

According to Hunt’s lawsuit – filed by attorney Robert E. Sumner of the Charlotte, N.C.-based Moore VanAllen firm – Coach Radwanski took over the Clemson program in 2011 and attempted to convince Hunt not to attend the school.

Undeterred, Hunt enrolled at Clemson anyway – at which point Radwanski is accused of helping orchestrate a hazing incident that led to her injury.

According to the lawsuit, on the evening of August 18, 2011 Hunt was abducted from her dorm room with two other freshmen soccer players and “forced into and held captive in the rear compartment of an automobile.”  For the next half hour, the players were allegedly driven around Pickens County – and occasionally forced to exit the vehicle and “perform humiliating and demeaning acts.”

Eventually they wound up at Riggs Field, the school’s soccer facility.  There, the players were spun around and disoriented – and then forced to run at full speed.

That’s when, according to the suit, Hunt “took off in a dead sprint running parallel to the field, but no one stopped her.”

Instead her teammates allegedly shouted at her, “commanding that she run faster.”

Hunt did run faster – right into a brick wall near the field.

“The momentum of Ms. Hunt’s collision with the brick wall threw her body backward, causing her to smash into a nearby table and fall to the ground,” the lawsuit states.  “The players heard Ms. Hunt scream and observed her clench her bloody face.  One player described the sound of Ms. Hunt hitting the brick wall as ‘metal hitting metal.’  The impact with the brick wall caused Ms. Hunt to sustain serious injuries to her brain, head, face and hands.  Ms. Hunt was knocked unconscious and had to be physically assisted by other players.”

Hunt was never taken to the hospital.  Campus police were never called.  According to the suit, a Clemson assistant coach – Siri Mullinix – arrived at Riggs Field shortly after the incident occurred and told the players not to tell anyone what happened.

These instructions were allegedly repeated by Coach Radwanski, who held a meeting shortly after the incident took place to inform the players that they were not to discuss what happened with anyone.

According to the lawsuit, Radwanski told the team “we cannot have anybody finding out about this.”

Not only that, when it became clear how serious Hunt’s injuries really were – the coaches are accused of stepping up their hazing of Hunt and telling her “to stop complaining.”

In other words she never received the treatment she should have gotten in the aftermath of such a serious injury.

While no disciplinary action was taken by the school’s athletics department, Clemson’s Office of Community and Ethical Standards (OCES) eventually undertook its own probe of the incident – which resulted in the team being placed on disciplinary probation through December 2012.  Team members were also required to attend a workshop on hazing.

What happened to Hunt?

According to her attorneys, her symptoms worsened last November and she was forced to give up soccer.  Additionally medical tests performed by a neurologist – David R. Wiercisiewski – revealed “substantial decreased cognitive function.”  Hunt’s vision was also permanently damaged as a result of the incident.

FITS has provided Clemson with a copy of the lawsuit.  We did not immediately receive a response, but we’ll let you know as soon as we hear something.

Obviously there are multiple sides to every story, but the narrative told by Hunt’s lawyers certainly strikes us as pretty damning if true …