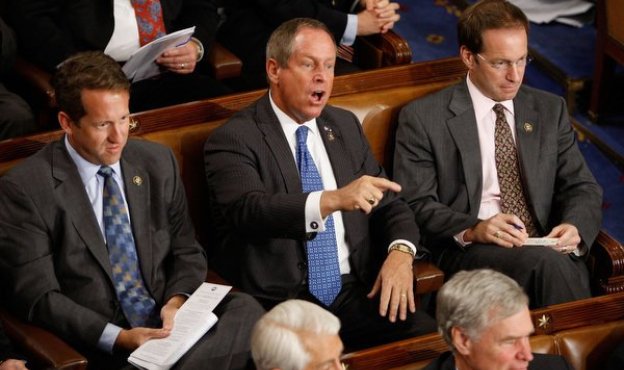 Those two words by Congressman Joe Wilson reverberated across our Nation as a warning four years ago – yet they were ignored. In fact, Congressman Wilson was excoriated for not following proper “protocol” by calling out  “You Lie!” at President Barack Obama during a join address to the U.S. Congress in September 2009.

As often happens, brave men and women who state what is right are not appreciated until time has passed.

Congressman Wilson AND the State of South Carolina endured tremendous ridicule for his statement, but history will make him a hero. At this point, there are millions in America who could care less about protocol when their insurance policies have been cancelled and Obamacare is forcing them into an inferior product at a much higher cost.

At least someone in the media realizes how right Congressman Wilson was.

“Many in America were shocked that anyone would call the President of the United States a liar in such a forum as a presidential address to a joint session of Congress,” columnist Richard Kline wrote recently. “But, now, as we look back on 5 years of Barack Obama, we see that Obama and his Administration do lie. And they lie a lot.”

Congressman Wilson not only warned us that President Obama lied about Obamacare four years ago, he revealed a deeper truth that if someone lies about one thing they will likely lie about another – and that could be indicative of a manipulative personality. We all lie in some way, large or small, but when people in positions of great power lie, we all suffer.

It takes courage to tell the truth, particularly in the midst of strong political forces (as I experienced in my role in state government) but Congressman Wilson did. Not only that, he did so in front of the biggest media audience in America – and no one listened. Now those members of Congress (none of whom were Republicans) who voted for what may become one of the most disastrous lies in American history will have to live with the consequences, along with the American people who are paying for this debacle.

In fact las month a liberal, Doctor Margaret Flowers, co-authored an article called: “Obamacare: The Biggest Insurance Scam in History” and appeared on the liberal Bill Moyers and Company television show to demonstrate how Obamacare follows the trajectory of an insurance scam.

It seems we can all agree on this failure.

I am a proud South Carolinian and have been a Republican all my life, but we need more elected and appointed officials with the courage to stand up and tell the truth no matter the ridicule or the political party. That’s what real America wants.

Therefore, I hereby nominate Congressman Joe Wilson for the first Francis Marion Award for fearless courage in his duty to the State of South Carolina and the Nation.

Barack Obama Has His Finger On The Problem