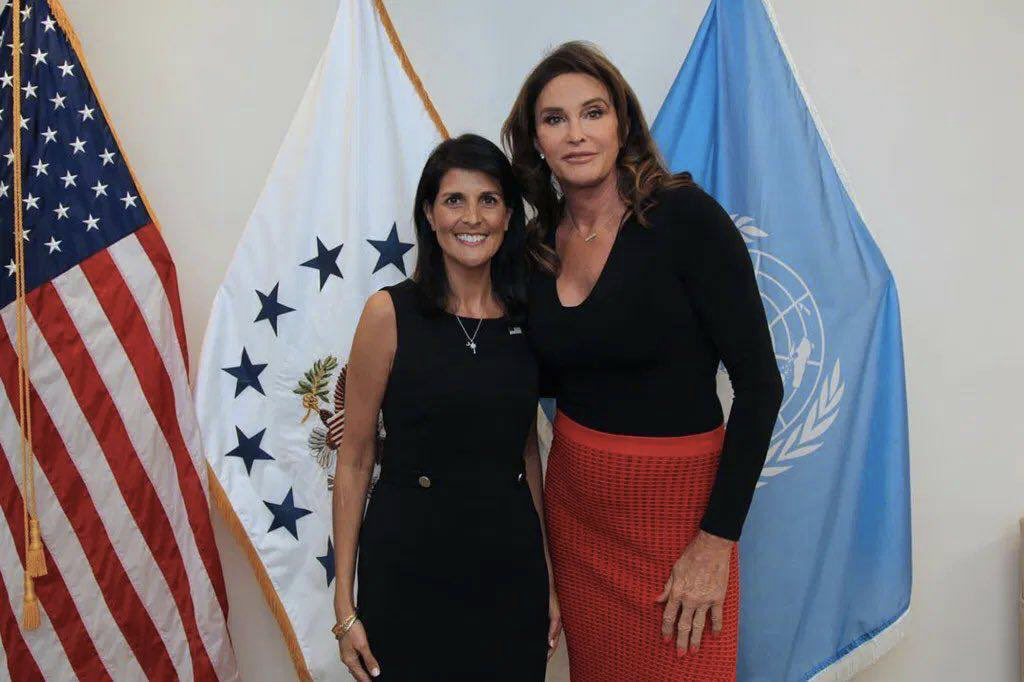 In July of 2017, Caitlyn Jenner paid a visit to the United Nations to discuss lesbian/ gay/ bisexual/ transgender (LGBT) issues with former ambassador Nikki Haley. During her visit, the former male Olympian – arguably the most famous trans person in the world – posed for a picture with Haley.

Since Jenner announcer her intention to run for governor of California in an upcoming recall election against Democratic incumbent Gavin Newsom, the photo of her and Haley – a likely 2024 GOP presidential candidate – has been generating tons of buzz.

None of it particularly good for either politician …

“If you could summarize the downfall of the GOP in one photo what would it look like? And why is it this photo?” the conservative Twitter account RightWingSavages noted, referencing the image of Haley and Jenner.

A floodgate of memes quickly opened related to the photo …

“One of these two will never be president,” one version of the meme noted. “The other is running for governor of California.”


South Carolina Republicans took a break from their ongoing infighting to participate in the “caption contest” fun, too.

“One of these persons is confused as to their true identity. The other is Bruce Jenner,” a GOP official from the Palmetto Upstate told me, taking a clever swipe at Haley’s seemingly interminable political vacillation.

Actor Dean Cain – one of the handful of Hollywood celebrities to support former U.S. president Donald Trump – noted on social media that he, too, was enjoying the Haley-Jenner memes.

“Dang it. I laughed,” Cain tweeted in response to one of the images.

That comment drew a rebuke from the ambassador herself …

“Interesting,” Haley tweeted. “I don’t find it funny. Caitlin (sic) came to see me at the UN and I appreciated her conservative views. I will continue to think that the Republican Party is one of conservative views by all people regardless of the demographics. To me, that’s not funny, its America.”


As I noted earlier this week, Haley’s “many missteps in assessing the mood of the GOP electorate over the last few months” have turned her once-promising presidential bid into a magnet for mockery up and down the ideological spectrum. That’s not surprising, though, seeing as political insiders from the left, middle and right have been pillorying Haley’s transparent opportunism for the better part of the past two years.

In the aftermath of the bloody rioting at the U.S. capitol on January 6, 2021, Haley and other GOP politicians calculated Republican voters would abandon their leader – former U.S. president Donald Trump. That clearly did not happen. In the days that followed, Haley’s strategists realized this – belatedly – and she quickly changed her tune. Several old quotes came back to bite her, though – and when Haley sought an audience with Trump in the hopes of explaining herself, she was rebuffed.

Despite her recent struggles, Haley still has deep neoconservative and Jewish support. That financial backing – along with her status as a minority female – will help keep her in the game. Accordingly, Haley has been auditioning prospective 2024 running mates in Florida – and is scheduled to travel to early-voting Iowa in early summer to plant her flag there.

So she is clearly still running for president – much to the chagrin of the Republican base.

“I would drive railroad spikes through my kneecaps before I would vote for Nikki Haley, the Mitt Romney of John McCains’,” one of the authors at The Conservative Treehouse wrote recently.

As for Jenner, she is finding out the hard way that liberal support for her status as a trans woman is not translating into “tolerance” of her purportedly conservative political views. As soon as she announced her candidacy for governor of California, the left attacked her – zeroing in on her support for Trump in 2016.

“(Jenner) spent years telling the #LGBTQ+ community to trust Donald Trump,” tweeted Equality California, the Sunshine State’s largest LGBT advocacy organization. “We saw how that turned out. Now she wants us to trust her? Hard pass.”

Jenner backed Trump in 2016, but declined to endorse him in 2020 owing to his views on transgender issues.

My news outlet also backed Trump in 2016, but declined to endorse him in 2020 owing to his failure on fiscal issues.

Others were more blunt in expressing their disapproval of Jenner – calling her gubernatorial bid a “vanity campaign.”

“Caitlyn Jenner is a deeply unqualified hack who doesn’t care about anyone but herself,” trans activist Charlotte Clymer wrote.  “Her views are terrible. She is a horrible candidate.”