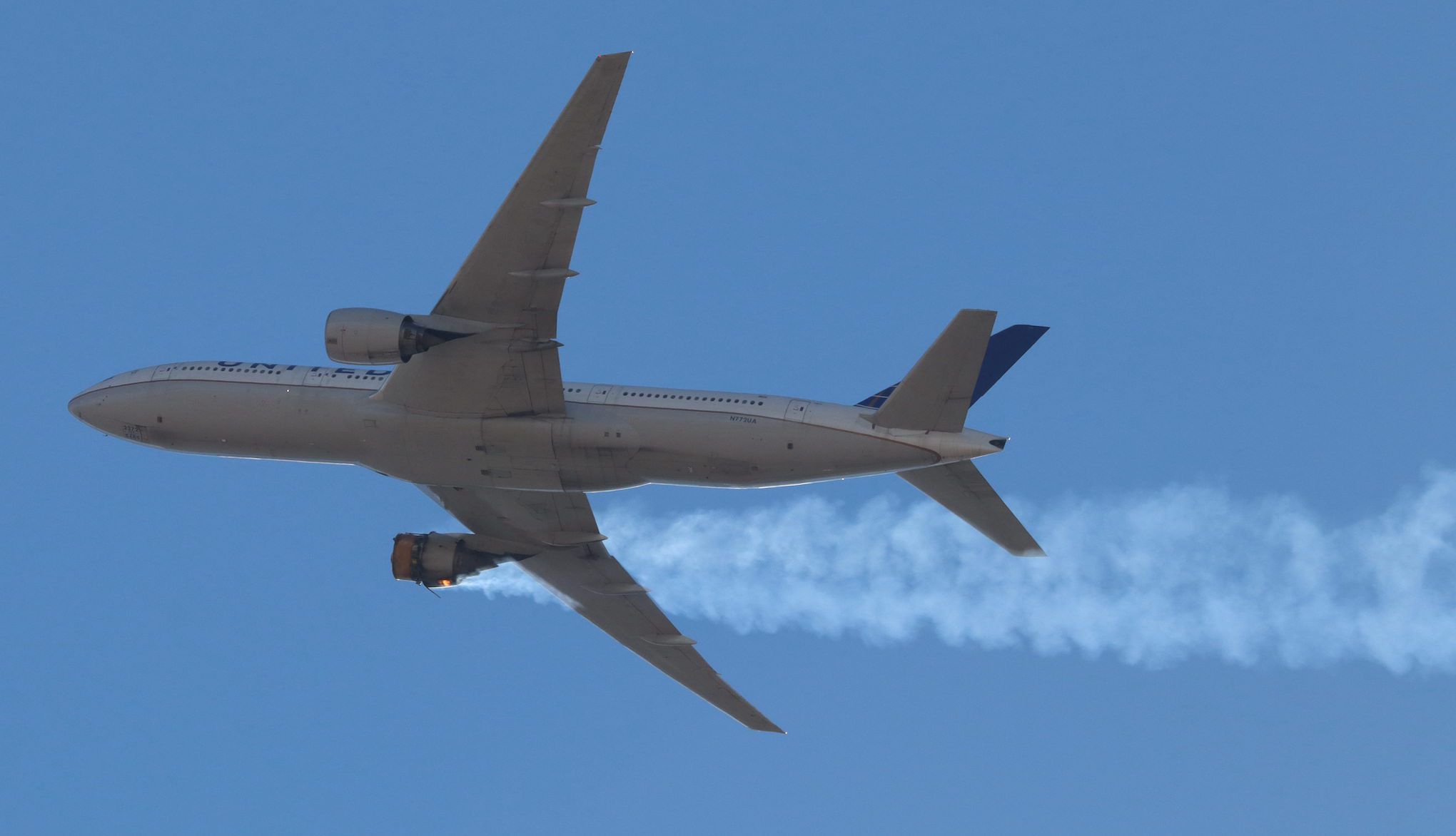 The hits keep-a-coming for crony capitalist aerospace giant Boeing. Less than two months after a federal grounding of its 737 Max commercial jetliner was controversially lifted, nearly 130 of its 777 series commercial jetliners have been grounded by the company following an engine failure in the skies above Colorado.

United Airlines flight 328 – with service from Denver to Honolulu, Hawai’i – experienced an explosion and subsequent conflagration it its right Pratt & Whitney PW4077 engine shortly after takeoff on Saturday.

As horrified passengers looked on, the engine burst into flames and began disintegrating – shedding debris as the aircraft suddenly lost altitude.

Miraculously, all 239 people on board (229 passengers and 10 crew members) survived the explosion as the plane’s pilot was able to maintain control of the jet and return it safely to the airport.

Just as miraculously, no one on the ground was injured due to falling debris … although there were some close calls.

The accident is under investigation by the National Transportation Safety Board (NTSB). Meanwhile, questions over how to inspect similarly equipped planes to ensure their safety moving forward will fall under the purview of the Federal Aviation Administration (FAA).

Luckily for Boeing, the vast majority of its 777s are not equipped with this particular engine – which was involved in a similar incident on a Japan Airlines flight out of Okinawa last December.

The 777 is the largest twin-jet engine in the world, entering service in the mid-1990s. Boeing has delivered more than 1,600 of the jets to customers around the world, but fewer than 200 of them feature the engine involved in Saturday’s incident.

United is the only American carrier using 777s powered by the Pratt & Whitney PW4077. The airline grounded these planes on the recommendation of Boeing, which said the aircraft should remain out of the skies until the FAA “identifies the appropriate inspection protocol.”


Boeing has been reeling in recent months due to the 737 Max debacle and the broader implosion of the air travel industry following societal shutdowns tied to the coronavirus pandemic.

Meanwhile, its “working” jets continue to be plagued by reports of shoddy manufacturing – especially the 787 Dreamliners produced in North Charleston, S.C.

In fact, 787 production has been effectively stalled for the last three months due to a fuselage defect that Boeing has yet to resolve. According to aerospace reporter Dominic Gates of The Seattle Times, the defect “can create gaps that could potentially weaken the structure of the fuselage.”

Not surprisingly, Boeing is hemorrhaging jobs.

Earlier this month, it was revealed the company had shed a total of 1,163 jobs in North Charleston – or 17 percent of its entire workforce in the Palmetto State. Additional job losses are expected, too.

Boeing received more than $1 billion in taxpayer-funded incentives to locate its Dreamliner production facility in North Charleston over a decade ago.

The company recently announced it would consolidate all of its 787 Dreamliner production in South Carolina moving forward, however its sprawling North Charleston campus will still be producing fewer jets per month than it did when sharing production responsibility with Boeing’s main facility in Everett, Washington.

And this assumes the fuselage issue is resolved …

In early trading on Monday, Boeing’s stock tanked on the news of the 777 engine failure – but as of 11:00 a.m. EST it had rebounded.

According to a release from Global Data, Boeing’s rival Airbus – which has historically trailed the Chicago-based company in terms of the business it receives from defense contractors – saw its net orders in this sector climb by 39.2 percent last year, “indicating a strong performance in an historically weaker business segment coming out of the COVID-19 pandemic.”

This news outlet’s founding editor Will Folks staunchly opposed the taxpayer-funded incentives provided to Boeing by state lawmakers – arguing that such crony capitalist deals distorted the market by unfairly shifting the tax burden onto the shoulders of small businesses and individual income earners/ property owners.

Moreover, as this news outlet has extensively documented, such corporate handouts have materially failed to advance employment and raise income levels in the Palmetto State.

Accordingly, the editorial position of this news outlet is to “oppose such giveaways and instead push lawmakers to enact broad-based tax relief targeting the individual citizens and small businesses who are are responsible for the majority of jobs created in our state.”