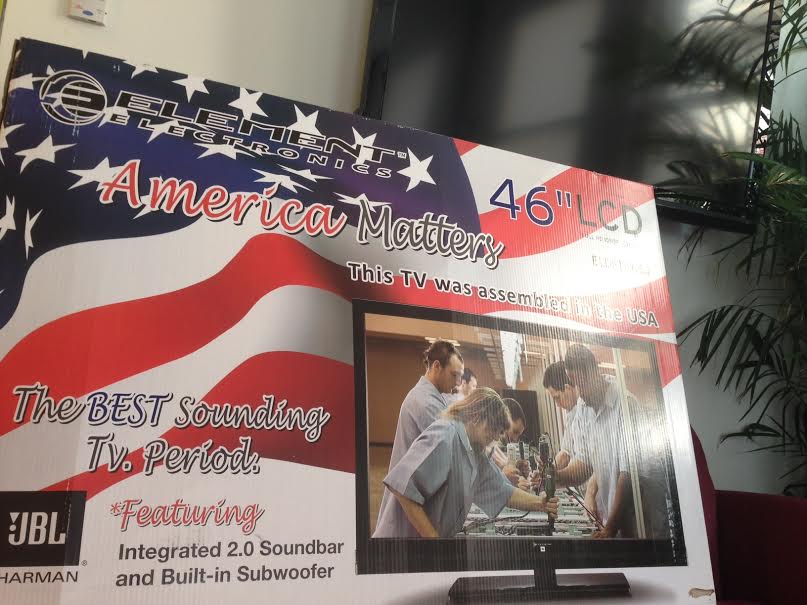 Years ago, this news outlet expressed our opposition to the taxpayer-funded, crony capitalist giveaway South Carolina leaders provided to Minnesota-based Element Electronics. Readers will recall this is the television company which opened a “manufacturing” facility in Fairfield county in 2014 – one that employs between 200-250 workers, we are told.

As we noted at the time, there was a lot wrong with this deal … starting with the fact that former S.C. governor Nikki Haley convinced Element not to locate its facility in Sumter county (where it originally wanted to locate its operations).

Why did Haley do this? So that she could boast of “creating jobs” in all forty-six South Carolina counties ahead of her 2014 reelection campaign (Fairfield was the last county on her list).

Its location drama aside, Element has never come close to hitting its promised target of 500 new jobs. Also, the total amount of taxpayer-funded incentives awarded to this company wound up being more than twice its capital investment.  Element stands to receive nearly $15 million in government subsidies as part of its deal – well above the $7.5 million it claims to have invested in South Carolina.

Element also received a property tax break that wound up shifting the burden even further onto local residents and existing businesses – all part of the ongoing crony capitalist scam that has failed to advance South Carolina’s economy.


Despite receiving all of these unfair advantages, Element threatened to lay off its South Carolina employees in 2018 as a result of tariffs imposed by former U.S. president Donald Trump – prompting S.C. governor Henry McMaster to step in and request a waiver on behalf of the company.

Which, of course, was granted …

The tariff battle exposed a dirty little secret related to Element’s operations, however. According to Elizabeth Brotherton-Burch of the American Alliance for Manufacturing (AAM), the company was “counting on … patriotic goodwill” in the tariff fight given its proclaimed status as “the only major television company assembling TVs in the United States.”

“The problem was that those TVs – which were practically draped in the American flag in their marketing – were in fact still being made in China,” Brotherton-Burch wrote.

“As we first reported in 2014, the television sets arrived at Element’s factory in the United States already packaged in their boxes (and even the boxes were made in China),” Brotherton-Burch continued. “Element’s South Carolina workers took the TVs out of the boxes, checked the screens for scratches, and then used screwdrivers to open the back of each TV and insert a memory board. The TVs went through some mechanical testing, (were) repackaged and sold in stores in boxes with ‘Assembled in the USA’ packaging.”

Oh, and the memory boards are also made in China – making this a definitional “screwdriver” operation. Not to mention a “screw job” for consumers (and the South Carolina taxpayers subsidizing the scam).

In light of AAM’s reporting and the petition it filed against Element with the Federal Trade Commission (FTC), the company was forced to modify its claims … although sources familiar with the company’s current operations tell us nothing about its “production model” has changed.

In fact, we have spoken with sources who have been inside Element’s Winnsboro, S.C. facility as recently as last month who tell us its “screwdriver” manufacturing process remains in place. Specifically, they claim the “mechanical testing” consists entirely of plugging the televisions into an outlet and turning them on … that’s it.

The FTC requires a product undergo a “substantial transformation” on U.S. soil in order to be marketed as “assembled in the USA.”

“What Element Electronics wanted to do – and continues to want to do – is play both ends,” Brotherton-Burch concluded. “It took advantage of Americans’ genuine, admirable desire to buy more American-made products while also remaining heavily dependent on manufacturing in China. It used taxpayer dollars to help fund its South Carolina facility, but it all amounted to nothing more than a PR stunt.”


Of interest? Element’s televisions have been a central part of retail giant Walmart’s ongoing “America At Work” campaign – which boasts of supporting products “made, grown or assembled in America.”

“We believe we can create more American jobs by supporting more American manufacturing,” Walmart noted in promoting its campaign.

Element is not engaged in “American manufacturing,” though … not by any definition we would accept, anyway. Frankly, the whole operation strikes us as little more than a patriotism-exploiting scam … the sort of thing we would expect from a company whose founder was implicated in a $3.7 billion, 14-year Ponzi scheme.

Obviously, this news outlet supports efforts to market and sell American-made products – and efforts by policymakers to expand American-based manufacturing operations (including U.S. facilities operated by foreign corporations). But these efforts must be legitimate … and as we have consistently noted, no “economic development” investment in this country should benefit from unfair, market-distorting taxpayer subsidies.

Instead, policymakers ought to pursue specific economic policies which place a premium on small business growth, entrepreneurship and expanded economic equality for all taxpayers.