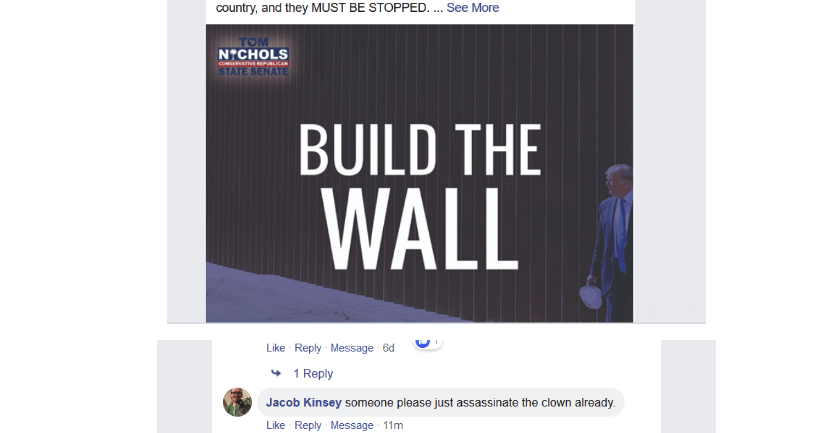 Tom Nichols, a candidate for South Carolina Senate District 16 (map) who calls himself a “straight shooter,” recently reported an allegedly threatening comment made on his Facebook page to authorities.

“Someone please just assassinate this clown already,” Jacob Kinsey wrote on Nichols’ Facebook post, according to his campaign press release.

In his announcement video, Nichols described himself as a “God-fearing, Trump-loving, politically incorrect conservative.

“It is unclear whether Kinsey’s comment referred to President Donald Trump or Nichols,” the press release said.

The Fort Mill Republican’s campaign reported the incident to the South Carolina Law Enforcement Division (SLED) for an investigation, according to the release.

“SLED informed the campaign that they notified the United States Secret Service,” the release said.

In the press release, Nichols’ campaign mentions that the alleged commenter Kinsey is a Bernie Sanders fan. In his statement, Nichols implied that the comment had to do with Kinsey’s “radical liberal” politics.

“It is clear that radical liberals will do anything, even openly advocate for the assassination of political foes, to change the American Dream into a socialist nightmare,” Nichols said.

He said he wasn’t concerned for his safety and “his family and friends know (he) can take care of himself.”

“But this cryptic comment has only strengthened my resolve to protect law abiding citizens’ right to self-defense and to fight for the shared conservative values of York and Lancaster Counties,” he said.

Nichols is up against two other candidates – York county councilman Michael Johnson and Indian Land, S.C. civic leader Mike Neese for the seat this year.

All 170 seats in the S.C. General Assembly (124 House seats and 46 Senate seats) are up for election in 2020 – although as we have frequently pointed out very few of these races wind up being competitive.