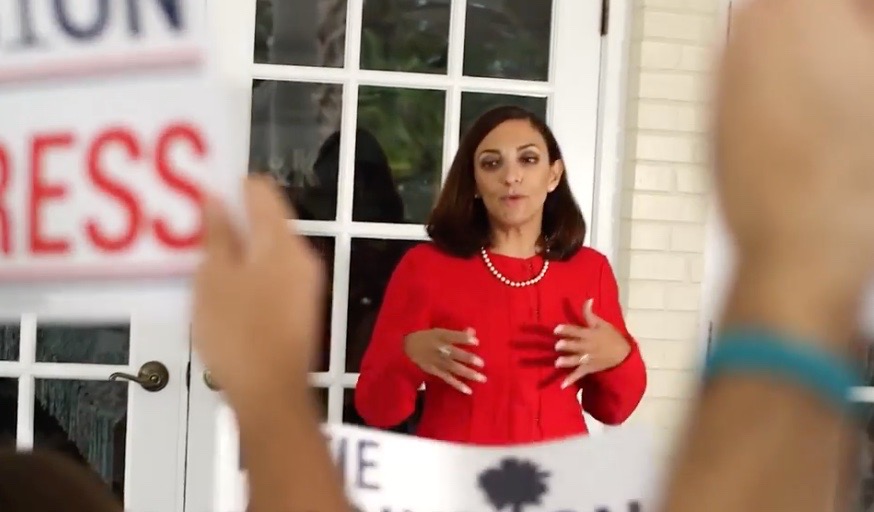 Arrington’s introductory ad – entitled “American Dream” – shares the candidate’s “journey from the graveyard shifts at Denny’s to the briefing rooms of the Pentagon, as well as her strong support of President Donald Trump’s conservative agenda,” according to a news release from her campaign.

Here’s the text of Arrington’s spot …

As a new mom and military wife, I worked the night shift at Denny’s just to make ends meet. Now, I own a business providing cyber security to protect our troops. My name is Katie Arrington. I’ve lived the American Dream – the same American Dream Donald Trump was elected to restore. But too many Washington politicians only want to attack our President. I am not a politician; I am a mother and small business owner. And, I am running for Congress to help pass President Trump’s bold, conservative agenda.

And here’s the ad itself …

According to Arrington’s campaign, her spot is “running district wide, in both the Charleston and Savannah markets.”

Arrington’s focus on advancing the Trump agenda is not surprising given Sanford’s reflexive #NeverTrumpism.

Having said that, we believe the most compelling aspect of her candidacy is the contrast she is drawing between her citizen leadership and Sanford’s status as a career politician.

Why is this so compelling?  Because as we’ve repeatedly pointed out, Sanford has become the career politician he used to criticize, one reason he has been struggling of late with voters (and donors).

“Conservatives from Summerville to Hilton Head, Mount Pleasant to Moncks Corner are joining our campaign daily because they know it is time for a true public servant to represent them in Congress,” Arrington said. “I am excited to share more of my story in achieving the American Dream and my support of President Trump in this ad, and I am optimistic other conservative neighbors will join the Katie Arrington for Congress team.”

Got something you’d like to say in response to one of our stories? Please feel free to submit your own guest column or letter to the editor via-email HERE. Got a tip for us? CLICK HERE. Got a technical question or a glitch to report? CLICK HERE. Want to support what we’re doing? SUBSCRIBE HERE.
Banner: VoteArrington.com