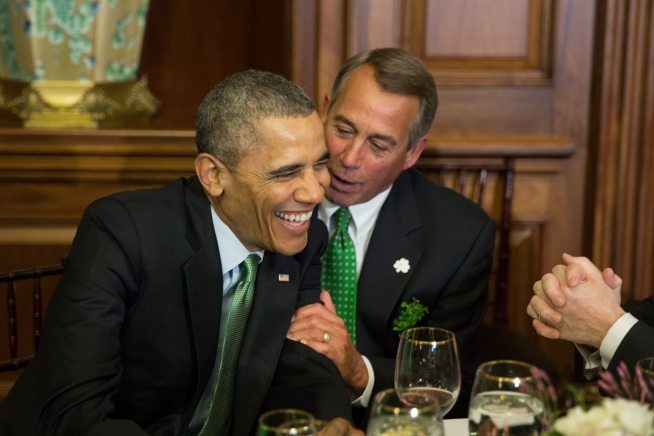 Rather than the House having a real discussion about spending priorities as the framers of the Constitution intended, President Obama and the Speaker created a closed-door deal that ends the only effective constraint on government growth to come out of the past four years.

The deal increases the debt limit, adds $80 billion in new spending (which it promises to pay back in a decade), cuts the crop insurance program, sells some of our strategic petroleum reserve and raids the Social Security retirement benefits program to bolster the flailing Disability Insurance Program.

Hardly the result that voters expected after Republicans asked for their trust in 2010.  We proudly decried autocratic government in “A Pledge to America,” writing:

An unchecked executive, a compliant legislature, and an overreaching judiciary have combined to thwart the will of the people and overturn their votes and their values, striking down long-standing laws and institutions and scorning the deepest beliefs of the American people.

An arrogant and out-of-touch government of self-appointed elites makes decisions, issues mandates, and enacts laws without accepting or requesting the input of the many.

We must end the era of crisis-driven spending bills in which President Obama’s agenda gets funded, the debt ceiling leaps higher and the House of Representatives votes on the final bill without holding a single hearing on the legislation.

This process is far from what the Founders intended and makes a mockery of the House’s Article One “power of the purse” authority.

The process stinks, because the House allows it to stink …

Ken Buck is a former prosecutor who represents Colorado’s 4th Congressional District in the United States Congress.  His column – reprinted with permission – originally appeared in The Washington Examiner.

Mueller Time: Swing And A Miss

well the freedom caucus’s little gonads are clipped and put in a jar for the next 2 years, now if tarnation and squishy could get a little trim, maybe they would settle down and quit peeing on the floor.

I don’t think those two are interested in trim. They aren’t called Tea Baggers for nothing.

trimming of the gonads, sorry about the ambiguity.

i think they will think twice about that, Hillary already removed their left nut, they only have one left

That’s not the mantra . Prepare for stupidity.

Is it true that Dick Cheny didn’t have a heart,like in The Wizard Of Oz ?

well when you shoot your friend in the face in a hunting accident and declare it was his fault for putting his face in the line of fire, does support that theory.

Dick is the Dick. Karma will be a thought.

He’s so special he got a new one.

So quit your bitching write a budget Buck that can pass the House, the Senate and the President.

Ryan’s, “The Process Stinks.” comment is for cover and designed to give the appearance of displeasure to the Freedom Caucus and their dimwitted followers. Passing this bill is just one of those conditions that Ryan demanded before taking the position. The joke is on you, Mr. Buck.

Such an approach worked for over two hundred years. Now it is impossible to have a thoughtful, realistic, and sensible discussion on the budget when one party is held prisoner by elements that refuse to be thoughtful, realistic and sensible. The system always was “give-and-take.” Never all “take.” It was neither Obama nor Boehner who undermined the budget process. It was a minority of Republicans who believe their interests (and political ambitions) should trump the interests of the United States.

Under Obama the deficit is going down, employment is up, and the stock market has skyrocketed. Dam good job. The little people in the House of Representatives have done nothing that could possibly compare to Obama ‘s achievements. Big cry babies those Republicans.