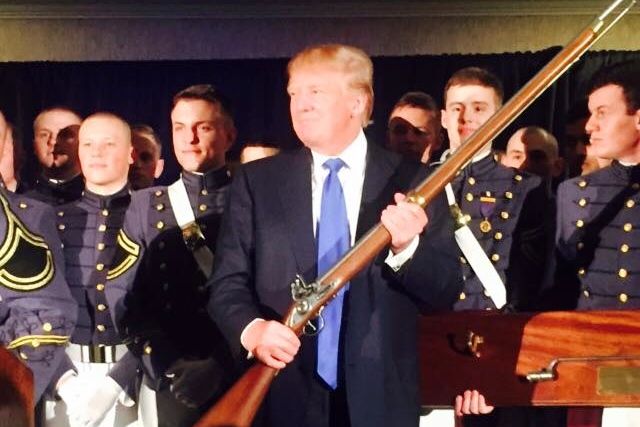 || By FITSNEWS || GOP presidential frontrunner Donald Trump affirmed his unambiguous support for the Second Amendment to the U.S. Constitution this week.

“The Second Amendment to our Constitution is clear,” Trump said. “The right of the people to keep and bear Arms shall not be infringed upon. Period.”

Nice … that’s definitely a refreshing counter-narrative to the nonsense being spewed from the other end of the political spectrum.

“The Second Amendment guarantees a fundamental right that belongs to all law-abiding Americans,” Trump added.  “The Constitution doesn’t create that right – it ensures that the government can’t take it away. Our Founding Fathers knew, and our Supreme Court has upheld, that the Second Amendment’s purpose is to guarantee our right to defend ourselves and our families. This is about self-defense, plain and simple.”

Trump’s Second Amendment agenda includes a repudiation of weapon bans – which he refers to as a “total failure” – and reforms to the nation’s inefficient background check system.  He also supports a national “right-to-carry” law and the right of U.S. military personnel to carry weapons on bases.

Trump did say the nation needs to “expand treatment programs” related to mental health, arguing that “red flags” have been ignored prior to the perpetration of many recent mass murders.

“We need to get them off the street before they can terrorize our communities,” Trump said.  “This is just common sense.”

To read all of Trump’s Second Amendment proposals, click here.

This website has been consistent in its Second Amendment views: We will continue to call out the uber-liberal “gun grabbers” while at the same time urging civil disobedience of any law (federal, state or local) which infringes upon the constitutionally guaranteed right to bear arms.