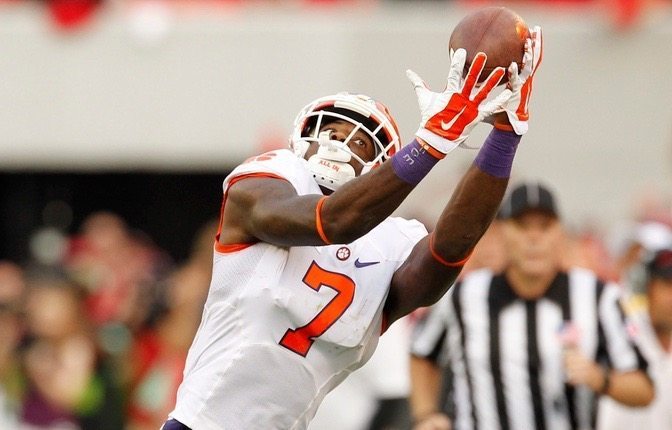 || By FITSNEWS || On the one hand, Mike Williams can move his arms. And his legs.  Which is good news …

The bad news?  The junior wide receiver for Clemson University’s twelfth-ranked football team won’t be on the field anytime in the near future – depriving the Tigers of one of their most potent offensive weapons.

Williams’ slammed into the goal post in the east end zone after making a leaping touchdown catch during the first quarter of the Tigers (1-0, 0-0 ACC) 49-10 victory over Wofford.  According to Clemson head coach Dabo Swinney, he sustained a “small fracture” to the neck.

“We received the results from the MRI and he has a small fracture,” said Swinney.  “Mike is doing well, he can walk and will be at class tomorrow.  He will wear a brace and will be reevaluated again in about six weeks.  I can’t say how long he will be out.  He might not be able to play the rest of this year. We will just have to see how it heals.”

Williams’ catch was originally ruled an incomplete pass out of bounds – but replays clearly showed him touching down in bounds prior to careening into the padded goal post neck-first.  He waved to the 81,000-plus fans in attendance as he was carted off the field by Clemson trainers.

“We are very thankful that the overall prognosis is good that he will be able to play again at some point,” Swinney added.  “I can’t say enough about our medical staff.  They did a great job through the entire process.”

“Mike is hard to replace because of his experience and his talent,” Swinney said. “But we cross train receivers and it will give other talented players an opportunity.”

In fact one of those “other talented players” – true freshman wide receiver Ray Ray McCloud – hauled in eight passes for 80 yards in making his collegiate debut against Wofford.

Clemson hosts Appalachian State of the Sun Belt Conference next Saturday (September 12) at 12:30 p.m. EDT.  Five days later the Tigers make their first road trip of the 2015 season when they travel to Louisville, Kentucky for a Thursday night game against the Louisville Cardinals.

Some Love For Skai Moore