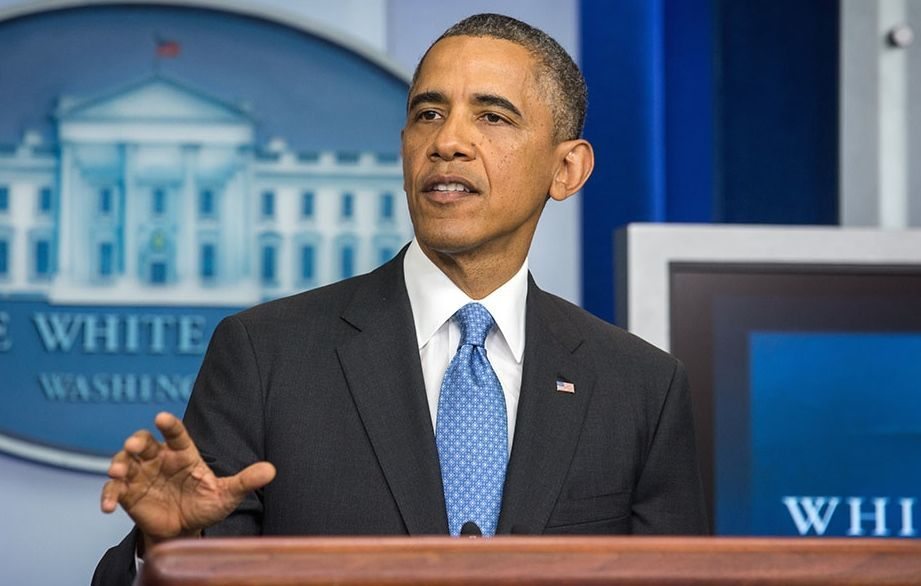 || By FITSNEWS || U.S. president Barack Obama is assailing critics of his administration’s nuclear deal with Iran.

“I know it’s easy to play on people’s fears, to magnify threats … but none of these arguments hold up,” Obama said during an address at American University.

Really?  All we know is Iran’s ruler – Hassan Rouhani – referred to the deal Obama negotiated as an “answered prayer.”  That can’t be good.

More to the point: In the same speech Obama blasted critics for “playing on people’s fears,” he engaged in … wait for it … the exact same fearmongering.

“Let’s not mince words,” Obama said.  “The choice we face is ultimately between diplomacy or some form of war.  Maybe not tomorrow, maybe not three months from now, but soon.”

Obama’s nuclear deal with Iran has been broadly pilloried by the full spectrum of “Republican” presidential candidates … and conservative leaders.  It’s also been blasted by Israel, which continues to rely heavily on U.S. taxpayers to subsidize its war machine.

As noted, this website has never bought into the Iran scaremongering – no matter its origin.  Nor do we especially give a damn what happens to Israel – a nation which continues to bark orders at the United States (as it remains dependent upon American taxpayers).

“We can’t afford to intervene all over the planet,” we wrote back in July when Obama concluded his deal.  “And even if we could, such intervention isn’t making us safer.”

Egg Prices Are Getting Scary

” All we know is Iran’s ruler – Hassan Rouhani – referred to the deal Obama negotiated as an “answered prayer.” That can’t be good.”

Why not? Maybe he wants peace too.

I don’t know, this write up seems to have some tortured logic to it.

What if America is the one that doesn’t want peace?

No, no, that couldn’t be it. Forget I said anything.

Reminds me of a joke I heard James Gregory say one time when he said someone asked him what did he think of the Middle East Position;
“Well, I liked it pretty good but it hurt my wife’s back”
Now passed off to the master himself: “Shifty Henry”

You call that fearmongering? Now, this is fearmongering: http://cannonfire.blogspot.com/2015/08/spycrosoft.html

I use a Ubuntu laptop for certain things, & still yet another one that’s completely offline and NEVER connected to the internets.

““Let’s not mince words,” Obama said. “The choice we face is ultimately between diplomacy or some form of war. Maybe not tomorrow, maybe not three months from now, but soon.”

So obviously the answer is to give them nuclear weapons capability, $150B to fund global terrorism, lifting of the sanctions, ICBM technology and no way for the US to be involved in any “inspections” process. Grreeeaaatt deal there, Barry. Funny that the only people talking about “war” are the utter fools trying to pass this “arrangement” (as Obummer referred to it today) off as something good for the US and its allies. It’s a false choice and now even some Dimmocrats are bailing on supporting this horrible “deal.”

Except that – they don’t get nuclear weapons, and US and European allies are deeply involved in the inspection process, the ICBM technology you refer to they already acquired, and the $150B is more likely to be spent on their economy, not international terrorism. But other than that, there’s gotta be something you said that was true. If we could just find it. Oh, right, Great Deal. I think so too.

You really don’t know anything about this deal, do you? Because you must have missed the part where Iran has banned US inspectors from the inspections process. ICYMI: http://hosted.ap.org/dynamic/stories/I/IRAN_NUCLEAR_INSPECTORS?SITE=AP&SECTION=HOME&TEMPLATE=DEFAULT&CTIME=2015-07-30-12-26-06

And if you really believe that the world’s leading state sponsor of terrorism will not take that $150B to sponsor more terrorism, then you’re as hopelessly naive as the fools who struck this great “deal.”

I’m somewhat perplexed by the GOP argument. So Obama was elected, and he increased sanctions on Iran to get them to negotiate. Iran moderated after 2012 elections, and came to the table, negotiated away their nuclear weapons program, and so here we are. The GOP argument is – what we need is tough sanctions, that will bring them to the table to negotiate away their nuclear weapons program. So…..essentially then, the GOP has been in a coma for what – like five years?

A lot longer than that.

Talk about people in a coma…the utter naiveté of you two is frightening. It truly is. Neither one of you has a shred of a clue of which you speak about Iran. Just sheer total ignorance. Iran has NEVER negotiated away their nuclear weapons program and in fact spent years frustrating and denying would-be inspectors from verifying what exactly they were up to. And now we find out in this “deal” that Iran has banned US inspectors from entering the country, plus the fact they will not produce any document of what they have done in the past. Brilliant deal. So Iran has “moderated” eh? Was that before or after their leaders chanted “Death to America” the other day?

And Jack – why don’t you point out in your wisdom what exactly has Iran done that would engender any sane-thinking people into trusting them?

China is much more a threat, so beat the drums to fight Iran, only one reason, Isreal.

If you like your plan you can keep your plan.

And that’s the key. They don’t anybody to read it because they know it is bad for America. Barry wasn’t lying when he said he would “stand with the Muslims.”

I love my plan and kept my plan! AND our group health premiums had the smallest annual increase percentage-wise in 10 years. Thank you, President Obama!

Too bad it didn’t work out that way for everyone but then again you didn’t get that $2,500.00 annual saving either I see.

I got increased benefits too! Thank you President Obama!

Increased benefits at an increased cost not a $2,500.00 annual savings.

And no denial for pre-existing conditions and for so many added benefits and savings! Thank you, President Obama! You’ve done an incredible job. Thanks for making the freeloaders take out coverage so I do not have to pay for them in the emergency room – although apparently lots of folks on this site LOVE being freeloaders. Thanks, President Obama – you’ve done so many incredible things for our country and apparently not finished yet. Just ignore the haters – they were hating before you ever stepped foot in the White House – and once you did their Obama Derangement Syndrome went through the roof. Thanks for all of the wonderful things that you’ve done for our country and continue to do. So wonderful so see a real man take charge and actually do something. Thank you, President Obama!

Be cautious of idol worship, it effects critical thinking.

LOL Now idcyym I do like you but I am not going to worship you – hope that does not hurt your feelings . . .

LOL NOPE Worked in the private sector my entire life. Next.

Let me ask everyone – who’s fighting ISIS on the ground? A) Israel B) Egypt C) Cuba D) Iran

Why is Bama afraid to mention the Israeli vast nuclear armory? That would make his case. Over 500 nuclear bombs, yet they are afraid of little ole Iran. It’s a dishonest discussion supported by the news media complicity in this deception. Today is the anniversary of the fascist USA nuclear war against Japanese civilians. We seem to relish murdering the innocents; i.e. Vietnam, Korea, Iraq, etc. That Americans still today make jest of, like punk-ass Harry Truman often did.

I’m delighted to see the President of the United States finally calling out the GOP for exactly what they are. Traitors. My respect for my Commander In Chief grows as his confidence in his moral righteousness grows. Thank you Mr.President.