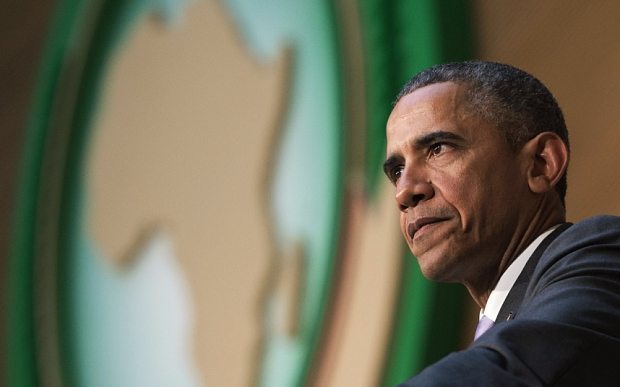 IT’S ALL GOOD IN THE (AMERICAN) HOOD …

He also things he could win again – if he were permitted to seek a third term.

“Now, let me be honest with you,” Obama said during a speech to the African Union. “I am in my second term. It has been an extraordinary privilege for me to serve as the President of the United States. I cannot imagine a greater honor or a more interesting job. I love my work. But under our Constitution, I cannot run again.”

Wait … since when has the Constitution ever been an impediment to Obama doing whatever the hell he wants?

“I actually think I’m a pretty good president,” Obama continued. “I think if I ran, I could win. But I can’t. So there’s a lot that I’d like to do to keep America moving, but the law is the law.”

Again: When has the law ever stopped Obama?

In October 2008, this website declared former president George W. Bush the worst to ever hold the office.

From our rebuke of Bush’s administration …

Bush is just dumb, people, and he’s dumb without anything redeeming attached to it.

In addition to his stupidity, Bush is also (here’s our real beef) the chief betrayer of fiscal conservatism in the 21st Century, a “moderate” Republican who refused to reign in the big government excesses of his own party. That failure ultimately cost the GOP both of its Congressional majorities as well as the faith of the American taxpayers.

And is if that legacy wasn’t enough, Bush stuck a final knife into the heart of capitalism with his $700 billion bailout proposal, a crass, callous and unconstitutional reversion to socialism intended to “rescue” us from the failed government policies his administration either wasn’t smart enough or (in the case of the sub-prime mess) strong enough to correct.

Well Obama has taken Bush’s failed (and hypocritical) big government approach to everything and put it on steroids … with predictable results.

Whereas Bush was a “default setting” statist, Obama has aggressively expanded statism in America – and done so at an incalculable cost to our liberty, our prosperity and our constitutional form of government.

Whereas Bush was blindly “going along to get along” with the Washington establishment … Obama is dangerously and deliberately expanding it, using it as a weapon to attack everything which once made America great.

In other words, come October of next year we’ll be updating our “worst president ever” rankings to reflect a change at the top.