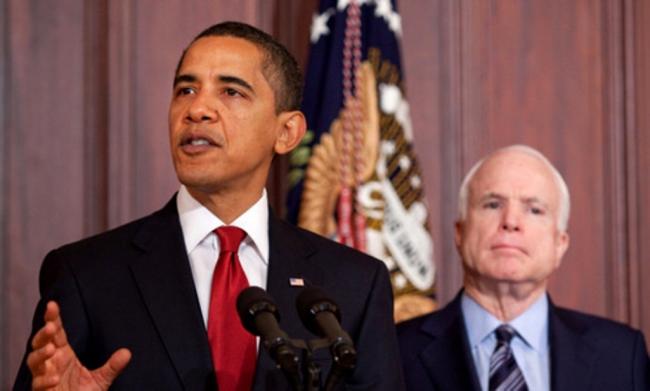 || By FITSNEWS ||  With America’s military-industrial propagandists having successfully fearmongered up a new war, it makes sense that the elder scaremonger – former “Republican” presidential nominee John McCain – is running for another term in the U.S. Senate.

McCain, dubbed “McWrong” by this website, made it official this week.

“Our nation faces unprecedented national security threats from abroad and major challenges at home, and how we act in the next few years may determine the fate of our great country,” he said.  “I know that America needs strong, experienced leadership now more than ever, at this critical point in our history.”

How on earth, then, are we still facing “unprecedented national security threats?”

Seriously, what in the hell did we spend all that money for?

And in prosecuting this “War on Terror,” didn’t McCain propose weaponizing many of the same terrorist groups our country is now supposed to be fighting?

“You can’t argue with someone like John McCain on foreign policy,” we wrote last year.  “Why not? Because the answer is always going to be more intervention and more weapons (a.k.a. more blood and more money). And when that fails – as such approaches have invariably failed – the answer is always to double down on the same failed approach.”

The only thing less successful than McCain’s warmongering?  His 2008 presidential campaign.

Seriously … is it too much to wish this guy would hurry up and die?

Because supporting his reelection campaign is the same thing as wishing death on thousands of U.S. troops … to say nothing of the American citizens endangered by his perpetual, reckless interventionism.

Joe Biden’s Approval Rating Is In The Toilet

Isn’t he going to be primaried?

If you chronicle FITS flip on McCain (for him, before he was against him) it’s about the time McCain DID NOT pick Damaged-goods Sanford as his running-mate…(they knew Sanford had baggage from the vetting process)….

And they could not have two left-leaning liberal-tarians on the ticket…so they picked Palin, and then, like the Dumb@$$#$ liberal-tarians are…they began trashing her…while sucking off Obama…

Wonder why the GOP got beaten by the worst president since Carter, twice?… Thank FITS, Sanford, McCain and the Liberal-Tarians…

Can’t even spell “damn” but love “sucking off.” What’s up with that?

You notice that the most immature minds don’t GET ANY logical analogy…but you are always set off by any would-be sexual language…Very childish, and a testament to your intellectual level, no doubt…LMAO…

No wonder you are the same person, posting under different names…You embarrass yourself under one moniker…and you must adopt another to save face….LMAO…

Wrong McCain has a better ring to it.

McCain and his trained monkey, Grahamnasty, ( I would like to see Arial do a cartoon to that effect.) have enough backing from the MIC that no one can realistically challenge them. As witnessed by the 2014 SC campaign. Fox News was told to not let any of his challengers appear and none did. Several of the talking heads wanted to support other candidates but were told not to. Term limits are the only thing that will ever work in these cases but will never happen. A turd will always be a turd whether red or blue.

And I-Lie-Joe-Wilson will keep stabbing conservatives by voting for RINO Boehner
So long as he can depend on getting re-elected by LEMMING non-complainers !!!