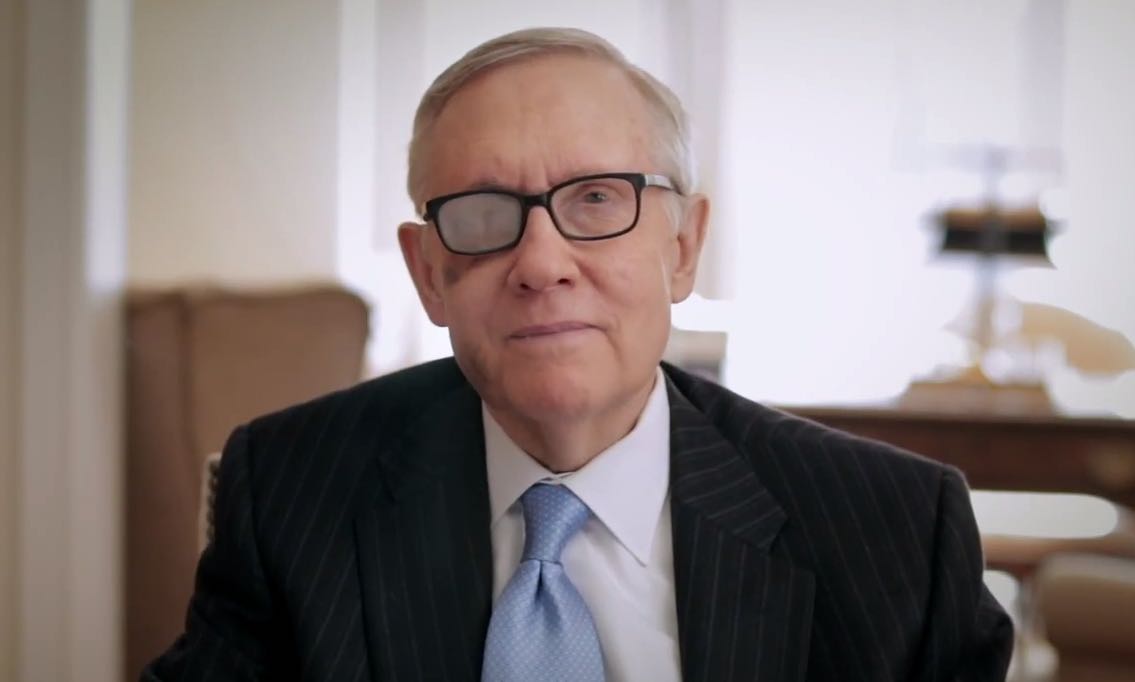 LIBERAL LEADER HANGING IT UP …

|| By FITSNEWS || Liberal Washington, D.C. leader Harry Reid will not seek reelection to the U.S. Senate in 2016 – meaning Democrats will have a new leader in the U.S. Senate come 2017.

“Republicans” rejoiced at Reid’s announcement … apparently neglecting to realize their leaders are no better.  Worse, even.

Seriously … at least Reid was typically honest about being a corrupt and shameless supporter of bigger, more intrusive government. And at least those were precepts rooted in his party’s platform.

Can John Boehner say the same?   No … yet he bends over for the administration of Barack Obama every bit as willingly as Reid did.

Anyway … we’re glad to see Reid go.  In addition to the damage he did at the national level, he was a costly thorn in the side of South Carolinians on the Yucca Mountain issue (a.k.a. the place our taxpayers disproportionately sent hundreds of millions of dollars as part of a plan to dispose of toxic nuclear waste).

But please … let’s not pretend any of these “leaders” are any different.

Reid announced his intention to retire four months after “Republicans” won control of the U.S. Senate (for whatever that’s been worth), and two-and-a-half months after he suffered an “exercise accident” at his home in Las Vegas.

U.S. Senator Charles Schumer of New York is likely to follow Reid as the Senate’s “minority” leader, although again – we caution anyone from presuming any of this makes an iota of difference in the ideological direction of the country.

I wish we could move the election to tomorrow. We need to DUMP the trash and begin to heal this country…It’s F*#ked up…and will be until we get ALL of the Democrats out of power…

Yeah, or could just be their age. If I’m 75 (both are) – I’m going to retire. Heck, Sarah Palin retired in her 40s. Guess she was a casualty of the horrible Bush presidency and McCain campaign.

Cindy Sheehan was tossed out like trash after y’all used her up. Now the media loves the corpses of soldiers under Obama…

You’re a corrupt, ignoble and dishonest Bag of $#!t…and unless you’re the biggest idiot on earth, you know it…

And what about that Representative from Illinois that resigned this week? Was he a Democrat? Can’t remember. Do you remember? Oh, BTW – you keep calling me a bag of shit. I’m not the one living in Crapville, throwing turds around like a chimp and covering my eyes with Fox Fecal Matter while talking about gay sex. That my not-so-close friend, would be you. So please, STFU!!!! But you know what, you can be a stupid as you want, because what that accomplishes is you look stupid. And that is priceless.

I have no idea who you’re talking about. But he is likely taking personsl responsibility for his actions…

You disgusting for lying about who you are and the damage you’ve done….

Reid leaves having passed ACA for Obama that has helped 12 million get insurance, and TARP for Bush, which helped save the financial system. Why do you hate Bush so much?

Including insurance for Cruz’s family. He has also prevented Republicans from killing Medicare and Medicaid, which means GT still has health care thanks to Reid. GT why do you hate Cruz and your family so much.

Yeah, no doubt Reid has done a lot for Limp Tango. Even Viagra is probably covered under his Reid coverage plan. Then again, GT thinks Haley is a great success – so funny.

Notice he how runs away again. God he’s such a coward.

A man was in a long line at the Walmart, and as he got to the register he realized he had forgotten to get condoms, so he asked the checkout girl if she could have some brought up to the register.

She asked, “What size condoms?” The customer replied that he didn’t know.

She asked him to drop his pants. He did, she reached over the counter, grabbed hold of him and called over the
intercom, “One box of large condoms, Register 5.”

The next man in line thought this was interesting, and like most of us, was up for a cheap thrill. When he got to
the register, he told the checker that he too had forgotten to get condoms, and asked if she could have some brought to the register for him. She asked him what size, and he stated that he didn’t know.

She asked him to drop his pants. He did, she gave him a quick feel, picked up the intercom and said, “One box
of medium-sized condoms, Register 5.”

A few customers back was this teenage boy. He thought what he had seen was way too cool. He had never had any type of sexual contact with a live female so he thought this was his chance. When he got to the register he told the checker he needed some condoms. She asked him what size and he said he didn’t know.

She asked him to drop his pants and he did. She reached over the counter, gave him one quick squeeze, then picked up the intercom and said…

Right, cause you have your head in the sand when it comes to the “R’s”

another one bites the dust –

You PROVE my point. This man owned up and RESIGNED, it looks like…

I’m more concerned w/ people who are guilty, but still are allowed to gobble government freebies and impose their will on us innocent taxpayers, who follow the law…..

Have the election tomorrow? I’m all in!!

Arrrrr! Deckhand Harry sails off into the sunset to avoid walking the plank.

Like most liberal men, his wife kicked his ass and he did what he was told.

So you’re saying all wifebeaters are Republicans?

Just the ones he won’t mention at least.

No, he is saying that most democrats are p. whipped, NOW.

Could be. But end of the story – Chuck takes over – and he plays a lot tougher. And all the Jews in NYC and Miami line up behind him.

Some tourists in the Museum of Natural History are marveling at some
dinosaur bones. One of them asks the man in a suit standing nearby.
“Excuse us, please, but do you work here and can you tell us how
old the dinosaur bones are?”

The man replies, “No, I am Senator Harry Reid and I don’t work here, but
I do know their age. They are 3 million, thirty-two years, two months,
and twenty-seven days old.”

“That’s an awfully exact number,” says the tourist. “How do you know their
age so precisely?”

Senator Reid answers, “Well, the dinosaur bones were three million years old when I came to Washington and started working in the Congress, and that was thirty-two years, two months, and twenty-seven days ago.”

He’s going to pursue his dream of being a Bond villian.

There’s a mental image I could’ve done without…

Now cut that out..!!
———————–
Harry: “Shall we try swapping positions tonight?”
Nancy: “That’s a good idea! You stand by the ironing board while I
sit on the sofa and snore.”

I’ve heard this one once before, but “snore” was replaced with “fart”.

I’ll pass on that one.

Not going to happen, I believe he prefers young boys.

Sorry, you have me mistaken for your old man. I realize that I was likely around your mom as much as he was.

“Sorry, you have me mistaken for your old man.”
Sorry not mistaken you for anyone but exactly who you are – and you know it.

Too many of these geezers stay too long. McCain and Reid are prime examples.

We can certainly agree on that.

Right! Schemer is not better, much worse.

TBG was on the elevator when this beautiful woman with a low cut top and REALLY BIG BOOBS got on. TBG was staring at her boobs when she said…

Is that what happened to Reid’s face?

He’s had several “exercise accidents”. But I don’t see how you get raccoon eyes from “falling while jogging”. I think he’s in with a violent crowd.

Reid is the third Democrat of the Class III U.S. Senators who have announced they will not seek re-election, the other two are Barbara Boxer (CA) and Barbara Mikulski (MD).

Reid a former boxer has now experienced a “political KO” with this decision.

The Nevada mafia beat his ass.