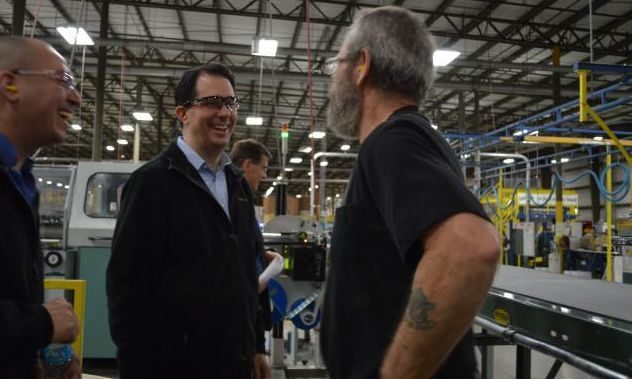 || By RICK MANNING || The Washington Post recently published a front-page article entitled “(Scott) Walker’s anti-union law has labor reeling in Wisconsin” that should be must reading for every Republican governor in the nation.

It is significant not because of the bleating and plaintive cries of those union leaders who are trying to organize in the face of public employees having a choice of whether to send dues in or not. No, it is significant because these union leaders have discovered that once their members are no longer compelled to pay for their services, they choose to spend their money in different, more personally relevant ways.

The Post reports that, “The state branch of the National Education Association [NEA], once 100,000 strong, has seen its membership drop by a third. The American Federation of Teachers, which organized in the college system, saw a 50 percent decline. The 70,000-person membership in the state employees union has fallen by 70 percent.”
When the totals are added up, in the Wisconsin NEA and the state employees union alone, 83,000 former union members, or 48 percent of the membership, have chosen to opt out when given the choice.

The situation has gotten so dire for the state American Federation of State, County and Municipal Employees (AFSCME) affiliate that they have instituted a significant cut in dues payments in an attempt to make their product more attractive to those who have rejected it.

The Post follows with their analysis of the political impact of the choice, writing, “The decline is politically significant in Wisconsin, a presidential battleground where the unions have played a central role in Democrats’ get-out-the-vote drives.”

But even in their attempt to equate the consequences to the political situation, the Post misses the most important point of all. In 2014 alone, AFSCME made almost $91 million in campaign contributions nationwide, with 99 percent of those contributions going to Democrats or left-leaning candidates according to OpenSecrets.org.

That number would have likely been even higher if not for the loss of 49,000 members in Wisconsin, which costs AFSCME as much as $7.3 million each year based upon the standard AFSCME $12.45 per capita rate for full-time employees.

The question for the Republican governors of the 20 states, other than Wisconsin, which are controlled by Republican state legislatures, is why they haven’t enacted similar changes in their states?

Rick Manning is president of Americans for Limited Government.  Follow him on Twitter @RManning957.  This piece (reprinted with permission) originally appeared on The Hill.

“If You See A Terrorist … Say Something”