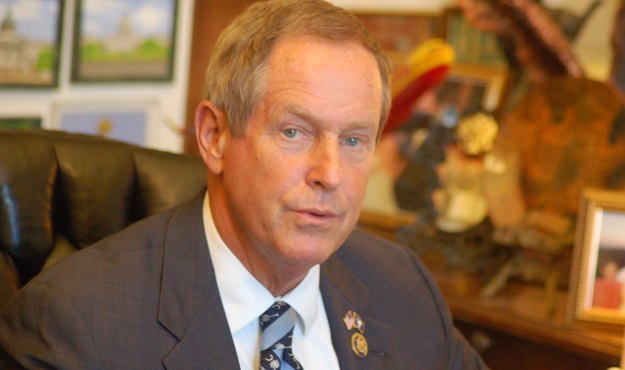 CONGRESSMAN CALLS ON OBAMA TO “SEAL THE SOUTHERN BORDER”

By FITSNEWS || U.S. Rep. Joe Wilson – a “Republican” from South Carolina – says the creed of Islamic militant group Hamas could lead to the intentional spreading of the deadly Ebola virus in America.

Yeah … this issue may have officially “jumped the shark.”

“I’m very concerned,” Wilson said during a speech this week. “We had people who, I’ll repeat it, the creed of Hamas: We value death more than you value life. What? That’s their creed.”

According to Wilson, “part of their creed would be to bring persons who have Ebola into our country.”

“It would promote their creed,” he added.  “And all this could be avoided by sealing the border, thoroughly. C’mon, this is the 21st century.”

That or naming a former Joe Biden bureaucrat as the national “Ebola czar.”  Same difference, right?

News of Wilson’s remarks was first reported by Andrew Kaczynski of BuzzFeed. Kaczynski made sure to note Wilson was speaking hypothetically, but anyone who’s been to the South Carolina second congressional district knows how literally his comments were likely taken.

Which we’re sure was the point …

A longtime fiscal liberal who briefly flirted with limited government as the Tea Party movement waxed in his district, Wilson is best known for the infamous “You Lie!” outburst caused by his caffeine addiction during a presidential address to Congress.

Related Topics:Andrew KaczynskiBuzzFeedEbolaHamasJoe Wilson
Up Next