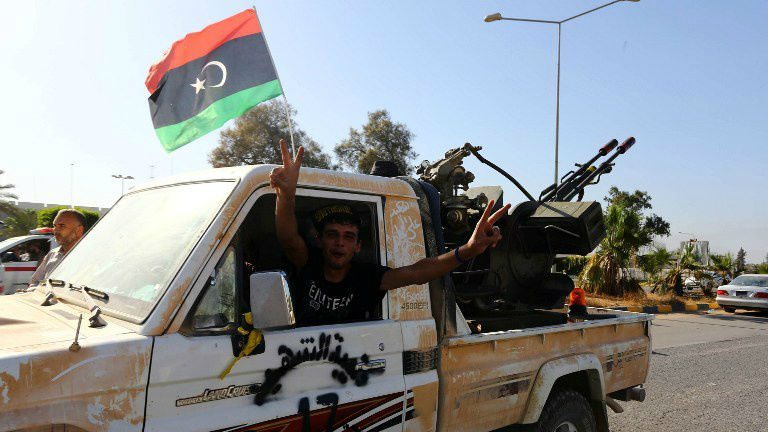 LIBYAN DEBACLE THE LATEST RESULT OF OUR “INDISPENSABLE” LEADERSHIP

Quick … we’ve got to “do something.”  The United States of America – which has bankrupted its current and future generations by (among other things) intervening in conflicts around the globe – is once again seeing the sad result of its meddling.

And no … we’re not talking about Iraq this time.

America – bragged on by its president Barack Obama last week – intervened in Libya in 2011 via Operation Odyssey Dawn, which unilaterally (and without congressional authorization) engaged in militarily-driven regime change.  You know … despite the Obama administration’s assurances that our country was “not engaged in militarily-driven regime change.”

“This is not an outcome the U.S. or any of our partners sought,” Obama said at the time. “We cannot stand idly by when a tyrant tells his people there will be no mercy.”

Okay … never mind that the tyrant had been instrumental in holding radical jihadists at bay, and his ouster resulted in a complete and total disintegration of the country.  It’s also led directly to the overthrow of a democratically elected government in neighboring Mali – where stockpiles of arms fell into the hands of groups like al-Qaeda in the Islamic Maghreb and Ansar Dine, who used them to impose a radical sharia regime in the northern part of the country.

What’s happened since then?  Well for starters … Benghazi happened.

And more recently, a coalition of militia groups has successfully routed Libya’s puppet regime from Tripoli – seizing government buildings and declaring a new revolution under the name “Libya Dawn.”

“The (Libyan) government reiterates that these buildings and the public headquarters are not safe and inaccessible, because they are under the control of armed men,” a statement from the puppet government noted.

In addition to government offices, “Libya Dawn” has seized numerous commercial airplanes at Tripoli airport – jets it could conceivably use in regional terror attacks.

What a mess … and once again, it is a mess of America’s making.  One in which our costly intervention has backfired and made us less safe .

The price is still rising, too.  While the United States is too busy attacking Iraq and warmongering in Syria to re-engage in Libya … for the moment … our government is sending attack helicopters and other military assets to Egypt, which is preparing its own intervention.

Related Topics:LibyaMaliOperation Odyssey Dawn
Up Next