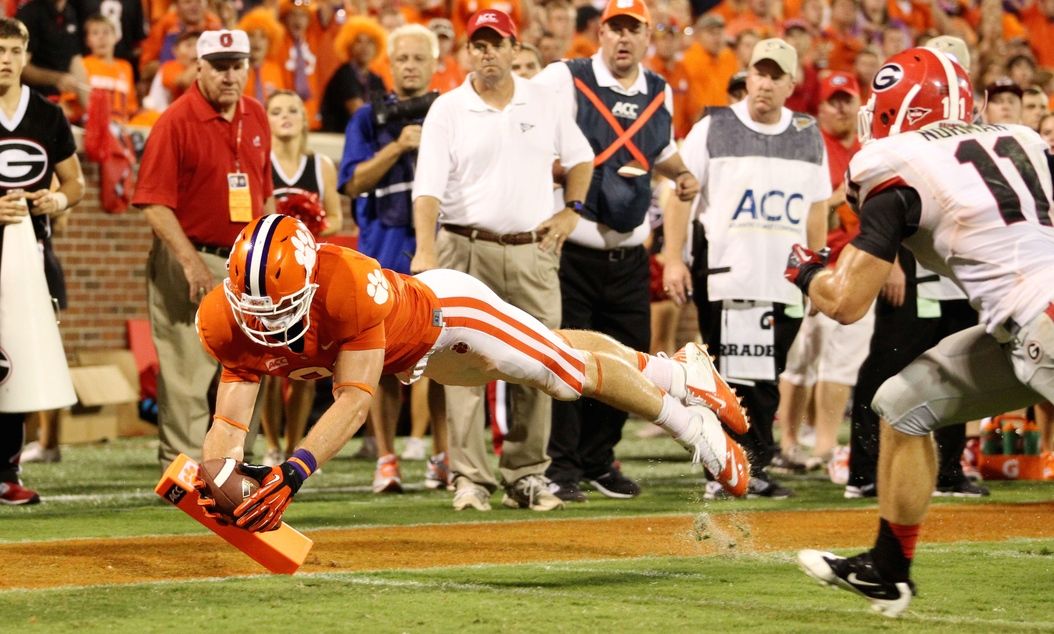 TIGERS WILL PULL UPSET IN ATHENS

The 2014 season isn’t off to the best start when it comes to our #FITSPicks.  After displaying an uncanny knack for calling games in 2012, our crystal ball got a bit cloudy last year – and this year we were way  off with our first pick of the new season.

South Carolina 38 Texas A&M 22?  Ummmm  … yeah.  Subtract ten from the former, add thirty to the latter and you’ll get the end result.

Anyway, last year we went out on a limb and picked Georgia to win on the road against Clemson.  That pick didn’t work out so well either, as Clemson dispatched the Dawgs 38-35 in Death Valley.  Not only that, they embarked on an SEC-style 12-play, 87-yard scoring drive in the fourth quarter to seal the deal.

This year we’re picking Clemson to win … which is seen by many as a crazy pick given that this year’s game is between the hedges in Athens, Georgia (and given that the Bulldogs boast arguably the best player in the country in running back Todd Gurley).

Of course it’s not just that … there are any number of reasons why picking Clemson to win is crazy.

“52 weeks ago, Tajh Boyd played what was at the time the best game of his life … Gurley was injured for about 11 minutes of game action in the first half … Georgia had a 1st-and-goal on the Clemson 5 late in the third quarter, and ended up muffing a field-goal hold … Sammy Watkins had a Tiger Paw on his helmet … the game was in Death Valley … and yet, Clemson won by a mere three points. Anyone who picks Clemson to win the rematch isn’t necessarily nuts, but they’re going out on a limb, period,” wrote columnist Seth Emerson of The (Macon, Georgia) Ledger-Enquirer .

He’s absolutely right … and those are all good reasons why the odds makers have installed Georgia as a 7.5-point favorite at home.

Teams don’t lose talent like Watkins (who caught six passes for 127 yards and a touchdown against the Bulldogs) and not miss a beat.

So … why do we think they’re wrong?

As ESPN’s Andrea Adelson notes, Georgia has a history of failing to fulfill expectations under Mark Richt – who is probably the most overrated college football coach in America.

“The Bulldogs have almost become synonymous with unmet expectations,” Adelson observed this week. “Since 2008, they have started every season ranked in the preseason AP Top 25.  Three times, they ended the season unranked.  Only once did they finish the season ranked higher than where they started.  They have lost three or more games five times over that six-year span.”

More to the point, Adelson points out that this year’s Clemson team is lead by it’s defense – which has evolved into one of the nation’s elite units in the two years since West Virginia throttled it in record-breaking fashion in the 2012 Orange Bowl.

Of course we think Clemson’s offense will run efficiently – if not explosively – under new starter Cole Stoudt.  And as our founding editor has predicted over on his Twitter feed, look for true freshman DeShaun Watson to make an impact on offense as well.

Clemson also has something to prove: The proverbial chip on their shoulders.  With the exception of their arch-rival South Carolina, they’ve had the SEC’s number over the last few years – yet they still get no respect?

Look for that to change Saturday in Athens …

@fitsnews damn it, Will. Now we’re doomed for sure. #thanksfornothing

How Far Will The Gamecocks Fall?